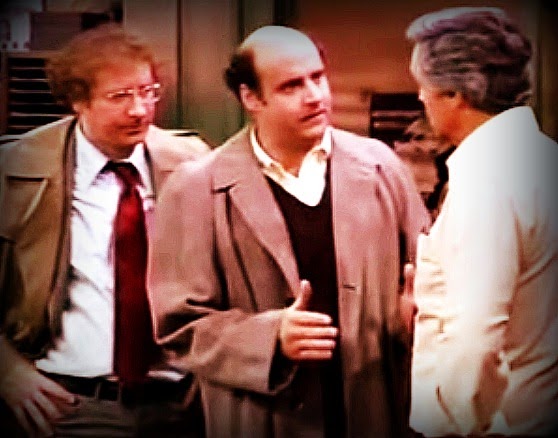 In what some may call a deliberate sequence of predictive programming, there is a little-remembered scene in the show Barney Miller, where an arrested man is trying to warn people of the true nature of the Trilateral Commission – founded in 1973 by David Rockefeller ostensibly to “foster” global political cooperation. (Ironically, the arrested man who broke into the Trilateral Commission office is played by Jeffrey Tambor who is more recently known for his role in Arrested Development.)

Right away, he is painted as a “conspiracy nut” and a crazy man for suggesting a true goal of a one world government and TC’s role with Rockefeller calling the shots. His “documents” include conspiracy magazines with titles like “Suppressed Truth Roundup.” An incredible amount of truth is revealed – only to be laughed at and presented as a random filler; a small, silly plot contrivance.

“The Crazy Man” doesn’t believe the President is actually elected in a democratic or republic fashion but that David Rockefeller “picked up a phone, put in a call” to have George H.W. Bush simply installed as Vice President. In other words, “they” run everything. “No matter who won in November they had their man in the White House!” he says.

Creepily, Bush would become President followed by his son and talk of his other son as a possibility for the 2016 election.  Trilateral Commission’s co-founder was none other than Zbigniew Brzezinski, current adviser to President Barack Obama and telling author of The Grand Chessboard. This is another indicator that left/right politics are merely two sides of the same coin.

None of this would have made any sense to TV viewers in 1981 unless they had just read Holly Skylar’s book on “Trilateralism” and its shaping of the New World Order. But no doubt, it will make sense to most of our readers – at least upon a little research where one finds that the arrested man’s predictions have proven true. The laugh track was so useful for guiding viewers who were already in a trance to simply laugh at true statements and pass them off as either crazy or…comedy. (Comedy is powerful, but sadly is often hijacked to force people into acceptance.)

Yet, David Rockefeller himself reveals in Memoirs (2003):

Some even believe we are part of a secret cabal working against the best interests of the United States, characterizing my family and me as ‘internationalists’ and of conspiring with others around the world to build a more integrated global political and economic structure—one world, if you will. If that is the charge, I stand guilty, and I am proud of it.

Henry Kissinger, mentioned on Barney as a member and who is a lifelong trustee, says the current definition of terrorism is anyone who doesn’t go right along with the new international system.

The popular and award-winning Barney Miller was useful in culture creation and predictive programming. The very same year this episode aired, just one year before the series ended, B.M. featured a push for police to wear more gear like bullet-proof vests, religious tension in the community and a survivalist couple trying to live in the sewer system. The couple had canned goods and unregistered guns. They were a gift from a character who was the owner of Armageddon Supply – and a mini-mart. Yes…nothing to see here, just coincidences.

Do any of you remember this episode and does this scene ring a bell?

Thanks to Carlos Garcia for sharing this on Facebookhttps://www.facebook.com/video.php?v=…

Full episode here https://www.youtube.com/watch?v=aYql4… at the 23:24 mark the detective reveals that he is part of the trilateral commission. [Dietrich casually reveals he is a member and starts taking notes from Klein for a future board meeting!!]

Explore more on Activist Post about the Trilateral Commission