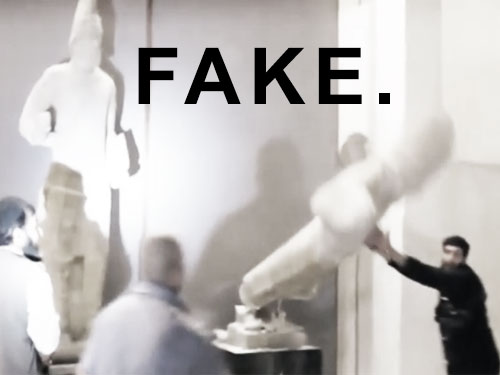 Anyone who doesn’t know who funded, trained, armed and essentially created ISIS at this point needs to please do some research and wake up.

They are essentially like little toys being scooted around on the giant world Risk game board for the purpose of spreading fear and reshaping the Middle East in the way the empire-building nations of the West (including Israel) sees fit.

The story on RT begins:

The ancient statues that Islamic State militants smashed in Mosul on camera last month have been proved to be exact replicas of precious artifacts of Iraqi heritage. The real masterpieces of antiquity are said to be in Baghdad.

“They were copies. The originals are all here,” Baghdad’s museum director told Germany’s Deutsche Welle.

The head of the antiquity department in Iraq’s cultural heritage authority, Fawzye al-Mahdi, also told the German broadcaster that “none” of the artifacts “were originals.”

This, experts say, explains why in a video that shows the destruction statues crumble so easily.

“The reason they crumble so easily is that they’re made of plaster. You can see iron bars inside,” Mark Altaweel of the Institute of Archaeology at University College, London said to Channel 4.

So the whole story, complete with dramatic video, was about replicas…

That didn’t stop another wash of mainstream media attention given to the idea that ISIS the almighty and powerful was tromping the countryside, destroying precious, ancient, irreplaceable 2700-year-old artifacts and robbing the world of them forever.

The Diplomat: ISIS Is Destroying Priceless Artifacts. Here’s How to Stop Them.

None of these outlets has posted a new story that I could find correcting their previous information about how these items were just fakes and the 2700-year-old irreplaceable items were actually totally replaceable replicas.

CNN really went to town whipping people up in a frenzy over it, complete with replay after replay of the video of the fakes being destroyed in dramatic fashion, sometimes slow motion, in multiple stories throughout the last few weeks:

I just did a search and couldn’t seem to find it.

Guess all those ill-informed CNN viewers have absolutely no idea what really happened since they barely even get one side of the news to begin with; they only know that they should be more upset and shaking in their boots and afraid of the wrath of ISIS with every passing day…

Then again, CNN is the same channel that insisted ISIS is able to lure women with the magical powers of Nutella and kittens… for real.

Yeah, well, at least some of us weren’t buying the ISIS beheading videos either.

More ridiculous ISIS propaganda, brought to you by The Daily Sheeple:

Even Senator McCain ‘Accidentally’ Refers to the Syrian Rebels as ‘ISIS’

The U.S. Veteran Fighting ISIS in Syria is Obviously a Propaganda Shill