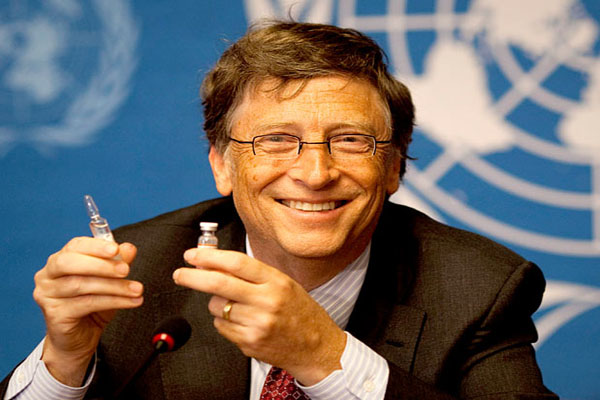 If one wants to know what is going to happen with regard to an illness and/or a vaccine, it would be best to pay attention to what Bill Gates has to say. After listening and reading what Bill Gates has to say about this topic, coupled with  some of Gates’ more notable investments, it is difficult to not conclude that humanity is in for some very dark days when it comes to the return of Ebola and the re-emergence of several deadly viruses.

On February 28, 2013, Bill Gates appeared on the Charlie Rose Show and he was as candid as a globalist could be. On the show, Gates indicated that he has contributed large sums of money to numerous causes such as the Global Polio Eradication Initiative originally launched in 1988 by the World Health Organization (WHO), the CDC, and UNICEF.

Gates expressed his love affair with vaccines and his clear intention to reduce the world’s population when he stated the following:

“The world today has 6.8 billion people… that’s headed up to about 9 billion. Now if we do a really great job on new vaccines, health care, reproductive health services, we could lower that by perhaps 10 or 15 percent.”

Quite clearly, Gates is a devoted subscriber to Eugenics and depopulation. On his television show, Charlie Rose asked Gates the following question:

You mentioned the five or a six year plan the new initiative has learning from old lessons and therefore, coming up with new approaches. What are the new approaches?

To that question, Bill Gates answered:

Well, we’re able to use new technology like satellite photos to see are there people moving around, nomadic roots. You know we see if when we go out to get all the children, if there’s some settlement areas that we’ve actually missed. We also put a – – a phone in the vaccine box they carry around that looks where they’re located every three minutes and so it has that GPS data. At the end of the day you plug that in and compare it to where they were asked to go, and you can see if you’re –you’re really covering all the kids.

Gates is clearly advocating for an extreme Orwellian society that will be monitored and targeted for vaccinations that do more harm than good. The ultimate goal is depopulation, not saving lives. Unfortunately for the fate of humanity, Gates seems to know something ominous is coming our way when we consider what Gates recently wrote in the New York Times.

On March 18, 2015, the King of vaccinations  wrote an editorial piece in the New York Times in which he stated that the “Ebola epidemic in West Africa has killed more than 10,000 people. If anything good can come from this continuing tragedy, it is that Ebola can awaken the world to a sobering fact: We are simply not prepared to deal with a global epidemic“.

“As menacing as Ebola was this past year, other pandemics are a greater threat to the human race.

The Ebola epidemic in West Africa has killed more than 10,000 people. If anything good can come from this continuing tragedy, it is that Ebola can awaken the world to a sobering fact: We are simply not prepared to deal with a global epidemic.

Gates spoke about the deadly Spanish Flu and other epidemics which could (probably will) serve to threaten humanity. Frighteningly and prophetically, Gates is advocating for the United Nations to “fund a global institution” to coordinate the efforts to conduct mass vaccinations. Would anyone like to place a bet that the new round of vaccinations will be mandatory? The United Nations and the World Health Organization would be in charge according to Gates. After all, according to Gates, Ebola was terrible, but next time, “it could be much worse“.

Gates Has Already Put His Money Where His Mouth Is

Can we only imagine the enormous profits that can be realized by vaccinating every child in the third world? If we apply Gates’ penchant for investing in causes which produce a hefty “return on investment” (ROI) then one could reasonably suspect that Gates is positioning himself to profit on the $50 million he has invested in the Ebola cause which conveniently includes the CDC, the holder of the patent for Ebola.

Eventually an unsuspecting public will finally be told of the existence of an Ebola vaccine, and the Global Fund will be in charge of distribution. Interestingly, Bill Gates has donated a total of $560 million dollars to the Global Fund. The Global Fund has also positioned themselves to be in charge of the distribution of the “newly developed”, and not yet announced vaccines for TB and HIV.  Since the goal is the vaccination of every man, woman and child on the planet with multiple vaccines, Gates’ $560 million contribution to the Global Fund is chump change compared to the expected ROI. However, on deck is the return of the Ebola virus.

Bill Gates lust for vaccines knows no bounds. At his and other “philanthropists” (i.e. psychopaths) encouraging, global researchers have begun to reconstitute old viruses, presumably for the purpose of developing vaccines for the deadly pandemics of the past.

In the near future, we may wish we would have followed the old axiom, “Let sleeping dogs lie”, because in an act of extreme insanity, the Spanish Flu has been reconstituted, by the Center for Disease Control researchers. The reconstituted virus was obtained from frozen tissue samples from a female who died from the virus in the 1918 outbreak.

Unfortunately, the Spanish Flu is not the only pandemic which is being reconstituted and this means even more vaccines for Bill Gates. How many will die in order that Gates and his partners will realize a hefty return on investment?

The jury is not out on Bill Gates. He is a man who speaks his mind. In his New York Times editorial, Gates warns us about the return of Ebola as well the re-emergence of other deadly viruses. It would be a grave mistake to not take Bill Gates seriously. What does Bill Gates know that we do not?