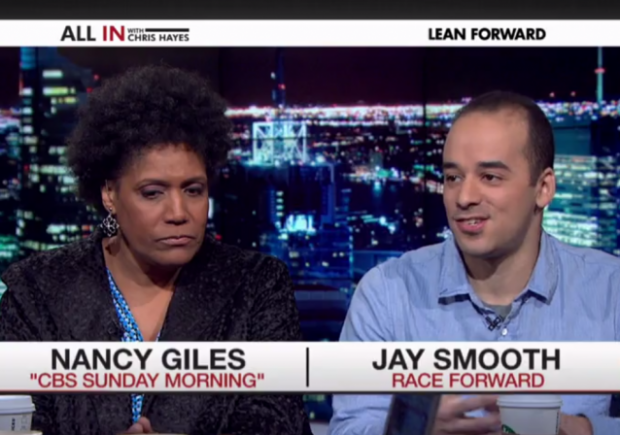 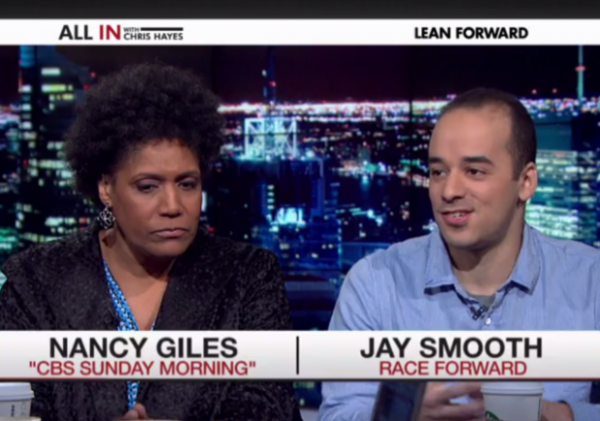 CBS Contributor Nancy Giles joined radio hip-hop DJ Jay Smooth to discuss the new Starbucks #RaceTogether campaign. After several minutes of discussing race relations in modern day America MSNBC showed a clip of Jay Smooth in which a rap instrumental was playing in the background and he said that it’s time we hold people accountable for their words and actions. In the video Jay, who is fair-skinned, used a vernacular often associated with African-Americans.

Giles, who remained respectful during the entire discussion, apparently suggested that he was co-opting black culture to get his point across.

The conversation got a little awkward considering it was about making assumptions based on race… and the fact that Jay Smooth is actually African-American, and not white, as Nancy Giles assumed:

Nancy Giles: I can’t not tease Jay about the kind of, like, brotha way he was trying to talk… and you know, like, with the rap music in the background… and being down with the people

Nancy Giles: I know, it’s another interesting, funny thing about race. There would be some people that feel that you co-opted something like that… and there would be other people who feel like that’s his background and that’s cool… it’s really interesting.

Jay Smooth: It’s also interesting because I’m actually black, which you assumed otherwise… and this is the sort of awkwardness we can look forward to in Starbucks across America.

Watch the interview (if you’re short on time, skip ahead to about 5:15 into the video):