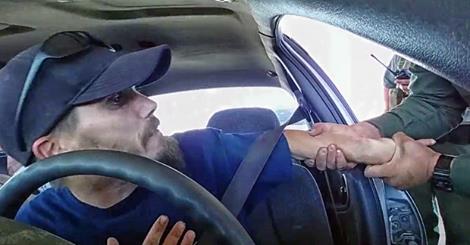 A family of three were coming through a Border Patrol station that was more than 50 miles inside the US border. Upon pulling up to a Border Patrol agent, the man was asked where he was going and in response the man said he didn’t have to answer the question, which is true under the law. Agents then pulled him from the vehicle and arrested him.

Understand that Border Patrol is an unconstitutional agency under the Executive Branch of the federal government. Our Constitution does not provide for a Border Patrol agency at all, much less one that is located away from the border.

According to the dashcam video of the incident, the husband and wife and son were having a little talk back and forth before their approach of the Border Patrol agent. Once the vehicle was stopped, here’s how the incident went down.

“How are you, where are you going to today?” asked the agent.

The question was repeated and the man refused to answer the question. As a result, the man was asked to pull his car over and park it. The man refused and you can see the agent’s hand illegally slip in through the window in an attempt to get inside the vehicle.

“Get your hands out of my car,” the man told the agent. He forces the agent’s arm out of the car as the agent unlawfully opens his door and attempts to pull him out of the vehicle, even though he still has his seat belt buckled.

“Dude what is your problem?” the man asked in frustration. “I’ve got to unbuckle my seatbelt. … You’re being recorded.”

“This is assault,” he said. “What is your reasonable suspicion?”

The man is alluding to the Fourth Amendment, something that is supposed to be upheld by these people.

The man does answer the question of his citizenship as a “United States citizen.” His wife also affirms she is a citizen.

The agent then asks if there is anything in the trunk. The man says there is not and specifically tells the agent that he does not have his consent to either search the vehicle or seize anything.

The agent is once again asked for a reasonable suspicion, which he is denied. He is then forced out of the car and handcuffed.

While the agent acknowledged being recorded, his response for why he did what he was doing was that it was not “against policy.”

Maybe it’s not against “policy,” but it is surely against the law. The Fourth Amendment states clearly:

The agent then entered the car and moved it and as he did, he claimed that the dog alerted to the car, but he added, “Your husband put us in a bind.”

Well, what about the bind these gestapo-style thugs put this family in?

Furthermore, the four-year-old didn’t want the Border Patrol agent anywhere near him. He screamed, “I don’t like you!”

The agents are clearly violating the Fourth Amendment as they begin to search the vehicle without permission, without a reasonable suspicion and without a warrant that would detail exactly what they are looking for. Clearly, they did not want the incident to continue to be recorded and the agent is seen turning off the camera.

Furthermore, these Border Patrol stations are not to be used to look for drugs as an initial reason for such apprehension. That is expressly forbidden as I have recounted before.

The man has been identified as Rick Herbert and the Border Patrol agent who violated Herbert’s rights was J. Valdivia, according to his tag. The incident occurred on March 12, 2015 at a checkpoint 35 miles north of El Centro, a border town in California, east of San Diego. The video was uploaded on March 17, 2015. An account has been set up to help the family with attorney fees. If you wish to help, click here.

For some people to say, “Well, if had only answered the question posed to him, none of this would have happened” is to miss the point of who is doing what is unlawful in the first place.