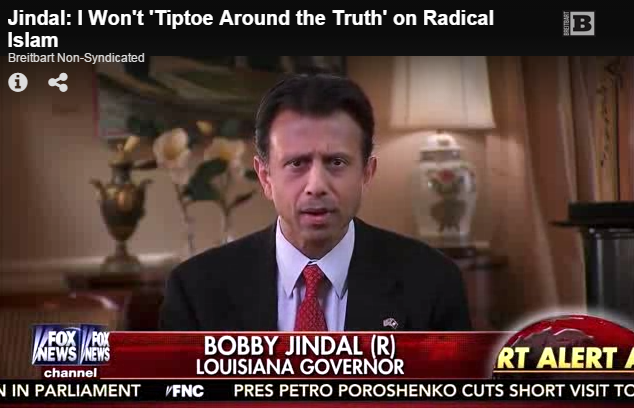 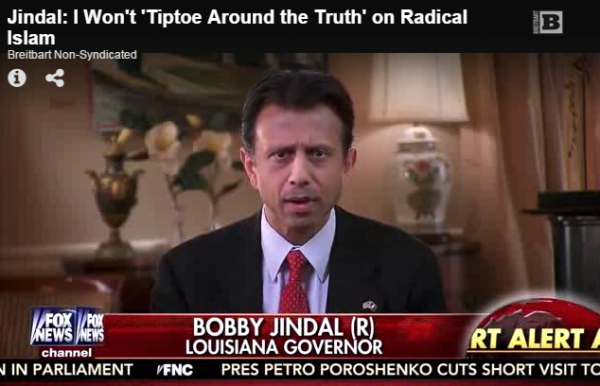 “In the west, I believe we have a responsibility,” Jindal told the American Action Forum, a conservative think tank, “to insist that those coming into our societies, those who come to our country, assimilate or integrate.”

IB Times: “What he is doing is fearmongering,” said Haris Tarin, the director of the Washington office of the Muslim Public Affairs Council. “This is another one of those issues where he is using fear to garner votes and the latest in a line of remarks he has made over the past few months to try to seem relevant for the 2016 elections.”

Jindal is attempting to exploit a “common fear of Muslims” in the U.S. with an eye toward the elections, said Corey Saylor of the designated terrorist group CAIR (Council on American-Islamic Relations). “It’s an unfortunate reality that some politicians will pick on minorities rather than offer solutions to the economic and real national security issues our country faces.”

As the 2016 election campaign begins to ramp up, Muslims in America fear Jindal, a Christian convert who was born a Hindu, will not be alone in attacking Islam to score points. (Hopefully) “We have seen this happen in every election cycle since 2006,” said Tarin. “Muslim issues have become the new gay issues and abortion issues. You can’t get away with using the gay community for political football anymore but you can still do it with Muslims, unfortunately.” (Maybe that’s because gays aren’t killing people, but Muslims are.)

Jindal has also made a point of publicly countering the Obama administration on foreign policy issues and recently accused the president of not being honest about the threat posed by radical Islamic terrorists. “It’s time for our president to have the fortitude to tell the American people the truth about radical Islam and put his political base aside so we can defeat these terrorists,” he wrote in a Feb. 23 editorial for Fox News.

Jindal used ISIS as his primary example but also said the first Muslim Brotherhood (CAIR‘s parent organization) includes “ideologies that are hostile to our interests.” ‘If we don’t insist on assimilation, we then go the way of Europe” (allowing mass Muslim immigration, which will create Islamic republics there).

“So in other words, we shouldn’t tolerate those who want to come and try to impose some variant of, some version of, Sharia law,” Jindal said. “I fear if we don’t insist on assimilation,” he said, “we then go the way of Europe.” European cities, he said warily and without specified examples, included neighborhoods in which women felt afraid to walk without veils.

Jindal said it was “nonsense” that such remarks, which follow comments made in London about Muslim “no-go zones,” might be perceived as “racist or anti-Muslim.” He refused, however, to backtrack from any such comments, saying, “Islam has a problem.”