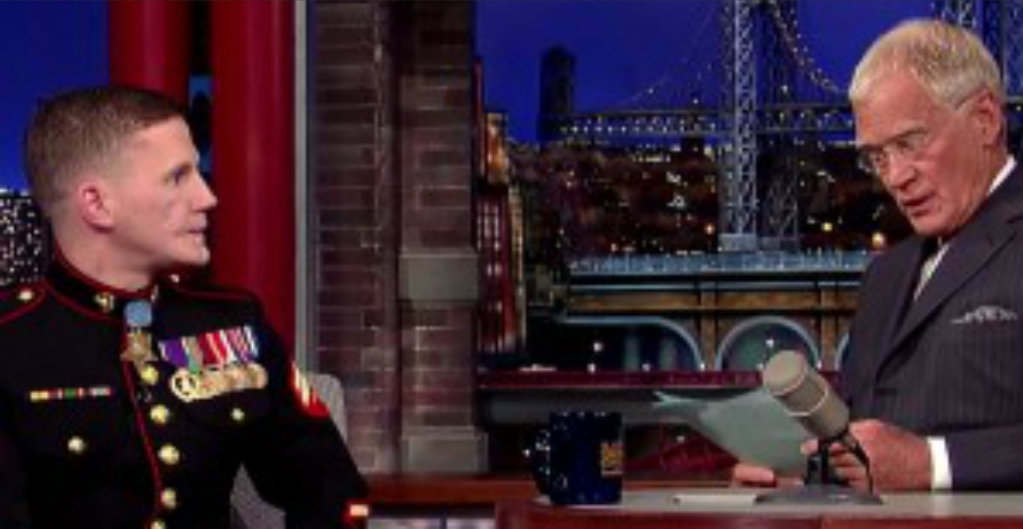 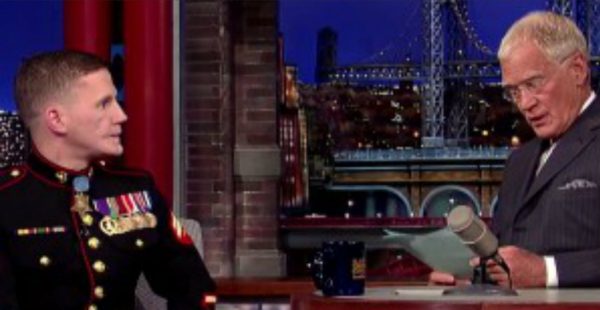 Medal of Honor Recipient Cpl. Kyle Carpenter, a US Marine, had his injuries described (which he suffered at the hands of Muslim jihadists in Afghanistan) to the audience of David Letterman last year. The audience was speechless, and you will be too.

Letterman said that he wanted to highlight the injuries suffered by Cpl. Carpenter and the Marine jokingly said, “I’m not hiding it from anybody.”

The injuries suffered by Cpl. Carpenter as a result of an enemy grenade attack were as follows:

In fact, not only did he flatline three times, but they assumed that he was dead at the scene of the explosion. He was labeled as PEA (Patient Expired on Arrival) as he was brought to Camp Bastion.

Carpenter had received some 40 surgeries, over a two and half year period, at the time of the Letterman interview, which was conducted in June of last year.

However, Cpl. Carpenter, who trained heavily to compete in the Marine Corps Marathon, became the second Marine since the Vietnam War to receive the Medal of Honor.

Most of Cpl. Carpenter’s face, from the eyes down, is facial reconstruction. He made no hesitation in crediting Walter Reed hospital and the physicians there with what they had done to help him.

His first memories after the grenade attack were five weeks later, when he awakened to see his mother had outfitted his room to fit the Christmas holiday.

Letterman, not knowing what to say, said, “Thank you for your sacrifice. I hope my son does not ever have to go through what you’ve gone through, but in some way, I hope he is able to manifest the same courage.”

While we can debate the constitutionality of wars in the Middle East and our involvement there, one thing should stand out from what Cpl. Carpenter has endured: His sacrifice.

He was willing to put his life on the line for the America he loves against an enemy with an ideology that is at war with the God of Heaven. He laid his body down fighting for the American people against America’s enemies. Is there no one that can see what our Lord Jesus did for His people in the suffering of this young Marine? I’m not trying to equate the two, but what I am saying is that there is sacrifice that is demonstrated in the physical world, that is a picture of what Christ did. Cpl. Carpenter laid down his life, believing that he was fighting to defend the freedom and lives of the American people.

Jesus Christ laid down his life for sinners (enemies with an ideology that is against the God of Heaven) to give them freedom from sin. Now, I ask you, if you are moved by the sacrifice of Cpl. Kyle Carpenter, why should you not be even more moved to obey your Creator who gave His own Son on your behalf? Why will your rebel against such a sacrifice as the Christ laid down to save you from sin? If you continue to do such things, are you not spitting in the face of the true demonstration of love (1 John 3:18; John 15:13)?