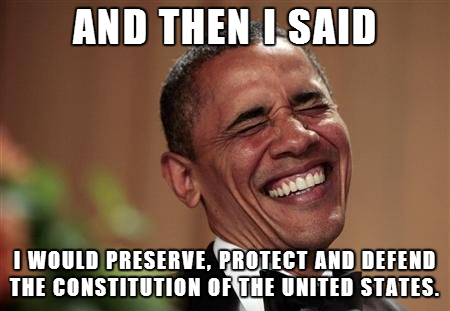 President Obama has lamented that special interests dominate the world of politics. My first reaction was to laugh out loud. After all, we are listening to the words of a politician/community activist who has done his very best job handing over the country to the communist bankers that are loosely referred to as the New World Order.  This is the same Obama who has supported continued bail-outs of criminal bankers, has overseen and mandated a failing education system (i.e. Common Core), and has mandated a failing health care system that has instituted death panels (e.g. Obamacare age related treatment exclusions). Anytime this President has proposed anything it has either taken money out of our collective pockets or it has served to shorten our longevity, or both! So, you will excuse me when I look upon Obama’s insistence that voting should become mandatory with great suspicion.

President Obama’s answer for the undue influence of the bankers in politics is to FORCE people to vote. Yes, that is right, your President wants voting to become mandatory! Isn’t this the same President that handed over 18% of our economy to four managed care companies in the form of Obamacare while this served to drive the price up dramatically?  Gee, Mr. President, you force America to take your substandard Obamacare under the threat of fines and going to jail, and now you are telling us that we must vote or face fines or going to jail? How long will it be until we have elections, with only one choice, of which we are forced to vote in our approval or face fines or go to jail? This reminds me of the old style Soviet elections where the people had one choice and the citizens voted for it, or they paid fines and went to jail.  I don’t know if I am living closer to communist Cuba or North Korea. By the way, mandatory voting has its roots in communism.

SOON, AMERICANS WILL BE FORCED TO VOTE FOR THEIR OWN DEMISE

Haven’t we learned that when we allow the federal government to mandate concepts like social justice and how we live our lives, it is a prescription for disaster? Just how good of a job did Goals 2000, No Child Left Behind and now Common Core do with regard to educating the country’s children? Does anyone else realize that Department of Education is unconstitutional? How many of these failed and federally mandated initiatives do we have to subject our children to in order to realize that goal is the continued “dumbing down of America“.  Literacy rates, attention spans and citizen awareness are at an all time low. If you want to improve education, get the Federal government out of the education business. The following video is a testament to what happens when the government mandates anything such as one on their endless list of failed education programs.

One unmistakable truth about what we are witnessing here, is the establishment of the first American dictatorship in American history. Shadow Stats, John Williams, states that the actual unemployment rate is 23.5% and that there has never been any recovery of the housing market. Meanwhile, we are told that the economy is fine and we should go back to sleep. It is just one failed program after another. We are seeing one failed lie after another. By the way, John Williams will be my guest this Sunday evening on The Common Sense Show as we unravel the economic lies coming out of the Obama administration.

Now we are also seeing financial institutions, like Fannie Mae is on the verge of receiving a bailout with your tax dollars. How is this new and trendy dictatorship working out for us, America? More bailouts with more debt and eventual and total enslavement courtesy of the dictator residing at 1600 Pennsylvania Avenue who may never leave office.

Ron Paul warned us over a generation ago that if we were not careful, we would one day wake up and our Constitutional liberties, our traditions and our country would be gone. My own father said that one day, we would be a country of blithering idiots. Both men were right and that day has arrived!

America, rest in peace, GAME OVER!