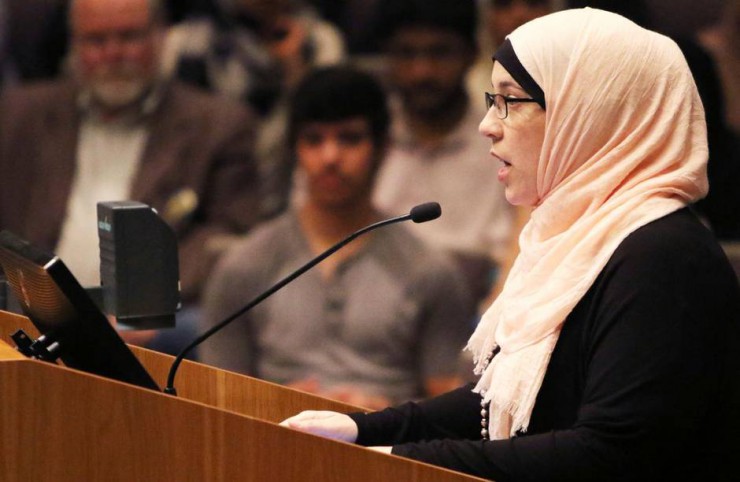 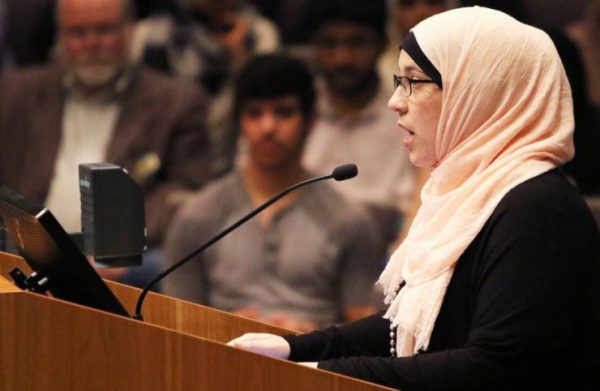 The intense national spotlight on Islam has shifted to Irving, where Mayor Beth Van Duyne has accused mosque leaders of creating separate laws for Muslims and the City Council voted Thursday to endorse a state bill that Muslims say targets their faith. (You can practice your so-called ‘faith’ in 56 countries. Pick one)

Dallas News: The dispute has made Van Duyne a hero among a growing movement that believes Muslims are plotting to take over American culture and courts. “It fuels anti-Islamic hysteria,” said Zia Sheikh, imam at the Islamic Center of Irving. “Her whole point was to rile up her supporters. … The problem is we become the whipping boys.”

The mayor stands by her statements, including an interview with former Fox News host Glenn Beck last month, when she said Sheikh and other imams were “bypassing American courts” by offering to mediate disputes among their worshippers according to an Islamic code called Sharia.

The mediation is advertised as voluntary, nonbinding, and in harmony with the law. But it has led Van Duyne to back a bill by state Rep. Jeff Leach, R-Plano, that would forbid judges from using foreign law in their rulings.

While the bill does not mention religion, Leach has singled out the Islamic mediation panel as a “problem” it will solve. The wording is largely identical to that in a previous bill pitched by another lawmaker as a way to stop the influence of “large populations of Middle Easterners.”

Muslims in hijabs, burqas and business suits packed City Hall on Thursday, voicing protests before the council endorsed the bill in a 5-4 vote. “This bill does not reference Shariah, Islam or even religion. It has nothing to do with preventing any tribunal,” Van Duyne told the crowd. “Why anyone would feel this is hatred or bigotry is absolutely beyond me.”

“This is how it starts,” a Breitbart.com writer warned, sharia law courts/tribunals are the “vicious, misogynistic, and brutal” systems in other countries. The Islamic Tribunal, a panel of Dallas-area imams, offers to mediate disputes between Muslims for a fee.

While the tribunal is headquartered in Dallas, blog posts around the country pegged its home as Irving: the purported ground zero in a Muslim takeover of the U.S. legal system. Irving’s perceived link went viral with a February Facebook post in which Van Duyne vowed to contact state legislators and “fight with every fiber of my being” if the group was violating basic rights.

“Equal treatment under the law doesn’t seem to exist,” Van Duyne told Beck. “I think you need to put your foot down and say this is America, we have laws here already. If you want to consult, if you want to arbitrate, that is well within our law. … I’ve got no problem with it. But setting up a separate court, setting up separate law is not anything — ”

The mayor’s stand against the tribunal made her a celebrity in online circles. Her Facebook page filled with praise and links to headlines like “Texas Mayor Shuts Down ‘Shariah Court’ in Heroic Way.”

Worried residents flooded City Hall with calls. “I was responding to rumors about a Shariah court in Irving,” Van Duyne said. “My response was to answer questions brought up by a number of my constituents.”

The mayor said Sheikh asked for an apology and retraction of her Facebook post. Sheikh said he simply “asked her to clarify a statement … which seemed very Islamophobic.” “She flat-out refused,” he said. “She said, ‘My statement wasn’t inflammatory in any way, shape or form.'”

But it was the imam’s turn to refuse. “We don’t care about the bill,” Sheikh said. “It’s not going to affect us in any way, shape or form. The bottom line is the foundation of this bill is anti-Islamic.”

The bill is one of many to be taken up around the country that the designated terrorist group CAIR (Council on American-Islamic Relations) calls anti-Islamic. Leach’s bill doesn’t mention Islam, Shariah law, or any specific religion. It forbids judges from violating the U.S. or Texas constitution by using foreign laws to rule on family law cases.

He referenced a news story about the Islamic Tribunal and said, “You will find there is starting to be an encroachment and a movement to chip away at the ability of judges to say no to certain foreign laws.”

Leach’s bill is nearly identical to House Bill 911, filed in 2011 by Rep. Leo Berman and intentionally numbered to reference the Sept. 11, 2001, attacks by Islamic terrorists. “Shariah law … it’s the whole way of life to a certain religion,” Berman warned a House committee as he pitched his bill that year. “It’s starting in Europe because of a large population of Middle Easterners … and it could spread through the United States.”

As the City Council and statehouse consider the issue four years later, anti-Muslim hostility is getting louder in Irving. A popular Facebook group, once filled with news of ribbon cuttings and new restaurants, is now filled with rumors about Muslim courts and Muslim-only neighborhoods. Occasionally, a poster threatens violence to take the city back. (Well, this IS Texas, after all)