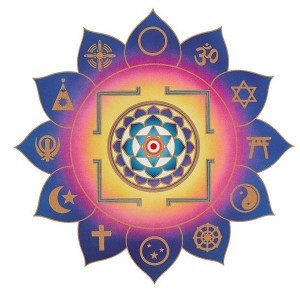 If you want as many people to attend your church as possible, why limit yourself to just Christians?  All over America, “radically inclusive” churches that embrace all religions and all lifestyles are starting to pop up.  Church services that incorporate elements of Hinduism, Islam, native American religions and even Wicca are becoming increasingly common.  And even if you don’t believe anything at all, that is okay with these churches too.  In fact, as you will see below, one Presbyterian minister in Oregon is even inviting people to “bring their own god” to church.  But if these churches don’t really stand for anything at all, what is their purpose?  And what does the popularity of these churches say about the future of religion in America?

One such church that has gotten quite a bit of attention lately is led by D.E. Paulk.  The son of Earl Paulk, he was once considered to be the “heir apparent” at one of the largest megachurches in America.  But these days he leads worship at a church that recognizes “all gods and prophets, including Mohammed“…

The Spirit and Truth Sanctuary, which D.E. founded in 2012, welcomes everyone from Wiccans to atheists, Hindus to Muslims, recognizing all gods and prophets, including Mohammed.

‘[Scandal] has a way of wiping out the things that keep you from being authentic,’ he said.

‘All you have left is who you are. The games are gone… If there was anything I wanted to say I thought would be unacceptable to the church, now is the time to say it.’

After much soul searching, D.E. established his church based around one principle: ‘Christ cannot be, and will not be, restricted to Christianity‘.

Paulk insists that there is “no hell except what one creates with one’s own actions“, and he is very proud of the diverse group of people that currently attends his services…

Today, the church is a rarity on many levels: interfaith, interracial, a mosaic of people deep in the Bible Belt where many churches remain segregated. The church has gay couples, college students, agnostics, some Muslims and even a Wiccan priest. Pictures of the Rev. Martin Luther King Jr. and Mahatma Gandhi adorn the walls.

A stained glass window looming over the pulpit captures the spirit of the church. It’s a design that contains a Christian cross, ringed by symbols from Judaism, Islam and Hinduism. In the middle is a dove, which symbolizes the spirit of peace that binds them all together.

A CNN reporter visited one of Paulk’s recent services, and it was definitely far different from what Earl Paulk’s services would have looked like in the old days…

The service then started to feel like a Pentecostal tent-revival but with an unusual twist.

A group of singers took to the stage and opened with a hypnotic Tibetan Buddhist chant that evoked the spirit of compassion: “Om Mani Padme Hum.”

The chant segued into “Shanti, Shanti Om,” a Hindu prayer for peace. Then as the chanting grew louder, the drums and bass kicked in as the singers switched to a Muslim chant about the sovereignty of God: “La ilaha, Il Allah.”

And of course D.E. Paulk is far from alone.

All over America there are ministers that are going out of their way to be more “inclusive”.

As I mentioned above, there is even one Presbyterian minister out in Oregon that wants people to “bring their own god” to church…

A Presbyterian USA minister in Oregon who says that he doesn’t believe in God—and doesn’t require his members to believe either–remarked in a recent article that he is offended by those who assert that he is not a Christian.

“Someone quipped that my congregation is BYOG: Bring Your Own God. I use that and invite people to ‘bring their own God’—or none at all,” wrote John Shuck of Beaverton’s Southminster Presbyterian Church in a guest post for Patheos last week. “While the symbol ‘God’ is part of our cultural tradition, you can take it or leave it or redefine it to your liking.”

Even though Shuck has publicly acknowledged that he does not believe in God, he insists that he is “still a proud minister”, and he gets offended when people try to tell him that he is not a Christian…

Shuck reiterated his unbelief in his article “I’m a Presbyterian Minister Who Doesn’t Believe in God” on Tuesday, as he asserted that “belief-less Christianity is thriving.”

“We all have been trained to think that Christianity is about believing things,” he wrote. “Its symbols and artifacts (God, Bible, Jesus, Heaven, etc) must be accepted in a certain way. And when times change and these beliefs are no longer credible, the choices we are left with are either rejection or fundamentalism.”

But Shuck says that although he rejects the Bible as being literal, and denies the existence of Heaven and Hell, he takes offense when people tell him that he’s not a Christian.

“Even though I hold those beliefs, I am still a proud minister. But I don’t appreciate being told that I’m not truly a Christian,” he stated. “Many liberal or progressive Christians have already let go or de-emphasized belief in Heaven, that the Bible is literally true, that Jesus is supernatural, and that Christianity is the only way. Yet they still practice what they call Christianity.”

Elsewhere in the Northwest, other ministers are trying similar approaches.

Clad in proper Pacific Northwest flannel, toting a flask of “rocket fuel” coffee typical of Starbucks’ home turf, Steven Greenebaum rolled his Prius into a middle school parking lot one Sunday morning last month. Then he set about transforming its cafeteria into a sanctuary and himself into a minister.

He donned vestments adorned with the symbols of nearly a dozen religions. He unfolded a portable bookshelf and set the Koran beside the Hebrew Bible, with both of them near two volumes of the “Humanist Manifesto” and the Sioux wisdom of “Black Elk Speaks.” Candles, stones, bells and flowers adorned the improvised altar.

Some of the congregants began arriving to help. There was Steve Crawford, who had spent his youth in Campus Crusade for Christ, and Gloria Parker, raised Lutheran and married to a Catholic, and Patrick McKenna, who had been brought up as a Jehovah’s Witness and now called himself a pagan.

Other churches are attempting to become more “inclusive” by being willing to embrace alternative lifestyles.

For example, one of the largest evangelical churches in San Francisco has decided to take a new approach to the LBGT community…

Now, San Francisco’s City Church is putting an end to its policy of banning LGBT members who are unwilling or unable to take a vow of celibacy.

What led to the change of heart at City Church? Apparently, Ken Wilson’s book A Letter to My Congregation was a big part of it. Fred Harrell, senior pastor of City Church, feels the mind-changing book “shows great empathy and maturity to model unity and patience with those who are at different places in the conversation, all while dealing honestly with Scripture.”

“Our pastoral practice of demanding life-long ‘celibacy,’ by which we meant that for the rest of your life you would not engage your sexual orientation in any way, was causing obvious harm and has not led to human flourishing,” Harrell wrote in a letter to the church from the elder board. “It’s unfortunate that we used the word ‘celibacy’ to describe a demand placed on others, as in Scripture it is, according to both Jesus and Paul, a special gift or calling by God, not an option for everyone.”

But if people can just “believe whatever they want”, what makes these churches “Christian” at all?

We live in a society in which it has become very trendy to “choose your own path” and in which nobody wants to do anything that might “offend” someone else.

For instance, consider the words that one CNN reporter used to describe her transition from “Christian” to “seeker”…

After years of spiritual reflection and inquiry, I am at a place where I don’t want to feel guilty, hypocritical, judgmental, closed-minded or arrogant. So, where do I stand now — 30 years after “finding God,” questioning my faith, committing sins, seeking hazardous adventure and trying to love life and people to the best of my ability?

I am a “seeker.” A constant seeker within this world, among people and, of course, for spiritual enlightenment of all kind. Because if I did possess the truth — the “final answer” — I am convinced I would spend the rest of my years missing out on the enrichment and surprise of seeking it.

Those are some lovely words.

But it almost sounds as if she is actually afraid of the truth.  It is almost as if she does not want to find it, because if she did it might offend someone.

In the final analysis, this CNN reporter is just like so many other Americans.  Most people end up believing exactly what they want to believe.  And what this CNN reporter wants is to avoid feeling “guilty, hypocritical, judgmental, closed-minded or arrogant”.

Of course there are thousands upon thousands of Christian ministers all over the nation that want the same thing.  They never use the word “sin” because they want people to feel good about themselves.  And they never talk about anything controversial because they want people to keep coming back and they want the donations to keep rolling in.  So they preach messages about how wonderful everyone is and about how God wants to help all of us “achieve our destinies” and make all of us very wealthy.

But meanwhile our nation continues to swirl even farther down the toilet.

In the Scriptures, we were warned that such a day would come…

For the time will come when people will not endure sound doctrine, but they will gather to themselves teachers in accordance with their own desires, having itching ears, and they will turn their ears away from the truth and turn to myths.

So what do you think about the state of religion in America?

Do you believe that churches are headed in the right direction or the wrong direction?