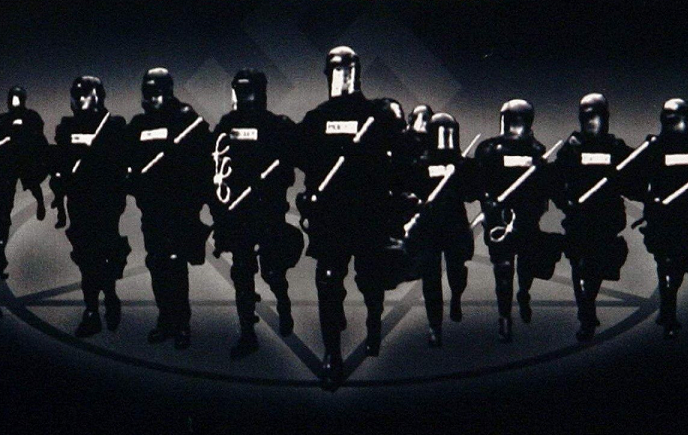 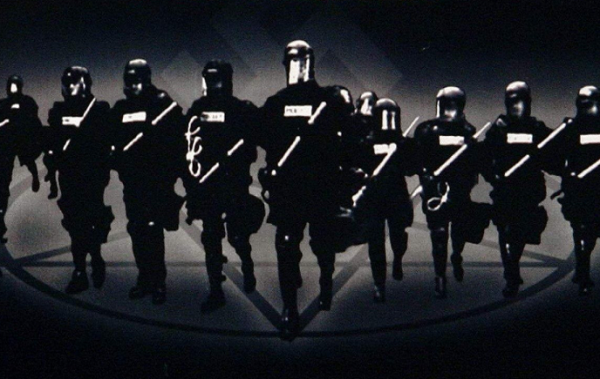 “Do exactly what I say, and we’ll get along fine. Do not question me or talk back in any way. You do not have the right to object to anything I may say or ask you to do, or ask for clarification if my demands are unclear or contradictory. You must obey me under all circumstances without hesitation, no matter how arbitrary, unreasonable, discriminatory, or blatantly racist my commands may be. Anything other than immediate perfect servile compliance will be labeled as resisting arrest, and expose you to the possibility of a violent reaction from me. That reaction could cause you severe injury or even death. And I will suffer no consequences. It’s your choice: Comply, or die.”— “‘Comply or Die’ policing must stop,” Daily KOS

Americans as young as 4 years old are being leg shackled, handcuffed, tasered and held at gun point for not being quiet, not being orderly and just being childlike—i.e., not being compliant enough.

Americans as old as 95 are being beaten, shot and killed for questioning an order, hesitating in the face of a directive, and mistaking a policeman crashing through their door for a criminal breaking into their home—i.e., not being submissive enough.

And Americans of every age and skin color are being taught the painful lesson that the only truly compliant, submissive and obedient citizen in a police state is a dead one.

It doesn’t matter where you live—big city or small town—it’s the same scenario being played out over and over again in which government agents, hyped up on their own authority and the power of their uniform, ride roughshod over the rights of the citizenry. In turn, Americans are being brainwashed into believing that anyone who wears a government uniform—soldier, police officer, prison guard—must be obeyed without question.

Franklin Graham, the heir to Billy Graham’s evangelical empire, offered up this “simple” piece of advice for “Blacks, Whites, Latinos, and everybody else” hoping to survive an encounter with the police:

Clearly, Graham’s message resonated with a core group of Americans: almost 200,000 individuals “liked” the message on Facebook, with an astounding 83,000 fans sharing his words of advice with their own friends, none of whom seem to recall that Jesus Christ, whom they claim to follow and model their lives after, not only stood up to the police state of his day but was put to death for it.

It’s not just mainstream evangelicals who have been brainwashed into believing that a good citizen is a compliant citizen and that obedience will save us from the police state. In the wake of a grand jury’s decision not to indict the police officer responsible for the choking death of Eric Garner, Patrick Lynch, president of the Patrolmen’s Benevolent Association, declared:

“If you don’t want to get shot, tased, pepper-sprayed, struck with a baton or thrown to the ground, just do what I tell you. Don’t argue with me, don’t call me names, don’t tell me that I can’t stop you, don’t say I’m a racist pig, don’t threaten that you’ll sue me and take away my badge. Don’t scream at me that you pay my salary, and don’t even think of aggressively walking towards me.”

In this way, the old police motto to “protect and serve” has become “comply or die.” As I point out in my book A Government of Wolves: The Emerging American Police State and in my forthcoming book Battlefield America: The War on the American People, this is the unfortunate, misguided, perverse message being beaten, shot, tasered and slammed into our collective consciousness, and it is regrettably starting to take root.

Despite the growing number of criminal charges (ranging from resisting arrest and interference to disorderly conduct, obstruction, and failure to obey a police order) that get trotted out anytime a citizen voices discontent with the government or challenges or even questions the authority of the powers that be, the problems we’re experiencing in terms of police shootings have little to do with rebellion or belligerence or resistance.

Rather, the problem arises when compliance doesn’t happen fast enough to suit the police.

For instance, 15-year-old Jamar Nicholson was shot in the back by police after they spotted him standing next to a friend holding a toy gun. “Officers ordered the boy to drop the weapon multiple times,” reports the Los Angeles Times. “When he didn’t comply, one of the officers opened fire.”

Martese Johnson, a 20-year-old college student, unarmed and in the process of walking away from a bar where he’d just been denied entry for being underage, was tackled by police and had his head slammed to the ground and bloodied, allegedly for being intoxicated, belligerent and using a fake ID. Johnson, who it turns out was polite, had a legal ID and was not drunk, survived the encounter after 10 stitches to his head.

Nicholson, Johnson and Lollie aren’t the only Americans being taught a hard lesson about compliance at the end of a government-issued gun.

World War II veteran John Wrana, 95 years old, dependent on a walker to get around, and a resident of an assisted living center, was rushed by five police officers—one with a Taser and riot shield, others with handguns and a 12-gauge Mossberg pump shotgun—after refusing treatment for a urinary tract infection and brandishing a shoehorn. One of the officers, allegedly fearing for his safety, fired multiple beanbag rounds at Wrana at close range, who bled to death from internal injuries.

James Howard Allen, 74 years old and recovering at home from a surgery, was shot and killed by police who were asked by family members to do a welfare check on him. When police crashed through the man’s back door, they found Allen, perhaps having just awoken and fearing a burglary, armed with a gun.

These shootings and deaths, and many more like them, constitute a drop in the proverbial bucket when it comes to police killing unarmed American citizens, and yet you’d be hard-pressed to find exact numbers for how many unarmed citizens are killed by police every year. Indeed, while police go to great lengths to document how many police are killed in the line of duty, police agencies aren’t actually required to report the number of times police officers engage in homicide. Suffice it to say, however, that the numbers are significantly underreported.

One website estimates that police kill on average three citizens a day in the United States. In 2014, 1100 individuals were killed by police in the U.S. That’s 70 times more than other first-world nations, and almost 20 times more than the number of U.S. troops killed in the same year in Afghanistan and Iraq.

Rarely are these officers given more than a slap on the wrist. More often than not, they operate with impunity, are shielded from justice by the governmental bureaucracy, and are granted qualified immunity by the courts.

A recent report by the Justice Department on police shootings in Philadelphia, which boasts the fourth largest police department in the country, found that half of the unarmed people shot by police over a seven-year span were “shot because the officer saw something (like a cellphone) or some action (like a person pulling at the waist of their pants) and misidentified it as a threat.”

Now it’s one thing for those who back the police—no matter what the circumstance—to insist that if you just obey a police officer, you’ll be safe. But what happens when compliance isn’t enough?

What happens if you play it safe, comply and do whatever a police officer tells you to do, don’t talk back, don’t threaten, and don’t walk away—in other words, don’t do anything that even hints at resistance—and still, you find yourself staring down the wrong end of a government agent’s gun? After all, the news is riddled with reports of individuals who didn’t resist when confronted by police and still got tasered, tackled or shot simply because they looked at police in a threatening manner or moved in a way that made an officer “fear” for his safety.

For instance, Levar Jones, pulled over for not wearing a seatbelt, was shot after complying with a police officer’s order to retrieve his license. The trooper justified his shooting of the unarmed man by insisting that Jones reached for his license “aggressively.”

What more could Jones or anyone have done to protect himself in that situation? How does a citizen protect himself against a police officer’s tendency to shoot first and ask questions later, oftentimes based only on their highly subjective “feeling” of being threatened?

The short answer is you can’t.

The assurance of safety in exchange for compliance is a false, misguided doctrine that has us headed towards a totalitarian regime the likes of which the world has seen before.

Rest assured, if we just cower before government agents and meekly obey, we’ll find ourselves repeating history. However, history also shows us a different path, one that involves standing up and speaking truth to power. Jesus Christ walked that road. So did Mahatma Gandhi, Martin Luther King Jr., and countless other freedom fighters whose actions changed the course of history.

The long answer, therefore, is that we must adopt a different mindset and follow a different path if we are to alter the outcome of these interactions with police.

No matter what path you follow, it will be fraught with peril. America is in the midst of a nervous breakdown, brought about by prolonged exposure to the American police state, and there are few places that are safe anymore.

A good test is this: if you live in a community that has welcomed the trappings of the police state with open arms (surveillance cameras, forced DNA extractions, Stingray devices, red light cameras, private prisons, etc.), all the while allowing its police forces to militarize, weaponize and operate beyond the reach of the Constitution, then you don’t live in a democratic republic—you live in a microcosm of the American police state.

If you have no real say in how your local law enforcement operates, if the only oversight of police actions is carried out by fellow officers, if any attempt to criticize the police is edited out or not covered by your local newspaper or TV station, drowned out by your fellow citizens, or intimidated into silence by your local police, then you have no recourse when it comes to police abuses.

Finally, if, despite having done nothing wrong, you feel nervous during a police encounter, you fear doing or saying the wrong thing in front of an officer will get you shot, and your local police dress and act like extensions of the military and treat you like a suspect, then it’s safe to say that you are not the one holding the upper hand in the master-servant relationship anymore.

This is the death rattle of the American dream, which was built on the idea that no one is above the law, that our rights are inalienable and cannot be taken away, and that our government and its appointed agents exist to serve us.