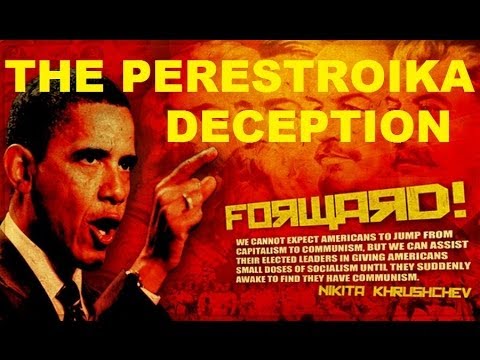 Golitsyn is generally considered to be among the first and most revealing on the subject of the secret Russian plans to attack. Having authored the The Perestroika Deception in which Golitsyn wrote about the deceitful intent behind the Leninist strategy which the present-day Communists are actively pursuing as they fake American style democratization efforts in Russia. According to Golitsyn, the short-term strategic objective of the Russians is to achieve a technological convergence with the West solely on Russian terms and mostly through a series of one-sided disarmament agreements.

According to Golitsyn, after the United States military is eliminated as a strategic threat to Russia, the long-range strategic Russian plan is to pursue Lenin’s goal of replacing nation states with collectivist model of  regional governments as a stepping stone to global governance. In order to achieve their final goal, Golitsyn states that Russia, after lulling America to sleep, will join with China in order to attack the United States from both the outside and inside as he detailed that “In each of these the scissors strategy will play its part; probably, as the final stroke, the scissors blades will close. The element of apparent duality in Soviet and Chinese policies will disappear. The hitherto concealed coordination between them will become visible and predominant. The Soviets and the Chinese will be officially reconciled. Thus the scissors strategy will develop logically into the ‘strategy of one clenched fist’ to provide the foundation and driving force of a world communist federation…before long, the communist strategists might be persuaded that the balance had swung irreversibly in their favor. In that event they might well decide on a Sino-Soviet ‘reconciliation.’ The scissors strategy would give way to the strategy of “one clenched fist.” The enemies now are gathered from within. At that point the shift in the political and military balance will be plain for all to see.  I submit that the free trade agreements and the 300 senior command military officers fired by Obama stand as proof of these strategies.

This is the only tip of the iceberg. There will be more to come  on this topic.