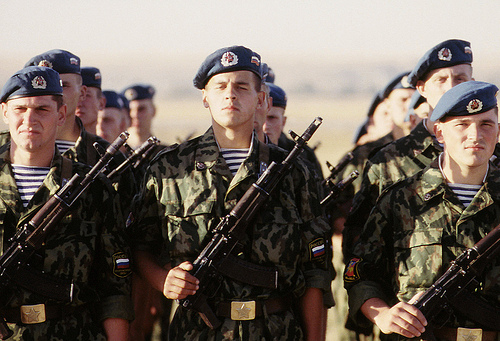 I spoke with my best source and he has information that the Russians training at Ft. Carson, CO, will a part of the Jade Helm 15 drill.  This is in line with the Russians being allowed to train for the highly sensitive Grid Ex II drills in November of 2013. Further, this is also consistent with the omnipresent treason of letting the Russians train in the highly secure war games drill known as RIMPAC.

In a previous article, I identified the fact that under FM 3-39.4, the Army Internment and Resettlement document, the document declares that foreign troops, presumably Russian, will be running the camps.

Let’s cut right to the chase. Jade Helm 15 is about the subjugation of the American people, particularly dissidents, and they are going to use Russian troops in support of this activity. This is why the American-based Russian media is attacking American journalists who dare expose these connections.