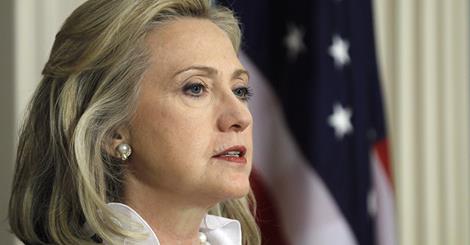 Congressman Trey Gowdy (R-SC) who is leading the investigation into the Benghazi fiasco has confirmed to America that Hillary Clinton is indeed a slimy and likely criminal malcontent. It seems that Mrs. Clinton no longer has any of the emails she sent or received during her time as Secretary of State, but don’t worry, unlike the folks at the IRS, her computer didn’t crash…

No, Hillary lost her emails the good ol’ fashioned way. She DELETED them.

And she did this AFTER the State Department asked her to return all of her work documents, emails and other material.

The lady is dirty.

Select Committee on Benghazi Chairman Trey Gowdy today issued the following statement regarding former Secretary of State Hillary Clinton’s response to the committee’s subpoena. She failed to produce a single new document and refused to relinquish her server to a neutral, detached third party for an independent review of potential public records:

“After seeking and receiving a two week extension from the Committee, Secretary Clinton failed to provide a single new document to the subpoena issued by the Committee and refused to provide her private server to the Inspector General for the State Department or any other independent arbiter for analysis.

“We learned today, from her attorney, Secretary Clinton unilaterally decided to wipe her server clean and permanently delete all emails from her personal server. While it is not clear precisely when Secretary Clinton decided to permanently delete all emails from her server, it appears she made the decision after October 28, 2014, when the Department of State for the first time asked the Secretary to return her public record to the Department.

“Not only was the Secretary the sole arbiter of what was a public record, she also summarily decided to delete all emails from her server ensuring no one could check behind her analysis in the public interest.”

“In light of the Secretary’s unprecedented email arrangement with herself and her decision nearly two years after she left office to permanently delete all emails and because the equities at stake involve not only those of the Select Committee and Congress more broadly, but also those of the American people and their right to the full record of her tenure as secretary of State, we will work with the leadership of the House of Representatives as the Committee considers next steps. But it is clear Congress will need to speak with the former Secretary about her email arrangement and the decision to permanently delete those emails.”