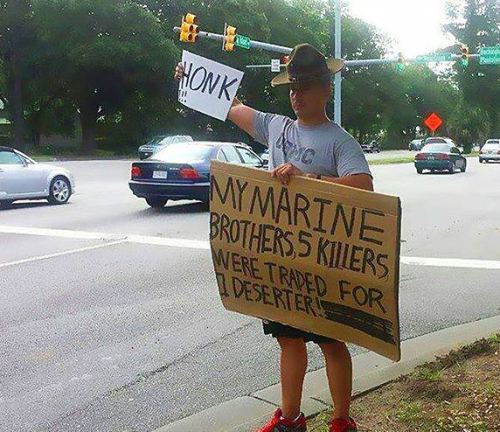 A United States Marine did something that the phalanxes of America’s military officers are too timid to do.

This is the sign he held up before passing motorists about what his supposed commander in chief did (source):

Sgt. Bowe Bergdahl deserted his post in Afghanistan and was held captive by the Taliban from June 2009 until May 31, 2014 when the Obama administration negotiated his release as part of a prisoner exchange for five high-level Taliban members who were being held at the detention center at Guantanamo Bay.

On June 25, 2014, the U.S. Army stated that there is “no evidence” that Bergdahl had “engaged in any misconduct” during his years in captivity.

Nine months later, on March 25, 2015, the Army announced that Bergdahl had been charged with two counts under the Uniform Code of Military Justice: one count of “desertion with intent to shirk important or hazardous duty” and one count of “misbehavior before the enemy by endangering the safety of a command, unit or place.”

Here’s a reminder of what Obama gave up and what America sacrificed in exchange for this deserter.

Staff Sergeant Clayton Bowen, 29, of San Antonio, Texas, andPrivate 1st Class Morris Walker, 23, of Chapel Hill, N.C., were killed by a roadside bomb in Paktika province on Aug. 18, 2009, while trying to find Bergdahl. Like Bergdahl, they were part of the 4th BCT from Fort Richardson, Alaska.

Staff Sergeant Kurt Curtiss, 27, of Murray, Utah, died Aug. 26 in Paktika Province, Afghanistan, of wounds suffered when he was shot while his unit was supporting Afghan security forces during an enemy attack. Like Bergdahl, Bowen and Walker, he was part of the 4th BCT.

2nd Lieutenant Darryn Andrews, 34, of Dallas, Texas, died Sept. 4 in Paktika Province when enemy forces attacked his vehicle with an improvised explosive device and a rocket-propelled grenade. Like Bergdahl, Bowen, Walker and Curtiss, Andrews was part of the 4th BCT.

Staff Sergeant Michael Murphrey, 25, of Snyder, Texas, died Sept. 6 in Paktika province after being wounded by an IED. Like Bergdahl, Bowen, Walker, Curtiss and Andrews, Murphrey was part of the 4th BCT.

Note: According to The Daily Beast, seven U.S. soldiers were killed looking for Bowe the deserter.