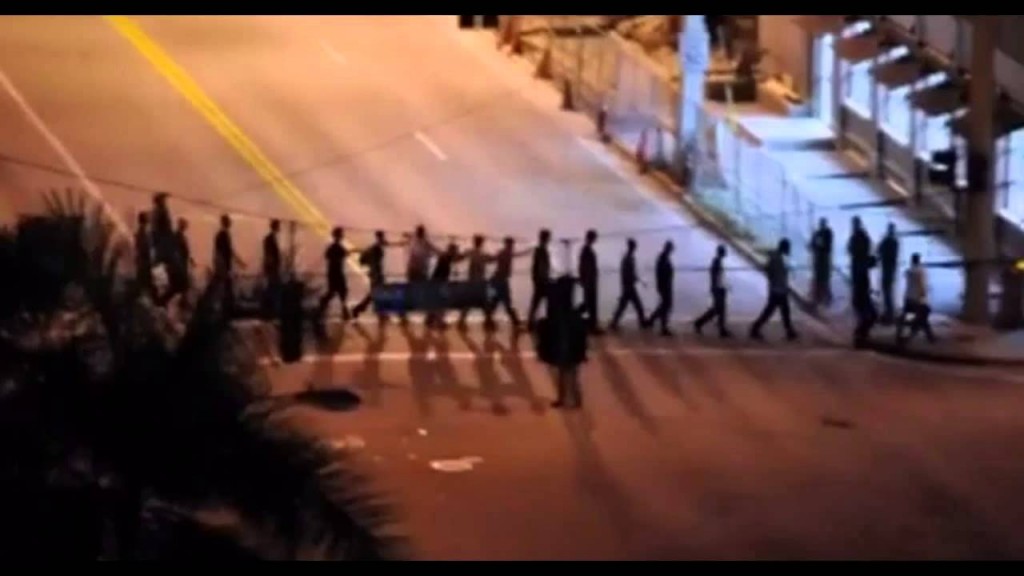 Is this roundup taking place in China, Iran or Russia? As many already know, this recently took place in Ft. Lauderdale, Florida in which “pretend” dissidents are rounded up as part of the Jade Helm 15 drill. Please note the straight line and the hands on the shoulders of those in front of them, as they were swept away to waiting white vans. We are witnessing the implementation of the Fourth Reich. I think it is logical to assume that Jade Helm 15 will go live and it is a martial law extraction of dissidents exercise to be followed by full scale martial law. I have received many inquiries about when I believe martial law will be declared. Despite all the documentation and anecdotal evidence, on my own, I am not able to precisely determine the time of the implementation of martial law on the streets of America.

Even though it is not possible to know the date, without the information leaking from the inside, I do believe that there are “the chest pains before the heart attack”, which will provide the clues necessary to determine when martial law will be imposed.

Your Pastor Will Know the Date of Martial Law Implementation

Many people in the independent media have reported that an estimated 28,000 pastors were recruited by FEMA/DHS, as part of the Clergy Response Team, and that their initial and primary training was to tell their flock to obey the DHS version of Romans 13. Romans 13, in the King James version of the Bible, begins:

“Let every soul be subject unto the higher powers. For there is no power but of God: the powers that be are ordained of God.” Romans 13:1

Many of us have been quick to point out that this bastardization of the Romans 13 is designed to force compliance to government edicts who might not otherwise comply. Certainly all governments are not established by God. Were the governments of Stalin, Hitler, Pol Pot, all ordained by God? What about George the III?

All of Pastor Mansfield’s revelations stem from legislation known as, The National Emergency Centers Act or HR 645 which mandates the establishment of “national emergency centers” to be located on military installations for the purpose of to providing “temporary housing, medical, and humanitarian assistance to individuals and families dislocated due to an emergency or major disaster,” according to the bill.

The legislation also states that the camps will be used to “provide centralized locations to improve the coordination of preparedness, response, and recovery efforts of government, private, and not-for-profit entities and faith-based organizations”. Hence, the birth of NOVAD and the Clergy Response Teams.

The bill also provides that the camps can be used to “meet other appropriate needs”, as determined by the Secretary of Homeland Security. This a carte blanche mandate that many fear could mean the forced detention of American citizens in the event of widespread rioting following a national emergency or a total economic collapse.

Pastor Mansfield attended several briefings and he could barely believe his ears. He learned of the government’s plan to enact martial law as well as to implement forced population relocations. Mansfield emphasized that when martial law is enacted, the enforcement would be immediate. In other words, family members will be separated from each other and part of the training that the clergy received was how to comfort separated family members. It doesn’t take much imagination to conclude that this  is what we are seeing from the horrifying images from Ft. Lauderdale and the Death Domes throughout Texas.

Pastor Mansfield told me that the pastors were trained by FEMA to go to homes were people refused to be relocated by the authorities and  their immediate job was to convince the reluctant to willingly go to the relocation camps. Ostensibly, this was to be done in lieu of sending in the SWAT teams.

I asked Mansfield if FEMA camps were real and he stated that much of the clergy training focused around this scenario of pastors operating within the forced relocation centers. The main goal of a pastor assigned was to bring order and encourage compliance with DHS requests, hence, the emphasis on Romans 13.

Disturbingly, Pastor Mansfield reiterated several times that the number one job of these pastors is to calm down the detainees and encourage their compliance within the people’s new surroundings.

Pastor Mansfield also stated that pastors will be utilized as informants. This violates the legal privilege of confidentiality between pastor and church-goer, that is currently recognized by law. All church-goers can no longer trust the sanctity of personal confessions and revelations made to pastors and priests. This one illegal act by DHS completely undermines the Christian Church in America!

DUE TO THE FACT THAT THE CLERGY RESPONSE TEAM WILL BE UTILIZED IN THE EXTRACTION PROCESS OF AMERICANS, TO FORCED INTERNMENT/RESETTLEMENT CAMPS, THESE “TEAM” MEMBERS REPRESENT THE BEST CLUE WE HAVE AS TO WHEN MARTIAL LAW WILL BE CARRIED OUT.

I strongly suspect that the Clergy Response Teams are a part of Jade Helm 15 and simply listed as DHS personnel. With a minimum of 28,000 pastors being a part of this dastardly plan, we need to all put our pastors under our watchful eye. Is your Pastor disappearing for unexplained periods of time? Network with people you know from other churches. Are your respective Pastors disappearing at the same time? Can you account for your Pastor’s travels? This past weekend, at Baylor University, Christians from all over the Southwest came together at Baylor’s football stadium for fellowship at an event referred to as the “Gathering“. Given the political climate in Texas, I am a little more than suspicious that this event did not bring together several Clergy Response Team members for additional training under NOVAD. Again, we need to putting our Pastors under scrutiny because we have 28,000 Judas’ in our midst.

Clergy Response Team Members Are Intimidated and Threatened by DHS

Mansfield told me that the pastors in America are being coerced to participate because when an emergency is declared, no pastor, who does not have the “FEMA-trained government badge” will be allowed to be in a declared “emergency” SAFE area.

Pastor Mansfield also felt very strongly this was the government’s way of removing Jesus from America’s landscape and set the stage for the ushering in of a new-age religion. In fact, Mansfield shared with me documentation which demonstrated DHS’ attempt to remove Jesus from the entire internment/resettlement process.

The pastors were told not to quote Scripture. The DHS document which was prepared for the pastors clearly stated that Scripture had been used to “oppress” people in the past and the presenters strongly discouraged the its use. Please see the following excerpt from one of the DHS training manuals:

Doesn’t this strike you as odd? DHS recruits Pastors but will not let them preach the Word of God? Can we think of anyone or anything else that might support this goal? Please allow me to provide another hint:

The artwork of Jade Helm 15 is bizarre and troubling. Please note the broken arrows. In military parlance, broken arrow means that a military unit’s perimeter has been overrun and defeat imminent. The meaning here is easy to extrapolate.

Originally, I was stumped by the phrase that accompanied the symbol for Jade Helm 15, “Master the Human Domain”. This is not a phrase that is in our American colloquialisms. On the surface, it appears to mean that this drill is about the enslavement of humanity? Certainly, the Obama administration would not be so bold, even if this was their intent, to so brazenly put this phrase as moniker for a major operation. Wouldn’t that alert the public that something evil was afoot? Or, has this plot gone so far that they do not care?

Upon closer examination, the fact that the term”Human Domain” is used, it makes me wonder what would the “Un-Human Domain” consist of? And certainly the word “Master” does strongly imply slavery. And who is unhuman enough to be interested in enslaving humanity? The only possible answer is the Prince of Darkness. There is no other way to interpret this moniker for Jade Helm 15.

Now we know who the real enemy is. We also know that this rapture in reverse (i.e. “disappearing Pastors”) are a warning sign of impending martial law, the question remains, what are we going to do about it?