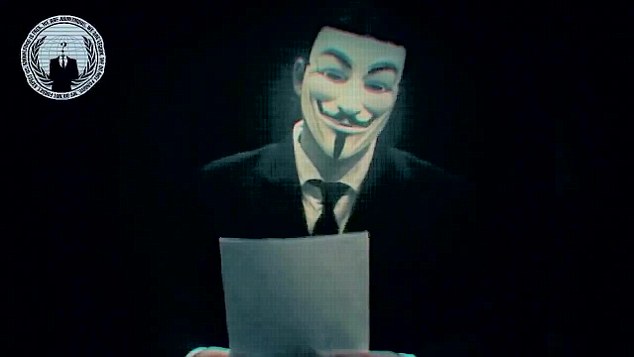 The alliance between Islam and the left leads to this: arrogant, self-righteous left-fascists working to deny the freedom of speech to the defenders of freedom, on behalf of the most oppressive and hateful ideology the world has ever known.

“Anonymous threatens Israel with ‘electronic Holocaust’ in response ‘to crimes in the Palestinian territories,’” by John Hall, MailOnline, March 30, 2015

The cyber activist group Anonymous has issued a chilling video statement threatening Israel with an ‘electronic Holocaust’ in response to what it calls ‘crimes in the Palestinian territories’.

The clip is edited in the style of a television news report and features a masked and suited individual sitting behind a desk and reading from a pre-prepared script as he declares plans for a massive cyber attack on April 7 – one week before Holocaust Remembrance Day.

Declaring Palestinians youths a ‘symbol of freedom’, Anonymous says it will take down ‘servers, government websites, Israeli military websites, and Israeli institutions’ in a move that will ‘erase [Israel] from cyberspace in our electronic Holocaust’.

The video is narrated in an electronic voice, suggesting software has either been used either to conceal the identity of the person speaking, to translate it from another language into English, or possibly both.

‘We are coming back to punish you again, for your crimes in the Palestinian territories, as we do every year on 7 April, All we see is continuous aggression, bombing, killing and kidnapping of the Palestinian people, as in the last war against Gaza in 2014,’ the voice in the video says.

‘Our message to the foolish Benjamin Netanyahu and all leaders in the Zionist entities, we will continue to electronically attack until the people of Palestine are free,’ it adds.

‘A message to the youth of Palestine, you are a symbol of freedom, resistance and hope: we are with you and will continue to defend you,’ the voice goes on to say.

The video is subtitled in Arabic and the description posted on the YouTube page suggests it has been uploaded by a group calling themselves ‘Anonymous Arab’. They also post a link to a Facebook page of a group by the same name.

The footage includes numerous clips of Netanyahu sitting at a desk surrounded by advisers, as well as still images from the Gaza conflict, including air strikes.

Most of the images – which include shots of injured children and their grief stricken parents – were filmed during fighting the region last year.

Previous targets of the hacker group’s operations have been websites of the Israeli prime minister’s office, the IDF, the Bank of Israel and the Embassy of Israel to the United States.

Speaking to Newsweek, Benjamin T. Decker, a senior intelligence analyst at Tel Aviv-based risk consultancy The Levantine Group, said it is not the first time Anonymous has issued such a threat – adding that it happens every year, with Israel able to limit the impact further each time.

‘For the most part, this is posturing. This is actually the fourth year that Anonymous has carried out this Op Israel attack and called on their supporters to erase Israel from the internet,’ he said.

‘As the years have progressed we have seen that, despite their increasing sophistication in hacking techniques, we have seen less damage against Israeli cyber infrastructures, largely due to Israel’s pioneering of most cyber warfare tactics, both offensive and defensive,’ Mr Decker added.

The video threatens Israel with an ‘electronic Holocaust’ on April 7 – just one week before Holocaust Remembrance Day, known in Israel as Yom HaShoah.

The event is observed as Israel’s day of commemoration for the approximately six million Jews who perished in the Holocaust as a result of the actions carried out by Nazi Germany.

News of Anonymous threat comes as a Jerusalem district court indicted a Palestinian from east Jerusalem on charges of traveling to Syria to join the Islamic State terrorist group.

The Shin Bet security service says Khalil Khalil, born in 1990, had joined a gym at the Hebrew University in Jerusalem to physically prepare for the mission.

The agency says he told his family he was going on a religious pilgrimage to Mecca, but instead, he and a friend flew to Istanbul in January and then traveled to a safe house in southern Turkey. From there, smugglers brought them to Syria.

Khalil returned after a few weeks and was later arrested by the Shin Bet….