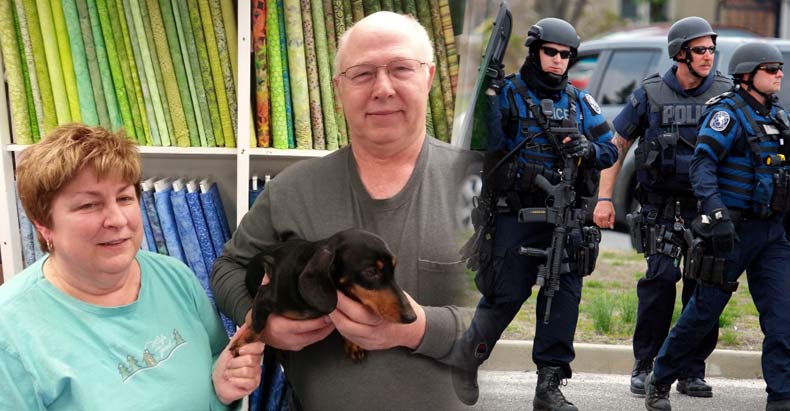 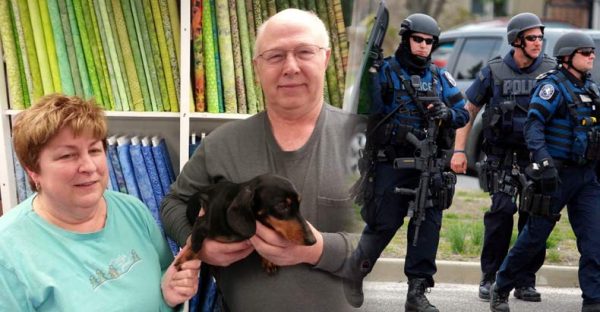 Owego, NY– Steven and Cindy Dunlap of Owego, NY, were expecting a normal evening as Steven Dunlap left his home for his weekly pizza night with his friends on February 11. Unfortunately, their normal evening became a nightmare when the police decided that the traffic at their home from the elderly woman’s quilting business was indicative of a meth lab.

Cindy Dunlap says she no longer feels safe in her own home. She believes her reputation has been tarnished since the day her husband was pulled out of his car and arrested at gunpoint by six officers last month.  As Steven was taken into custody he repeatedly asked why he was being arrested; the officers would not provide any answers.

Worried after their friend never arrived, Steven’s friends eventually called Cindy to ask if Steven would be leaving to join them soon.

Horrified that he may have been in an accident, Cindy bolted from her house in a panic to retrace his route. She searched for signs that he might have crashed to see if he had run off of the road.

She was subsequently stopped by officers. Her heart sank as she imagined that they were about to notify her that the worst had happened to her husband.

Cindy was taken into custody and informed that they had a warrant to search her home.  As she watched the officers prepare a battering ram she pleaded with the officers to just open the unlocked door.  They asked to her to confirm that she was giving permission to enter. When she gave permission, they informed her that they would have used the battering ram had she not.

The use of the battering ram would have been completely unnecessary destruction even if the home had been locked, as the officers also had Steven’s keys in their possession.

Search warrants signed by Broome County and Tioga County judges less than 24 hours before the raid indicated investigators were looking for methamphetamine, crack cocaine and firearms, among other things, WNBF reported.

The house had been under surveillance the day of the search, and an officer had noted to Cindy that there had been a lot of visitors.  When she asked him if he had noticed that they were all harmless looking “old ladies,” the officer told her that they couldn’t see the people as they could not find a parking spot close enough.

When the search turned up only quilting supplies from her business of over 20 years and her small dachshund dog, the police left and freed Steven, allowing him to drive himself home.

No apologies were offered despite their obvious and monumental mistake.

“If something goes wrong, who do you call?” she asked.

Luckily for the Dunlap’s, no one was killed or maimed by the negligent actions multiple departments involved in this nonsensical police action. Just who were the police protecting during this raid?