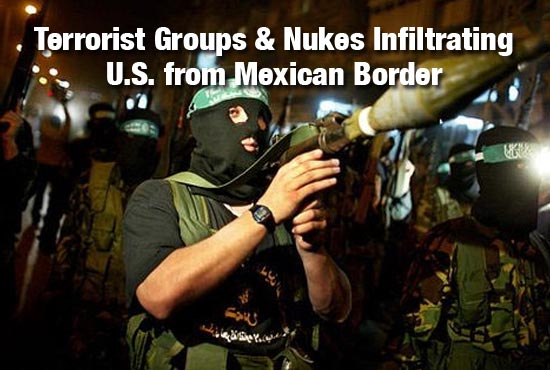 Exercise wargames thousands of people flooding into America during crisis

A Department of Homeland Security funded drill which took place yesterday in New Mexico simulated a nuclear attack on the US-Mexico border and how authorities would deal with thousands of people crossing over from Mexico to escape the catastrophe.

The exercise simulated, “an emergency involving the detonation of a weapon of mass destruction near the U.S./Mexico border that causes a mass migration of about 3,000 people,” reported KFOX 14.

The drill, which involved numerous police and fire departments as well as the American Red Cross and the Salvation Army, included an exercise where thousands of people were in need of decontamination and oxygen.

The news station featured an interview with a resident who said he would be happy to participate in a drill where police went door to door to evacuate people under a simulated emergency.

“Maybe have some [mock] evacuations. Have them come to the houses, knock on doors and have us go out someplace,” said Gill Cadena.

The sheriff’s office said that the Santa Teresa High School would be used as a temporary facility to house victims under such an emergency.

The scenario of thousands of people streaming across the border from Mexico in the context of a national emergency has been a persistent concern for the DHS.

In 2011, the federal agency directed ICE to prepare for a mass influx of immigrants into the United States, calling for the plan to deal with the “shelter” and “processing” of large numbers of people.

“DHS Secretary Janet Napolitano, according to a statement by Immigration and Customs Enforcement, recently directed ICE to develop a national-level mass migration plan, ” reported GSN. “The plan will outline how to address the health care, sheltering, processing, transition and disposition of large numbers of undocumented individuals who might arrive in the U.S. as the result of a mass migration.”

Part of the preparations for sheltering and processing an influx of people includes the construction and manning of detention camps.

In 2006, Halliburton subsidiary Kellogg, Brown and Root was contracted by Homeland Security to build detention centers designed to deal with “an emergency influx of immigrants into the U.S,” or the rapid development of unspecified “new programs” that would require large numbers of people to be interned.

In December 2011 it was revealed that KBR was seeking sub-contractors to staff and outfit “emergency environment” camps located in five regions of the United States.