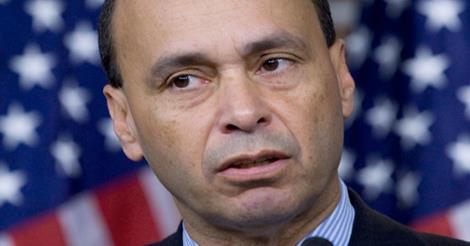 I’m the first to admit that I’m a bit slow. My conservative and liberal friends both tend to make fun of me for being naïve or idealistic. I’m not “pragmatic” enough for some conservatives, and I’m too trusting for others, but I truly believe the things I say I believe. One of those naïve beliefs usually has to do with liberals… I happen to think that many liberals really do love our country and only want what is best for our people. They just have the worst ideas on how to accomplish what is best. One example of that is Democrat Rep. Luis Gutierrez of Illinois.

Rep. Gutierrez has become the leader of the amnesty faction in Congress. In fact, Gutierrez has become so pro-illegal that he is now publishing books to teach people how to break our laws! This is an example of where a liberal who wants to do “good” has lost sight of what is “good” and has settled in on success by “any means necessary.” Sadly, the truth of the matter is that the “ends” don’t always “justify the means.” Rep. Gutierrez has gone too far in his support of illegal immigrants and has begun to openly tutor them on the best means of flouting our laws and escaping prosecution.

The Democrat Representative has produced what he is calling a “toolkit” to help illegals avoid deportation. He has also put together a short video explaining to illegals how his toolkit works. In his video he implies that by following his advice, illegals can somehow avoid the long arm of the law and skip out on the just prosecution they deserve for their crime. However, while Gutierrez’s advice may work, illegals should keep in mind that his plan is not foolproof and that law enforcement may still deport illegal criminals for their crimes. While immigration officials may be overtaxed, that does not mean they’ll simply give every illegal criminal a free pass to stay in our country illegally.

“Only pull [the card] out when you’re detained by an immigration official; it explains in English and Spanish that you’re eligible for DACA and DAPA. By using this card after you’ve been arrested or detained, you can explain that [according to] the policy in place today, you should be released because you’re not a priority for deportation…

I hope that you never have to use this card, but if you do, don’t be scared, because you’re prepared. Soon enough the DACA and DAPA applications will be available.”

I believe that Rep. Gutierrez means well for our country, but I’ve been wrong before and I’ll probably be wrong again. Rep. Gutierrez, if you love our nation, as I hope you do… please stop this insane defense of crime and of citizens of another nation, and please remember that you are supposed to be upholding the law and representing the citizens of your district. Do they want you teaching people how to break the law? I think not.