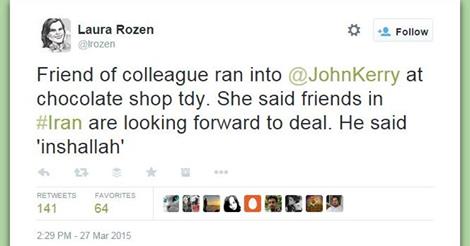 When asked about an Iran deal, Secretary of State John Kerry, says: “Inshallah” (Translated as “If Allah wills it”) in Arabic.

Examiner: It’s not every day that the United States Secretary of State invokes the Islamic deity, but as reported, that’s just what John Kerry did. As reported by the Western Journalism news portal on March 30, 2015, Secretary Kerry gave the one word response in Arabic when asked the chances are for a deal with Iran.

As sent via her micro-blogging site on Twitter, Voice of America reporter Negar Mortazavi cited that when John Kerry was asked on the fly in the streets of Lausanne, Switzerland what the chances were of an agreement being reached in regard to the talks between a number of world powers and Iran, Kerry responded with a simple “Inshallah,” which is Arabic for “If Allah wills it.” Secretary Kerry has taken fire from American conservatives for what they perceive as Kerry being more than willing to broker a weak deal with Tehran.

Concerns were heightened among conservatives when Secretary Kerry recently hailed progress with the Tehran government, despite Iran’s Supreme Leader Ayatollah Ali Khamenei telling a cheering crowd Tehran that Iran would never give in to any of the Western demands. When the crowd started shouting, “Death to America,” the Ayatollah responded: “Of course yes, death to America, because America is the original source of this pressure” as reported by the Times of Israel on March 21, 2015.

What raised both Republican and Democrat eyebrows was the White House response to Khamenei’s call for the destruction of the United States. As CNN reported (via The Weekly Standard), the White House just sees the “Death to America” talk as “intended for a domestic political audience.”