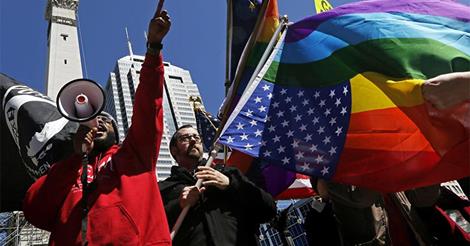 All the hoopla over Indiana’s Religious Freedom Restoration Act has done at least one thing: exposed the totalitarian, intolerant motives of the sodomite community its supporters.

Starnes went on to say that Hollywood, the liberal media and other activists would have American’s believe that this piece of legislation is all about legalizing discrimination against people who engage in sodomy and other assorted behaviors, something that is actually legal already. After all, we discriminate all the time. If you are unaware, that is one of the enumerated rights found in the First Amendment. It’s part of the “right of the people peaceably to assemble,” which by implication people have the liberty to assemble with certain people and not to assemble with others.

“The law ensures that Hoosiers have the ability to not only hold religious beliefs, but live by those beliefs,” Starnes said.

Indiana Governor Mike Pence stood his ground over the weekend, saying that the law would not change. Of course, Pence’s stand outraged the lawless activists in the sodomite community.

Pence has since started to backpeddle saying, “After much reflection and in consultation with leadership in the General Assembly, I’ve come to the conclusion that it would be helpful to move legislation this week that makes it clear that this law does not give businesses a right to deny services to anyone.”

Well, isn’t that rich? Then what was the purpose of the legislation Mr. Pence? What happened was this small amount of totalitarian, sodomite activists got to him and he caved.

“I’ve never supported that (speaking of businesses discriminating against people based on their sexual behavior),” Pence said. “It’s not on my agenda. But I think it’s a completely separate question. I mean, we are talking about the religious freedom restoration act, which is about restoring the highest level of scrutiny in our state courts in matters of government action that intrude upon the religious liberty of Hoosiers. That’s where I want to stay focused.”

And just so we’re clear, when Pence was asked if Christian businesses should be compelled to provide services to so-called sodomite “weddings,” he said, “I don’t support discrimination against anyone.”

He would later add, “No one should be harassed or mistreated because of who they are, who they love or what they believe.”

This is classic doublespeak on Pence’s part. Someone is always going to discriminate based on a variety of factors and judgments. Love is not the issue when it comes to sodomy either. Mike Pence is simply not one that believes people have a right to their property and their business to conduct it properly and render the fruits of their labor to those they see fit.

Starnes said that the reason the so-called “tolerant” sodomites were outraged is because “their true motives have been exposed.”

“They don’t want tolerance and diversity,” said Starnes. “They want compliance and acceptance and they want to silence and punish any persons who oppose their beliefs.”

According to Starnes, the Religious Freedom Restoration Act is the “stop gap.”

Starnes recounted that in 2010 an Indianapolis cookie shop was accused of discrimination due to the fact that the owners of the business, who were Christians, refused to produce rainbow cookies for “National Coming Out Day.” He also made mention of another bakery owned by Christians that closed its doors after refusing to bake a cake for a sodomy-based “wedding.”

In other words, these people that claim they are all about “tolerance,” “love,” “diversity” and “coexistence” are really all about totalitarianism and silencing those who dissent, especially those who hold to the Word of God, which exposes their depravity.

There are currently nineteen states in the union that have Religious Freedom laws on the books, not that they are actually needed, since that is specified in the First Amendment as something to be protected. Among those states are:

The reason for the additional laws on top of existing laws is that, according to Starnes, “It’s open season on people of faith.”

But let me go a step further. It’s open season people of the Christian faith. I don’t hear about sodomites trying to take down Muslim, Hindu, Buddhist or the like bakeries, photographers or t-shirt makers, do you? Nope, they are out to silence the people who remind them of their rebellion against their Creator.

These Christian business owners, along with many pastors are facing the loss of their business, fines, possible imprisonment and other attacks simply because they want to conduct their business according to conscience.

One thing that does need to be addressed here though is the idea that with blanket legislation that protects all religions, comes protection for the open practice of Islam, Satanism, Hinduism, Buddhism and any other form of religion that is opposed to the One, True God. Keep that in mind Christians, for this is a two-edged sword and God is clear regarding the worship of Himself.

You shall not have any gods before Me.

Since America’s heritage is Christian and there is absolutely no argument about that, isn’t it time our government started to once again hold to Christian principles and laws in its governing and be explicitly Christian in that aspect? Isn’t it time that our government start acting as God’s minister in the area of law and justice as they are required to do (Rom. 13:1-5) and begin dealing with the actual evildoers rather than oppressing those who do good?

Not only has this piece of legislation exposed the sodomite community for who and what it is, I think it has once again shown us the kind of spineless men, who will not stand their ground like Governor Pence. Shame on both!