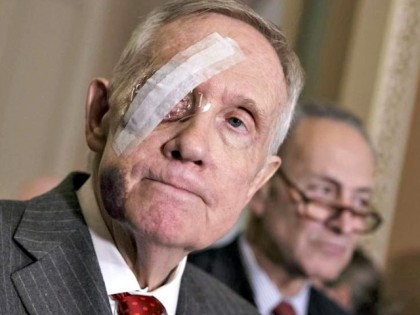 Many remember Harry Reid‘s “so called” major accident with exercise equipment on 01/01/2015 at his home in Nevada which sent him to the hospital with substantial injuries to his eye, face, and ribs. The official story is Reid was using a rubber exercise band, which snapped, hitting him hard and causing him to fall into cabinets before hitting the floor.

I happened to be one of the first to question Reid’s accident in early March, citing that his injuries were not consistent with this type of equipment failure and that he appeared to have been beaten up.

Another suspicious indication of Reid getting beaten, rather than having a simple accident is his announcement of retirement recently. Before his injuries, he made no hint that he may retire.

If you look at the physical shape Reid is in, one would question whether he even owns any exercise equipment, much less have an accident with such implements. Reid may have been an athlete in his younger years, but serving in the Senate, I doubt he has even preformed a dozen pushups since assuming office in 1987.

Harry Reid’s connection with the mob goes back as far as the 1970’s, and an alleged meeting with the Mafia in January 2015 in Las Vegas seems to indicate Reid did not come through with certain promises made to them.

Perhaps even more interesting than Reid’s injuries is the fact that Reid’s dirty dealings seem to involve several high level people in the government such as Robert Menendez, who is currently being indicted on corruption charges.

Harry Reid’s simple accident with exercise equipment seems to involve a massive corruption scandal involving many politicians and the Mafia.

With the indictment of Sen. Menendez, we may be witnessing the biggest corruption scandal since Watergate.