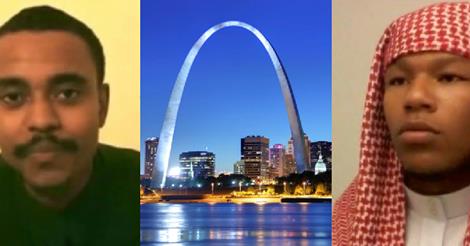 The New Black Panthers have been allowed to skirt the law after intimidating voters, openly calling for the murder of police officers and inciting riots. Now two members of the group stand accused of planning to bomb a building, a vehicle and various other properties as well as use guns in an unlawful manner.

Brandon Orlando Baldwin and Olajuwon Ali Davis, both 22 years old, and members of the New Black Panthers are alleged to have planned to sneak a bomb past security at the Gateway Arch and plant it inside at the top of the historic construction.

According to KMOV, the two “were indicted on charges involving the conspiracy to maliciously damage and destroy a building, vehicle and other property with explosives and the illegal purchase of firearms from a Cabela’s store.”

“The arrests last November of these two defendants, who are members of the St. Louis Chapter of the New Black Panther Party, prevented their alleged plot to carry out violent acts during the protests in Ferguson,” said William Woods, a special agent in charge at the FBI St. Louis Division.

David then is alleged to have put down a deposit on a pipe bomb on November 18. Interestingly enough, though they could only come up with enough money for three explosives if they used one of the men’s girlfriend’s Electronic Benefit Transfer cards. Talk about your welfare jihad! These guys are following the very dictates of Islamic clerics!

Baldwin also purchased two .45 caliber pistols at Cabela’s, which were intended for someone else. It makes you wonder about those background checks, doesn’t it?

The Daily Caller reports that Davis seems to have been the leader between the two:

Federal prosecutors believe Davis — the one who goes by the name Ali — was the leader of the two cash-strapped bombers.

Davis was a featured speaker at an October New Black Panther rally at Greater St. Mark Family Church in Ferguson. The rally concerned the shooting of Brown.

At the rally, Davis was characterized as the Missouri New Black Panther party’s “minister of law.”

“This is not the first Mike Brown, and it won’t be the last, if we do not unite,” Davis said, according to the Post-Dispatch. “Divided, we lose brothers and sisters. If you do not unite, put aside your difference and unite, you can expect no changes in the future. We must change our minds, our systems and ourselves.”

The two men face up to twenty years in prison and $250,000 in fines. Of course, we’re all aware that the federal government will attempt to meddle in the matter which takes place in the State of Missouri, something they are not authorized to do in the Constitution. My guess is that Attorney General Eric Holder will probably take a lead from State Department spokesperson Marie Harf and do everything in his power to make it look like all these domestic jihadists need is a job.