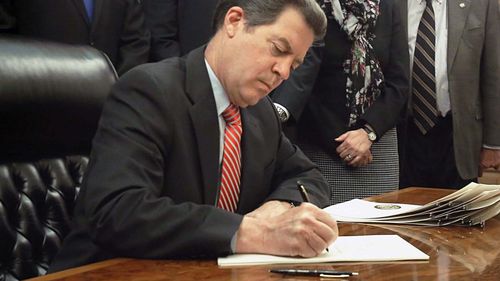 It’s nice to see Americans learning about their freedoms and seeing representatives moving along with those freedoms. Such is the case with Kansas, whose governor, Sam Brownback (R), signed Senate Bill 45 which recognizes citizens’ rights to carry their weapons concealed in the state without a permit from the state or training required from the state.

Now, understand that all that should happen is for governments to simply recognize that citizens’ already have these rights. There is no need for further legislation.

“Responsible gun ownership – for protection and sport – is a right inherent in our Constitution. It is a right that Kansans hold dear and have repeatedly and overwhelmingly reaffirmed a commitment to protecting,” Brownback said. “I will continue to fight for and protect the Second Amendment rights of all Kansans.”

Sadly, this does not do away with a concealed carry permit process as Brownback pointed out that this applies only to the State of Kansas.

So while it is good that he is willing to recognize his citizens’ rights regarding the matter, he also points out that governors from other states do not recognize those rights.

Kansas is now the fifth state with such a concealed carry law. The other states are Alaska, Arizona, Vermont and Wyoming. Currently, there are nine other state legislatures looking at similar bills, and Montana and Arkansas have concealed carry without a permit, but only in certain parts of the state. Incidentally, both states recently passed bills to block federal gun control after Obama made threats to usurp the Constitution by means of unconstitutional executive orders.

While some said that this would be a problem and make communities less safe, the issue is one of responsibility. Those who purchase a gun and are reckless or lawless with it will have to pay the price for such behavior. However, responsible gun owners will seek to train with their gun so that they can safely and effectively use it should the need arise.

To that end, Governor Brownback encouraged anyone who owns a gun to take advantage of existing safety training courses, whether for hunter safety or general gun safety.

In 2013, Kansas sought to nullify all federal gun laws via the Second Amendment Preservation Act.

Currently, there is a constitutional concealed carry reciprocity act that would allow to carry concealed across state lines, but again, it would require a permit, something the Constitution knows nothing of. Understand that if one has to obtain a permit via the state in order to exercise an inalienable right, then it is no longer considered a right, but a privilege.

At least the Kansas bill seems to be headed back towards that form of liberty in the state concerning arms. For that Kansas should be thankful.