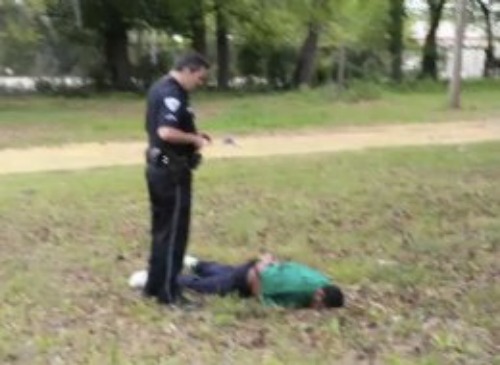 A South Carolina police officer who shot and killed an unarmed man has been arrested and charged with murder.

The officer, Michael T. Slager, 33, claimed he feared for his life because the man, Walter L. Scott, 50, took his stun gun in an altercation during a traffic stop on Saturday.

Moments after the struggle, Officer Slager reported on his radio, “Shots fired and the subject is down. He took my Taser,” according to police reports.

But video evidence provided by a bystander appears to tell a different story:

The video begins in the vacant lot, apparently moments after Officer Slager fired his Taser. Wires, which carry the electrical current from the stun gun, appear to be extending from Mr. Scott’s body as the two men tussle and Mr. Scott turns to run.

Something — it is not clear whether it is the stun gun — is either tossed or knocked to the ground behind the two men and Officer Slager draws his gun, the video shows. When the officer fires, Mr. Scott appears to be 15 to 20 feet away and fleeing. He falls after the last of eight shots.

The officer then runs back toward where the initial scuffle occurred and picks something off the ground. Moments later, he drops an object near Mr. Scott’s body, the video shows.

Police reports say that officers performed CPR and provided first aid to Scott, but the video does not corroborate that claim. It shows that for several minutes after the shooting, Scott remained face down with his hands cuffed behind his back. A second officer arrives, puts on blue medical gloves and attends to Scott, but is not shown performing CPR. A third officer later arrives, apparently with a medical kit, but also is not seen performing CPR.

“I can tell you that as a result of that video and the bad decision made by our officer he will be charged with murder and that’s not something that we like to hear.

It goes to say how we work as a community. If you’re wrong, you’re wrong and if you make a bad decision don’t matter if you’re behind the shield… you have to live by that decision.”

The South Carolina Law Enforcement Division, the F.B.I., and the Justice Department are all investigating the shooting.

A murder conviction in the state could lead to the death penalty or up to 30 years to life in prison, according to the South Carolina Law Enforcement Division.

The case is generating a lot of discussion on Twitter:

Our government is in outright denial on one end; weak lip service with some initiatives on the other. We need a real reckoning #walterscott

If this video didn't surface the killer of #walterscott would never have been charged because cops lie http://t.co/GPXH48S6rY

Cop lied on that report something serious & put a weapon by #WalterScott body. Explanation? 'Feared for my life.' Sound familiar? #everyday

The worst part about the #WalterScott case is that it's likely only Slager that will go to jail. That other cop WATCHED the weapon plant.

if you run away from the public servant
who is charged to protect & serve you,
you will be executed.
like #WalterScott

"@Bipartisanism: We're all one bullet away from being a hashtag.
RIP #WalterScott. You will not die in vain. pic.twitter.com/TTojj6gLGb"

A white police officer who shot a 68-year-old black man to death last year following a chase faces a felony gun charge, in addition to his indictment of misconduct in office.

North Augusta officer Justin Craven was charged Tuesday with discharging a gun into an occupied vehicle in the February 2014 death of Ernest Satterwhite, the State Law Enforcement Division said in a release.