It is clear that the economic realities falling upon the masses in America are driving us towards a crisis point.

Even with substantial government subsidies, the bottom 10% of Americans are beyond struggling, spending more than 60% of their meager incomes on the bare essentials. According to the latest official numbers, the poorest in the United States are spending 42% of their income on housing and another 17% on food, statistics that are unsustainable for individuals and families.

For many Americans, the rise in food and housing prices is a tough squeeze. That’s because—even in an era with low overall inflation—low-income Americans spend a disproportionate share of their money on food and housing.

New data from the Labor Department show the extent of the discrepancy. The bottom 10% of Americans, by income, devote 42% of their spending to housing and an additional 17% to food–nearly 60% of their total spending, according to the Consumer Expenditures Survey. By contrast, the wealthiest 10% of Americans dedicate only 31% of their spending to housing and 11% to food–closer to 40% of total spending. 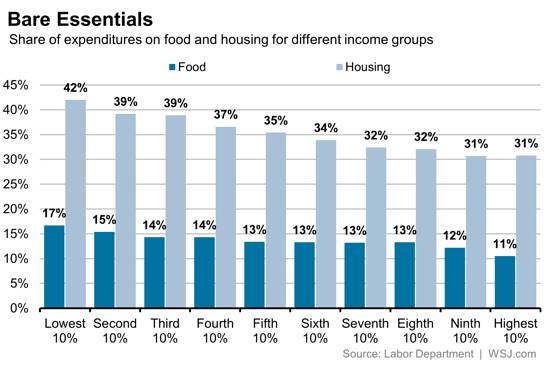 Contrary to perception, not all food and housing is covered by the welfare state, with many lower class Americans paying out all their wages just to get by with the basics – leaving scant to nothing for everything else.

Take a look at this chart based on Labor Dept. statistics: 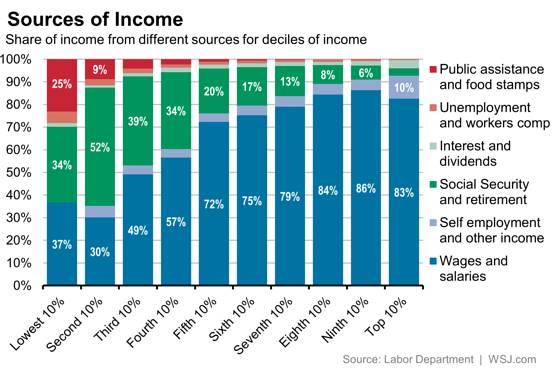 The richest spend less, proportionally, on food and housing, as do the upper half of Americans, who average less than a third of income on homes and only about 11-13% on food.

By contrast, the world’s poorest billions, who often live on less than a dollar a day, typically spend 50% of their money alone on food for sustenance, putting prosperity even beneath the dream level. Not surprisingly, most of these people live in unstable, chaotic and often war-torn regions.

The difference in theses percentages are huge in much more than just disposable income. It is the deciding factor in terms of the ability to save money, secure retirement and education, pay off debts and especially to deal with a crisis.

Far too many Americans are already teetering on the edge, and emergencies of any kind – including personal, family illness/injuries, economic or natural disasters and much more – are enough to drive most to either capitulation at the hands of government assistance or worse – desperation.

David Quintieri, commentator and author of The Money GPS, is warning that this kind of extreme economic pressure is likely to trigger civil unrest and riots.

With the past many years yielding no real signs of opportunity or enthusiasm for average Americans, there is plenty of reason to think that other echelons of society are following suit, where a slide to poverty becomes a collapse.

The worry is that these numbers only signal a slide in that direction for the rest of the nation’s poor – who are also economically strapped – and behind them the quickly disappearing Middle Class, with many already treading water to make ends meet and carrying significant debt loads.

When desperation sets in, order goes swiftly with it. After that, riots, unrest and martial law. We all know the pattern.

Worse, we all know the system – propped up by a swelling nanny state giving out freebies and handouts to a disturbingly dependent class of masses – cannot last and is doomed by design to collapse.

How long until we see riots in America – not just over media-driven issues as in Ferguson – but over sustained, untenable economic desperation from the bottom up?

The hour is getting late. It really may not be long…