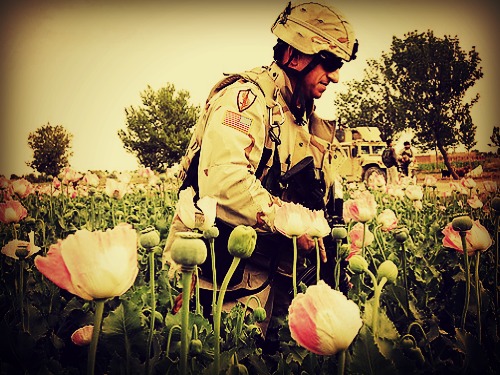 “…the US counternarcotics mission in Afghanistan stands out: opiate production has climbed steadily over recent years to reach record-high levels last year.”

“Far from eradicating the deep-rooted opiate trade, US counternarcotics efforts have proven useless, according to a series of recent official inquiries. Other aspects of the billions that the US has poured into Afghanistan over the last 13 years of war have even contributed to the opium boom.”

“In December, the United Nations reported a 60% growth in Afghan land used for opium poppy cultivation since 2011, up to 209,000 hectares…”

“…the [UN] inspector general also noted that US reconstruction projects, particularly those devoted to ‘improved irrigation, roads, and agricultural assistance’ were probably leading to the explosion in opium cultivation.

“'[A]ffordable deep-well technology turned 200,000 hectares of desert in southwestern Afghanistan into arable land over the past decade,’ the inspector general found, concluding that ‘much of this newly arable land is dedicated to opium cultivation.’”

In Colombia, the US government proved it could eradicate coca and opium-poppy growing fields. One of the solutions was an herbicide called Roundup. You may have heard of it.

But in Afghanistan, the US just didn’t remember that. It skipped their mind. Oops.

Suddenly, the Afghanistan mission became one of good will. Mustn’t upset the farmers. In Colombia, upsetting the farmers was perfectly alright.

When you can lessen a problem but choose not to, you want the problem to persist. It’s simple.

And at that point, the problem becomes an opportunity—it always was.

Since the US government has been consciously facilitating the growth of opium farming in Afghanistan, it stands to reason that government players have been taking their cut of the action.

If the US government, which has been fighting a full-scale war in Afghanistan, wanted to destroy the opium-heroin business in that country, it had the ideal opportunity.

The mission would have been far easier than waging “the war against drugs” in Mexico, where US military intervention has been limited.

In Afghanistan, there were US troops on the ground. There were air attacks. What else would you need?

Pentagon planners spend their lives working out multiple scenarios for possible wars in various regions of the planet. They take into account all aspects and contingencies.

In planning for a war in Afghanistan, what to do about the opium-poppy growing fields would have been high on the list of options.

So opium-poppy farmers were no “delicate problem” the US invading force encountered after entering the country. There were no surprises.

Since the US invaded Afghanistan, the Army knowingly undertook operations that would definitely expand opium-poppy agriculture.

Of course, the CIA’s connections to the drug trade in Afghanistan go back a long way, so it’s no surprise that the US war in Afghanistan has facilitated and expanded opium-poppy production.

Peter Dale Scott, in his essay, “Drugs, Contras, and the CIA,” writes:

“[Circa 1980], the CIA was arming and advising heroin-trafficking guerrillas in Afghanistan. Its preferred leader, Gulbuddin Hekmatyar, became for a period one of the leading heroin suppliers in the world.”

“[CIA officer] John Millis had served for thirteen years as a case officer supplying covert CIA aid to the heroin-trafficking guerrillas in Afghanistan…At least one of the airlines involved in the Afghan support operation, Global International Airways, was also named in connection with the [US] Iran-Contra scandal…”

The war against drugs? A towering joke.

Courtesy of Jon Rappoport of No More Fake News.