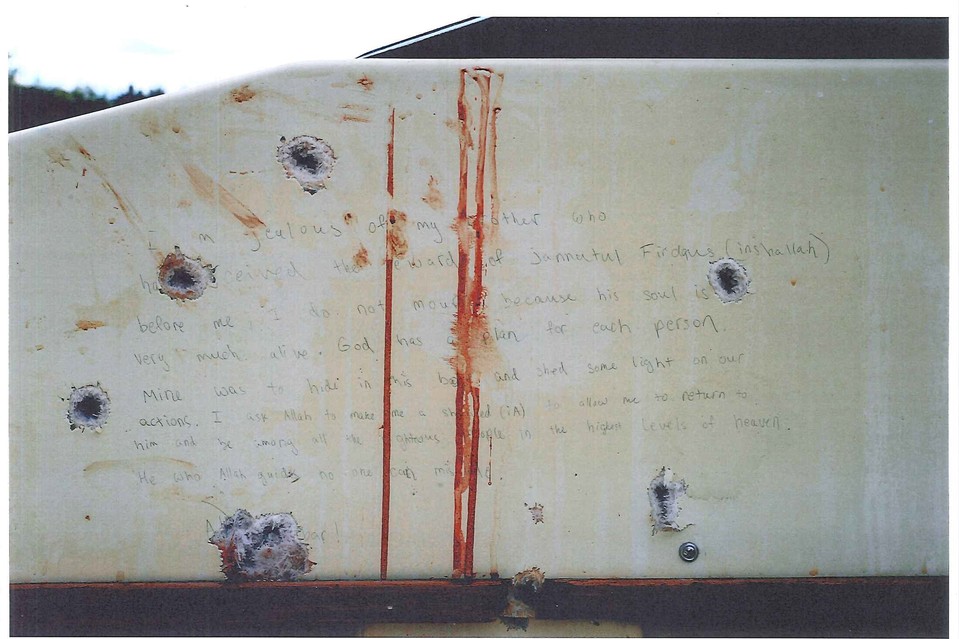 Wednesday, April 8, 2015, in a U.S. district court in Boston, after only 12 hours of deliberation, the jury convicted 21-year-old Dzhokhar Tsarnaev on all 30 counts of the Boston Marathon bombings on April 15, 2013. Seventeen of the 30 counts carry the death penalty. The same jury will now decide whether to sentence Tsarnaev to death or give him life in prison without possibility of parole.

Incredibly, Tsarnaev’s defense team didn’t say he was innocent. Instead, the defense admitted he had carried out the bombings, but blamed Dzhokhar’s older brother, 26-year-old Tamerlan, for having “masterminded” the bombings. Tamerlan Tsarnaev didn’t make it to trial because, we are told, he was gunned down in the evening of April 18, 2015, in a shoot-out with police in Watertown, a suburb of Boston, then run over by his younger brother in a stolen SUV.

I wrote “we are told” because there’s this video showing what appears to be a naked, unwounded and very much alive Tamerlan being handcuffed and escorted into a Boston Police Department vehicle. According to 21stCenturyWireTV that uploaded the video to YouTube on April 20, 2013, the video had appeared on Brazilian TV earlier that day (April 20).

Please make a note of the image of “Tamerlan” with a well-trimmed beard at the 0:17 mark. Here’s a screenshot I took.

There are at least two reasons for us to be skeptical of the culpability of Dzhokhar and his older brother Tamerlan.

Remember this much-publicized image of the Tsarnaev brothers at the marathon?

The image is from an FBI video, and was widely circulated by the media. Note that the Tsarnaevs were not actually depicted as depositing their backpacks that presumably contained the bombs. But just the image of the two was enough to convince us they had been present at the marathon.

The only problem is the FBI video doesn’t exist.

On April 18, 2013, Richard DesLauriers, Special Agent in charge of the Boston Division of the FBI, gave a press conference in which he asked for the public’s help to identify two suspects (who later were identified as Tamerlan and Dzhokhar Tsarnaev) for the bombings. DesLauriers said:

After a very detailed analysis of photo, video, and other evidence, we are releasing photos of the two suspects. They are identified as Suspect 1 and Suspect 2. They appear to be associated.

Suspect 2 set down a back pack at the site of the second explosion just in front of the Forum Restaurant….

As you can see from one of the images, Suspects 1 and 2 appear to be walking together through the marathon crowd on Boylston Street in the direction of the finish line….

Further, on FBI.gov, we have videos of the suspects. The photos and videos are posted for the public and media to use, review and publicize.

Here’s the video released at the press conference:

New York Daily News reports that in a pre-trial hearing on March 2, 2015,Dzhokhar’s defense attorney David Bruck made a “stunning assertion” that a video billed by the FBI as a caught-in-the-act piece of evidence “does not exist.” From the Daily News:

The feds claimed the video, which was never made public,showed Dzhokhar Tsarnaev dropping a backpack concealing a homemade bomb next to a 6-year-old boy who was killed.

At the time, FBI officials only released still photos of Tsarnaevmingling with finish-line revelers near where little Martin Richard was standing. Other photos made public showed both Tsarnaev brothers walking through the crowd before the explosions carrying backpacks.

A friend of Tamerlan, Manatov Khairullozhon, said he had dinner with the Tsarnaev brothers at the Somerville Cafe on the evening of April 15, 2013, where he observed Tamerlan was wearing a beard. Khairullozhon went to the authorities when he saw the FBI images of a clean-shaven Tamerlan at the marathon to inform them that he and Tamerlan, sporting a beard, had had dinner the night before, but they did not want to hear it. For coming forth, Khairullozhon has been targeted and abused and is being prosecuted for obstruction of evidence.

Tamerlan’s now-you-see-it now-you-don’t beard is why his aunt, Maret Tsarnaev, believes the surveillance video and the images of the two brothers at the Boston Marathon are fake.

There are so many questions we can ask Dzhokhar Tsarnaev’s defense team:

For all the posts FOTM has published on this subject, go to our “Boston Marathon Bombings” page.

Editor’s Note: I would add a third reason to the list and that would be Tsarnaev’s supposed confession. Are you aware that, under the cover of darkness, Dzhokhar was somehow able to write a confession on the inside of a fiberglass boat, and just happened to have the special writing instrument required to do so? The almost perfectly straight lines, written on a less than flat surface is a feat that would make Michelangelo proud. There is some question if it is even possible to do what Dzhokhar did (while he was lying down and presumably under cover of the tarp). So the obvious question would be, “If he truly is guilty, why would they need to manufacture a fake confession?“ Read more here… 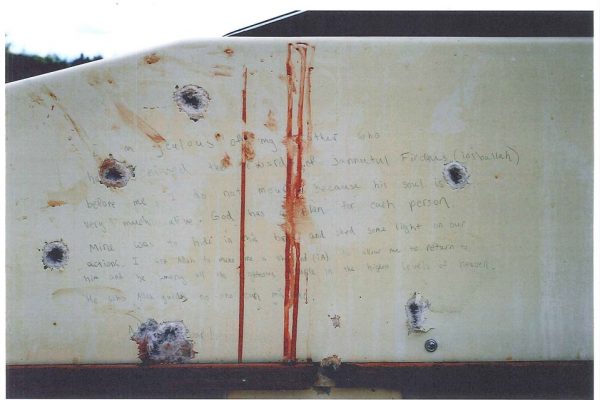