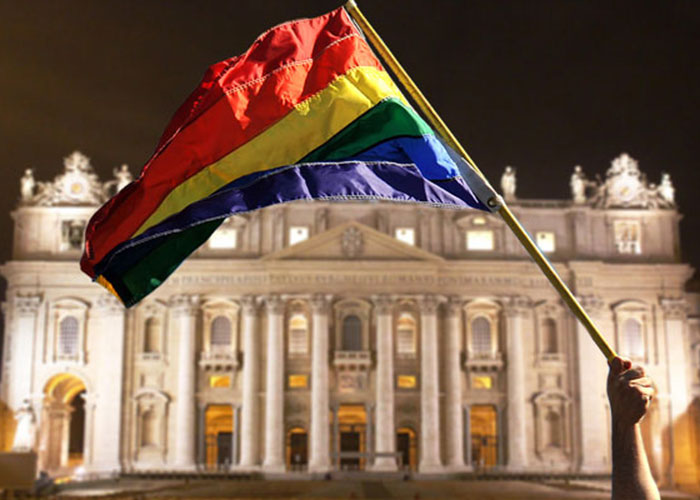 The Vatican has been embroiled in two separate, highly embarrassing, scandals.

The other, which has generated – if possible – even more lurid press coverage in Italy, alleges a priest in the south of the country is under investigation on suspicion of murdering one of his parishioners.

Father Gratien Alabi, from the Democratic Republic of Congo, is under investigation for murder following the discovery of female bones under the flagstones of an ancient mountain chapel.

The bones are anticipated to belong to Guerrina Piscaglia, 50, who disappeared from nearby Arezzo in Tuscany last year, The Times reported.

The case has generated intense media interest, with some papers claiming that Father Alabi had engaged in an affair with the woman, a parishioner of his and another priest’s church, and fathered a child with her.

Father Alabi has denied all claims, protesting his innocence.

Meanwhile, to the north of the country, the local Curia is scrambling to address the allegations made by a 32-year-old man from Rovigo, midway between Bologna and Venice.

The unidentified man apparently approached the media after church authorities failed to take action following his official complaint to the Ecclesiastical Court of the Puglia region against the unidentified 50-year-old priest.

The younger man claimed he met the priest through Facebook, forming a close friendship with the clerical figure who then confessed his homosexuality to his online correspondent.

In his complaint, according to Italian newspaper Corriere del Mezzogiorno, the man included a record of his conversations with the priest.

In these online interactions, the priest admitted to sexual relationships with other religious figures – as well as members of the Vatican’s elite Swiss Guard – using the internet to find new partners and engage in sexual encounters online.

Following the involvement of Archbishop of Taranto Filippo Santoro, the individual involved was immediately removed from office, once the “reliability of the facts” had been established.

He added that the allegations included behaviour that was “absolutely incompatible with the priestly ministry.”

“Needless to say, the feelings of the archbishop and the Curia are those of the regret and dismay,” a Vatican spokesperson told the Italian newspaper.

There is a very dangerous homosexual supporting ring deeply entrenched in the Vatican, which is helping enable it when it conducts mass with such a depraved heretic.

I have myself experienced, to some measure, this homosexual supporting ring in the Catholic Church, in a conversation I had with one priest and Catholic canon law judge, named Robert L. Kincl (also known as Fr. Bob Kincl), who was ordained in Rome. Kincl had befriended us as a fan of Shoebat.com acting as conservative, yet referred to homosexual fondling as permissible in the conversation. Having been shocked at his remarks, I told Kincl:

How can you, as a priest, be so liberal toward such a sick evil as two men fondling each other, or as two men having a “relationship” just as long as they are not going with other men. It is evil and it is reprobate.

I also told him:

It is not tolerable for you, as both a priest and a canon law judge, to be permissive to somebody having a homosexual relationship just as long as they are not being promiscuous with other men. It is deplorable, and in the words of St. Paul, “worthy of death” (Romans 1:32).

Kincl defended his position and responded with a rejection of the Old Testament and a twisting of St. Paul’s condemnation of homosexuality in Romans, stating:

We do not follow the Hebrew Scriptures. We follow Jesus Christ who never mentioned gay relationships. When St. Paul mentioned such a relationship he was referring to the promiscuousness of the Romans using sodomy.

Shoebat.com decided to investigate Kincl and found that he has a dark past. In 1993, Kincl worked as a Commander in charge of clergy at the U.S. Navy, and while he was in the service he defended another chaplain confirmed to be guilty of child molestation, named Robert Hrdlicka.

The investigation revealed that Robert L. Kincl had even written the authorities, not to charge the pedophile who molested the young boys, but urged them to send him back to serve as a chaplain:

Catholic chaplain Lt. Robert Hrdlicka pleaded guilty to molesting boys in 1993. Before his sentencing, six other Catholic Navy chaplains and the church’s archbishop for the military services urged authorities to send Lt. Hrdlicka to a church-run treatment center.

“It is my fervent hope and prayer that he will be able to return to the active ministry as soon as possible,” wrote then-Cmdr. Robert L. Kincl.

Instead, Lt. Hrdlicka went to prison.

Shoebat.com looked up Kincl’s My Life page, to find out that after all these years Kincl is still friends with Hrdlicka the pedophile, since he is on his friends list, of which I took snapshots:

Kincl is now serving as a priest in Our Lady’s Maronite Catholic Church alongside Msgr. Don Sawyer. When I confronted Sawyer on Kincl, Sawyer vehemently defended Kincl.

We asked them how could someone who supports homosexuality and defended a pedophile still be serving as a priest and not be excommunicated, to which Deacon Ron Walker, rolling his eyes, said that the Church’s main objective would be to reconcile him with God, and not excommunicate him.

It seems that the Diocese of Austin could care less if one of its priests supports homosexuality and defended a pedophile.

Why is this man serving as a priest when the Catholic Church, in its teachings, forbids homosexuality?

It is not surprising to see how far reaching homosexuality has gone in the Vatican. What other deviancies will enter the Vatican in the next decade remains to be seen. Whatever happened to normal sin? In the good old days, steeling a chicken perhaps constituted such sin, but these days, it’s sleeping with it.

While we were doing some work in Texas we were told of a man named Msgr. Michael Yarbrough (also known as Michael Yarborough), and how he is a deviant priest who forcefully kissed a young man named Hector Escalante on the lips, and how he was supporting a pro homosexual group called Call to Action.

Well, we decided that we were going to bait Msgr. Michael Yarbrough. I visited him in a confessional booth where I told him my age and apparently it registered an interest, and he asked me if I wanted to come and hang out with him. He fell for the bait. I found it very odd that a priest of his high position, with a very busy schedule, would all of a sudden want to spend time with me.

I accepted his offer, and gave him a call, and asked him if we would meet at a book store. He said that he preferred that we meet in his office. I found this quite disturbing because it was in his office where he kissed Hector Escalante. When I did research on Msgr. Michael Yarbrough, I found a 2002 report written in the San Antonio Express which stated:

Hector Escalante complained that Monsignor Michael Yarbrough kissed him on the lips and groped him in his office in 1998, when Escalante was 27, on his last day on the job as a St. Matthew’s Parish employee.

Yarbrough admitted kissing him but said Escalante misunderstood the gesture, which the priest said was common among men in his family. He denied groping Escalante.

Imagine, a man kissing another man on the lips as “common.”

So, we had the meeting at the bookstore, and after some conversation, I busted him on his heresies and his scandals and also paid a visit to his church, where I was eventually kicked out by his followers (who probably know nothing on how evil this heretic is). Here is the video:

Christianity is not about sycophancy, its about war against evil and the devil. We must arm ourselves to fight in this war. CLICK HERE TO GET OUR NEW 2-DISK DVD SPECIAL ON CHRISTIAN MILITANCY AND PREPARE YOURSELF FOR THE WAR AGAINST ISLAM, TYANNY, AND THE FORCES OF DARKNESS