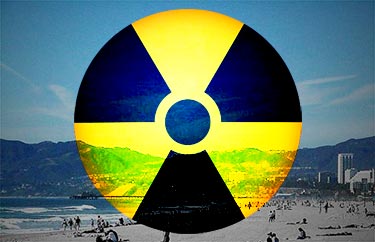 The mainstream media and their experts are finally openly admitting that radiation from the crippled nuclear reactor at the Fukushima Daiichi Nuclear Power Plant, the initial meltdown of which was equivalent to 168 of the atomic bombs dropped on Hiroshima during World War II, has reached North American shores, but don’t worry.

Everything, according to the system, is just fine and dandy.

It’s the first time radioactivity from the March 2011 triple meltdown has been identified on West Coast shores.

Woods Hole chemical oceanographer Ken Buesseler emphasized that the radiation is at very low levels that aren’t expected to harm human health or the environment.

“Even if the levels were twice as high, you could still swim in the ocean for six hours every day for a year and receive a dose more than a thousand times less than a single dental X-ray,” Buesseler said. “While that’s not zero, that’s a very low risk.”

Yeah. That’s a “very low risk.” The risk is so incredibly low in fact, that the EPA collectively shrugged and went, “Eh, no big deal, who cares” as they shut off radiation monitors back in 2011 not long after the 9.0 earthquake hit Fukushima.

Also hurry up and forget the fact that the government found it within their infinite wisdom to raise the limits for radiation exposure post-Fukushima as well. Can’t be bad for you if it’s “within [continuously raised] safety limits.”

Also don’t look too deeply into the fact that a disproportionately high number of Fukushima survivors are getting cancer… The the United Nations Scientific Committee on the Effect of Atomic Radiation (UNSCEAR) has concluded that not only were there no immediate health effects but the Fukushima disaster, “is unlikely to be able to attribute any health effects in the future among the general public and the vast majority of workers” (key word: attribute).

Meanwhile, the crippled reactor continues to dump 400 tons of irradiated groundwater a day, every day, into that ocean, but come on guys. The power company TEPCO, which is 75% owned by the Japanese government, says that the radiation somehow is magically quarantined right in front of the plant and magically does not spread throughout the ocean in an act that defies all scientific logic whatsoever:

Tokyo Electric Power Co.’s claim that radioactive water leaking into the sea from the wrecked Fukushima nuclear plant is confined to the coast doesn’t make scientific sense, according to a U.S. researcher who surveyed waters off the site last month.

Japan’s government has supported the utility’s statement that the irradiated groundwater flowing into the Pacific Ocean at a rate of some 400 tons a day remains in an area of 0.3 square kilometers (0.12 square miles) within the bay fronting the atomic station. [emphasis added]

So why not go ahead and go swim in the Fukushima radiation contaminated ocean for six hours a day? The technocracy’s propaganda pushers and “experts” say it’s perfectly safe.