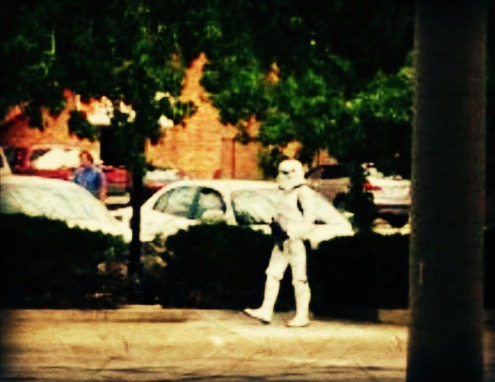 Sure, this story happened a little while back, but it still stands as a statement on modern-day Police State America that this even happened to begin with.

The American police state is so ridiculously tyrannical and out of control, and post-9/11 Americans are so insane with fear, that a man can’t even dress up in a stormtrooper costume in the middle of the afternoon in public without some concerned citizen calling the cops and businesses in the area going on lockdown until the police can “check out the situation.”

This happened in the open-carry but war-torn, post-9/11 battlefield of Salina, Kansas back in August (via KWCH12):

It happened in Salina Monday, and it prompted a brief lockdown of at least one downtown business. Salina Police say officers responded to the report of an armed man in the 100 block of S. 7th Street.

The call came from nearby business, Action Travel, as a customer saw what appeared to be a man in a costume, carrying a weapon. Police advised the business to go into lockdown as police checked out the situation.

“Maybe we should call, just make a call,” Action Travel employee Janelle Snyder said. “Due to the stuff that’s happened out in Colorado at the theater and just weird stuff. If he wouldn’t have had the gun, we wouldn’t have thought about it.”

Police said Chris Burns and a friend were shooting a video for a Vine, and the weapon was a plastic prop gun. Burns created a vine account called Stormtrooper Sam on Thursday. He has almost 200 followers.

Yep. One concerned citizen did their Statist duty and informed officers that some man was wearing a costume in broad daylight on a Monday afternoon in America. Good job, Statist! For such valiant action, you have been awarded Statist of the Year 2014. Your autographed, framed Dick Cheney portrait should be arriving soon if it hasn’t already.

The stormtrooper wannabe is lucky he wasn’t tased within an inch of his life or just shot on sight, no questions asked.

Comments on the story include,

“This is the stupidest thing I’ve heard of.”

“Um, it was a Stormtrooper… How the hell do you NOT know it’s a FRIGGIN STORMTROOPER!?!? HE’S WEARING A FRIGGIN’ COSTUME! OMG, I give up on the human race!”

and “Besides, even if he had started shooting, he wouldn’t have even come close to hitting anything,” (you know, because those stormtrooper helmets make it kinda hard to actually see anything).

The debate over whether or not a fake plastic directed energy weapon would even count the same under open carry rages on, but surely our , er, lawmakers have already moved to amend laws to make sure they explicitly state that stormtrooper costumes and blasters are just as dangerous as the Obama Administration wants to brainwash you to think every gun and bullet in the hands of the people and not the government is.

You know, in the same proud tradition that Tennessee is now banning toy guns not just in schools, but 150 feet near a school.

In the meantime, fun in public will be likely also be outlawed straight away as a dangerous, deadly weapon just the same way that 4th graders using magic rings from The Hobbit are expelled from school for making “terroristic threats” to make their friends disappear.

On a side note, can reading the news give you a rash? Just checking.

(And no, the source material for this story is not satire. Hat tip Scott Lopez.)