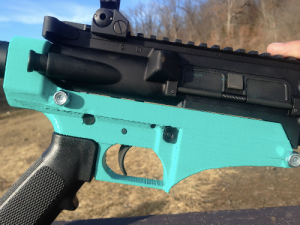 When Cody Wilson unveiled the first 3D printed firearm in 2012, it was earth-shattering news. Even though the gun had limited practical applications in the real world, it was still an incredibly novel concept with huge implications for the future. Since that time, several additional homemade firearm designs have caused both outrage and adoration from the public, especially in regards to 3D printed AR

However, it seems like the whole 3D printing scene has cooled off a bit. It’s a little under the radar now. People are getting used to the concept, and as the technology continues to make progress you’d be hard pressed to find as many sensationalist headlines as you could before. But rest assured that the movement to manufacture firearms at home is still making waves, as it paves the way for a future where no firearm is out of the reach of a 3D printer.

PrintedFirearm.com , a website devoted to 3D printing of guns, announced that one of its members successfully developed a lower receiver for a Colt CM901 rifle. The receiver for the CM901—which is considered to be a much stronger brother of the popular AR-15 assault rifle—was crafted on a XYZ Da Vinci printer, which normally costs around $500 – considered cheap in the 3D printer world. While they were not the first to 3D print a lower receiver, it seems as if Printed Firearm has taken an evolutionary step.

“This is the FIRST EVER 3d Printed AR-10 (CM901/LE901) lower receiver by JT,” reads a blog post on PrintedFirearm.com. “OH YES WE DID!!!!!!! Yes people its pure awesome sauce and it has been tested, fired with little to no issues.”

So what’s so special about this particular design? It can handle much larger calibers than its predecessors, up to and including the 7.62x51mm NATO round. It’s also the first of its kind to be made with a cheaper mid-range printer.

It sounds like a small improvement, and it is. Even the website that first posted it is downplaying the news.

Just because this particular gun shoots a different caliber it is not a huge advancement in terms of what the end product is. The principle is the same as any other 3d printed gun or homemade gun for that matter. The only reason 3d printers achieve this reaction or attention is because it is something new. Guns have been legally made by individuals in the USA using much simpler technologies as far back as one can look.

However, the real news here isn’t this new AR lower design. It’s the very fact that it has been downplayed. The idea that making a firearm lower in the comfort of your own home is becoming so commonplace that it fails to entice more than a collective shrug from the public, is incredible.

I already know what some of the commenters are about to say, “Geez, talk about a slow news day.” But come on, we’re on the cusp of a new age of decentralized gun manufacturing. Someday we will wake up in a world where homemade firearms are the norm and nobody will notice. Nobody will think twice about it.

And that’s great news, because when that day arrives it will be that much harder for lawmakers to ban it. It’s easy for busybodies to outlaw niche hobbies with big headlines. There’s plenty of outrage and not enough people invested in it to stop them. But when everybody can do it and it becomes an accepted part of everyday life, policymakers will have a huge hurdle to cross.

They can’t just ban it and delete a handful of angry emails. This latest development means more accessibility, so now they have to placate more people who are capable of making these items. It’s still possible, but it’s more difficult. This trend will continue until millions of people have the means to build these items, which means millions of people will put up a fight against anyone who tries to stop it. Once a technology becomes so thoroughly woven into the fabric of society that it becomes unremarkable, it’s almost impossible to remove.

So here’s to the greatest milestone in 3D printing that history will most likely forget. In terms of securing the right of self-defense for the masses, this is the best thing that could have happened.