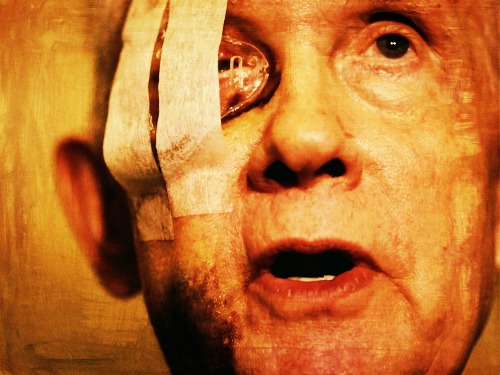 Some have suggested it was Chinese mafia or even Hillary Clinton, but let’s stop beating around the bush (bad pun). Who beat the crap out of Nevada Democrat Senator Harry Reid?

A few months back Senator Reid, who has previously admitted he’s very excited about the fact that that Obamacare is essentially just a clever way to dupe America into a socialist one-payer healthcare system that is totally controlled by the government, showed up to work looking like someone beat him up.

At the time, Reid, who has extensive corrupt multi-billion-dollar dealings with Chinese energy companies that would require the Bundys to get the hell off their land in Nevada in short order possibly prompting that whole stand off with the Bureau of Land Management last year, claims the injury came from an exercise accident on New Year’s day.

Reid, who was so right for his job as Nevada Senator that people didn’t even have to vote for him because the voting machines in that state were automatically checking his name at election time, originally explained at a press conference back in January:

“I was doing exercises that I’ve been doing for many years with those large rubber bands and one of them broke and spun me around and I crashed into these cabinets and injured my eye.”

Aside from the fractured eye and bruised face, Reid also somehow hit his bathroom cabinets so hard, he wound up in the same instant with not one but four broken ribs.

In the original version of the story told for weeks afterward, this “accident” occurred in Reid’s bathroom. However, Reid’s exercise story, which pretty much no one believed from the get go anyway, later changed in two key ways.

But now… Reid tells Univision anchor Jorge Ramos that the exercise band “slipped,” rather than “broke.”

Now, however, Reid tells Ramos a different story. The exercise band was not attached to the shower door in his bathroom, Reid says, but was instead attached to “a big metal hook that came out from the wall” in an unspecified room in his new Nevada home.

So, Reid doesn’t even know what exactly he was doing with what or where in his home when this “accident” befell him.

Such “accidents” are certainly a normal occurrence in and around the shady paradise of Las Vegas, Nevada, a city whose mob likely underwrites Reid’s political power.

Reid has since lost sight in his afflicted eye and has publicly inferred he might sue the exercise equipment business that made the piece of equipment that he can’t remember how he was using or where he used it when he hurt himself all by himself in a way that totally looks like someone beat the living crap out of him.