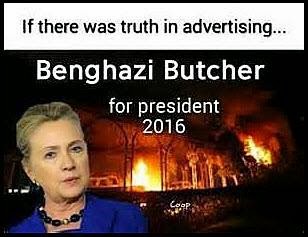 Well she’s running folks…didn’t think in the end that she would but she is.

Hillary Rodham Clinton made it official yesterday and now the ‘fun’ begins…if you call a chance that ‘Ms.Pant-Suit‘ could win the presidency in 2016 ‘fun.’ The woman more commonly and so rightfully known as the ‘Butcher of Benghazi’ has a lot of explaining to do as we on the conservative side will continue to pick her apart…one slimy, nasty, lying, traitorous piece at a time.

Hillary Clinton…so desperate to be America’s first woman president…so desperate that she’s been running for president since the day her hubby left office…is NO Margret Thatcher nor is she Golda Meir…both strong women who had the brains, fortitude, and know-how to lead their respective nations…and poor Hillary has none of those attributes. Hillary Clinton as president would be nothing but a third term for Obama…a continuation of a failed presidency as both Obama and Clinton have NOT a clue as to what constitutes reality in today’s extremely dangerous and volatile world. 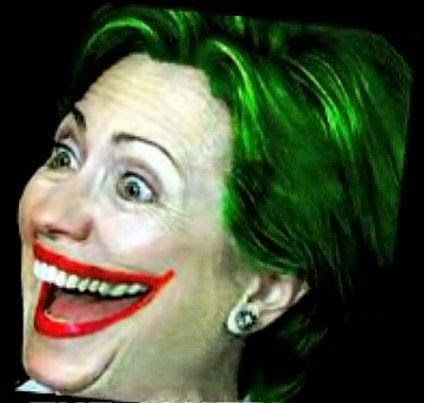 And when you think about it…I mean really think about it…what has Hillary accomplished that’s benefited our country…in a word ‘NOTHING.’ Raking up over one million flier miles as Secretary of State does NOT an accomplishment make…it was just a way for her to ‘get out of Dodge’ so to speak…and to do so as she promoted Obama’s anti-America socialist agenda. And with her being as big a socialist and bleeding heart liberal as Obama himself…when you add in the required and all-important islamist sympathizer for good measure…Hillary Clinton is the stuff of America’s worst nightmares yet the stuff liberals, the co-exist kumbaya sorts, the you owe me ‘sponges’ of society, and supporters of the U.N.’s Agenda 21 salivate over. 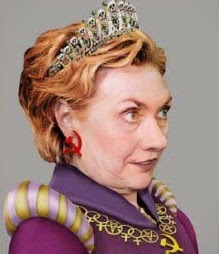 And so the infamous ‘queen of the deleted e-mails‘ announced her…and the media’s…believed to be ‘ascension to the throne’ on social media with a facebook page, a video*, a tweet (“I’m running for president. Everyday Americans need a champion, and I want to be that champion.”), an email to donors, and a web site (https://www.hillaryclinton.com)…a ploy right out of Ted Cruz’s announcement playbook… before heading off to Iowa to test the waters.

And Hillary has hired several of Obama’s former campaign strategists and handlers to work on her campaign and you know what that means…dirty politics at its best. Made-up accusations and lies about her Democratic challengers will be the rule of the day…and know that Hillary is NOT the shoe-in she thinks she is as former Virginia Senator Jim Webb and former Rhode Island Governor Lincoln Chafee have both officially launched 2016 presidential exploratory committees, with former Maryland Governor Martin O’Malley considering doing so as well. And the fabrications and lies about her Republican challengers will be ‘one for the books’ as they say for I can guarantee you they will be on par with or better than ‘Prince’ Harry Reid’s lies about Mitt Romney paying NO taxes for ten years…lies which he still has refused to apologize for and probably never will.

So many stories and lies for Hillary to tell…it will be a wonder if she can keep them all straight. And this is important…we must counter them with truths every step of the way and make sure people know about her and her hubby’s very infamous past…and what a past it is. Do the words Whitewater, Vince Foster, Chinagate, and Lootergate ring a bell…they should because if it wasn’t for her having the Clinton name both she and Billy-Boy would be sitting in a 5′ by 7′ jail cell right now. In fact, Hillary’s infamous past alone goes way back to the Nixon days when she played a part in Watergate…a part that included her being fired…YES fired…from the House Judiciary Committee staff for unethical behavior as she helped prepare articles of impeachment against Nixon. 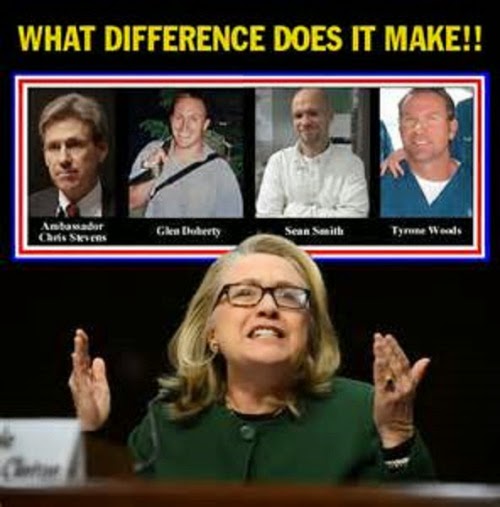 Must NEVER be president if for NO other reason than Benghazi. Benghazi…where four brave Americans died while Hillary looked away…where she never responded to their pleas for help…where she helped Obama concoct a cover-up story so ludicrous in nature that if it wasn’t so pathetically sad it would be borderline funny…and where her oh so infamous words “What difference does it make” will forever come back to haunt her…and rightfully so even though the media continues to ignore the callousness, coldness, and sheer depravity of those five most sinister of words. 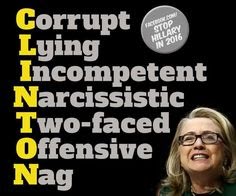 And the lies and deceit along with a smattering of sheer stupidity continues to this day for remember back some months ago when Hillary said, “Don’t let anybody tell you that it’s corporations and businesses that create jobs. You know that old theory, trickle-down economics. That has been tried, that has failed.” Hate to break the news to her but the very entities she says do NOT create jobs are the very entities that do create jobs. While the backbone, so to speak, of our economy might well be small businesses it is large businesses and corporations that hire the most people…that put the most people to work. And how does Hillary intend to create jobs if there are NO businesses to create them for…I guess she was absent that day in economics class when the lesson on how to create jobs was taught.

Sheer stupidity upped a notch as who can forget Hillary’s “It takes a village to raise to raise a child,” nonsense along with her more recently saying, “We must stop thinking of the individual and start thinking about what is best for society.” How sad is it that this woman now running for president…just like the traitor currently occupying the White House…seems to ignore the important concept of personal responsibility for it’s NOT the job of others…as in the ‘so-called’ village…to raise someone else’s children for them…that’s a parent’s job and a parent’s job alone.

And as for putting society as a whole before the individual…Hillary…like Obama… forgets that it’s our individual inalienable rights…rights deemed so important that our ‘Founders and Framers’ built our nation upon those very rights…rights that separate us from all other nations…rights Hillary’s words spoken show she has NO intention of honoring if she ever…God forbid…became president. And yet another thing Hillary has NO intention of honoring is the fact that we are at war with islam… NOT radical islam…all islam…as islam is islam is islam. Remember when Hillary said at Georgetown University, “We have to empathize with our enemies.” Adding that we must“empathize with their perspective and point of view.” Guess that goes hand-in-hand with her saying, “In the Bible it says they asked Jesus how many times you should forgive, and he said 70 times 7. Well, I want you to know that I’m keeping a chart.” Hillary might be keeping the chart but I’m sure Huma Abedin is the one keeping the score. 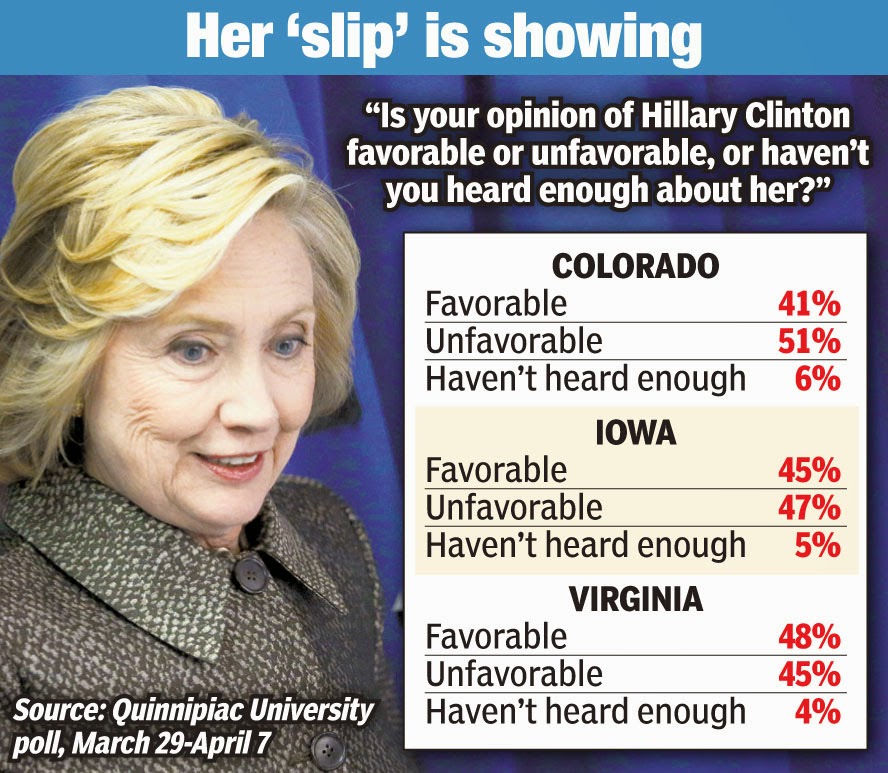 But thankfully some are indeed unplugging their ears as a new Quinnipiac poll shows Hillary’s lead against front-running Republican hopefuls is dwindling in the critical swing states of Colorado, Iowa, and Virginia. And why is this happening…after all Hillary is the media anointed successor to Obama’s throne of sorts…so why…because those responding to the poll believe she is NOT honest nor trustworthy. And those negative numbers have greatly increased after Hillary dared to delete and erase possible incriminating e-mails after being told by Congressional investigators NOT to do so.

And that on top of Benghazi, Lootergate, Chinagate, Vince Foster, Whitewater, Watergate, and assorted other ‘gates,’ scandals, and ‘so-called’ irregularities too numerous to mention, seems to have been the straw that broke many backs… including the backs of members of her own Democratic party as now it appears that even the DNC is trying to distance itself from her while hoping Elizabeth Warren will throw her ‘feathered headdress’ into the ring. 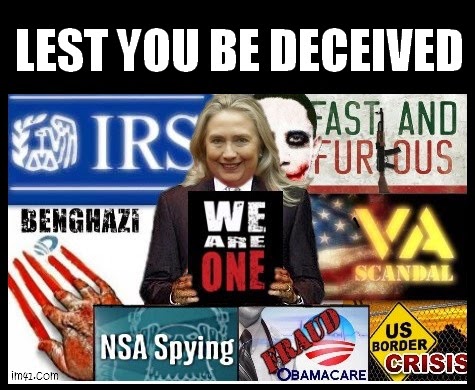 So as Hillary tries to convince both the party loyal and those now starting to cringe at the thought of yet another Clinton presidency…a two-fer because with Hillary you get Billy-Boy…why she above all others is deserving of the White House…why she and she alone must be America’s first woman president…why she is ‘owed’ the presidency NO matter the scandals that currently surround her…NO matter the scandals leftover but NOT forgotten from when she was First Lady…this most vile of women will sadly still have the sheeple and kumbaya sorts stuffing her already burgeoning war chest with which she and they hope can buy her an election.

And folks we cannot and must NOT allow that to happen for Hillary Rodham Clinton as president…with possibly La Raza raised and communist-leaning Julian Castro as vice-president…will indeed be the death knell of all we as Americans hold dear. And our ‘Founders and Framers’ will NOT only turn over in their graves but will have we conservatives to rightfully blame for NOT fighting hard enough to assure that their dream of liberty and freedom survives this pant-suited woman who would be king.

* See Hillary’s first of what will be many untruthful campaign ads here: