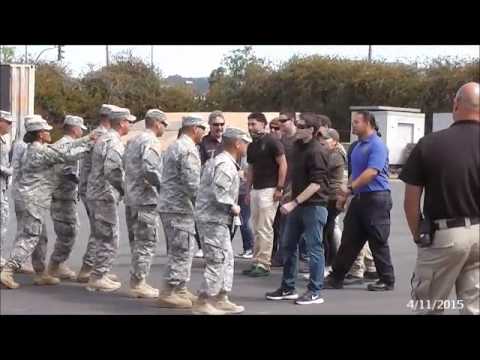 The exercise, which Infowars reporters were barred from attending, took place in Richmond this past weekend and involved more than 200 soldiers, airmen, local law enforcement and firefighting personnel.

“Why in the course of a drill for a dirty bomb, would an actor claim to be a sovereign citizen?” asks Keith Johnson, who filmed the footage. “The San Francisco Bay Area is not known for it’s sovereign citizen militia population and hearing this shouted during a mock terrorist scenario was disturbing. Anybody familiar with Richmond will tell you it is not a rural ‘militia’ environment. Located in the East Bay Area near Oakland, it is a community with reduced circumstances. No one there is going to be proclaiming to be a sovereign citizen.”

Johnson goes on to express his concern that young National Guard troops are being conditioned to accept a ‘Kent State’ mentality where their role will be to police unruly mobs of liberty activists.

Back in February, the Department of Homeland Security circulated an intelligence assessment which focused on the threat posed by right-wing sovereign citizens and other domestic extremists. CNN subsequently reported that federal and local law enforcement groups view sovereign citizens as a bigger threat than ISIS or any Islamic terror group.

Sovereign citizens refuse to acknowledge federal law and believe the U.S. government is illegitimate. Members of the movement have been involved in sporadic violent confrontations mainly targeting police officers over the last five years.

Sovereign citizens are habitually lumped in with law-abiding conservatives and libertarians whenever the federal government publishes reports on the subject of domestic extremism.

As we have exhaustively documented, the federal government has consistently downplayed the threat of Islamic terror in favor of pushing hysteria about right-wing extremism.

A 2012 University of Maryland study funded to the tune of $12 million dollars by the DHS characterized Americans who are “suspicious of centralized federal authority,” and “reverent of individual liberty” as “extreme right-wing” terrorists while glossing over the threat posed by Islamic extremism.

Fears that the National Guard and military are preparing for civil unrest in America have heightened in recent weeks following the announcement that a “realistic” military training exercise called Jade Helm will take place in nine U.S. states this summer. The drill revolves around troops operating “undetected” amongst local populations.

As we reported last month, footage shot during a similar drill in Fort Lauderdale showed military and law enforcement practicing the internment of citizens during martial-law style training.