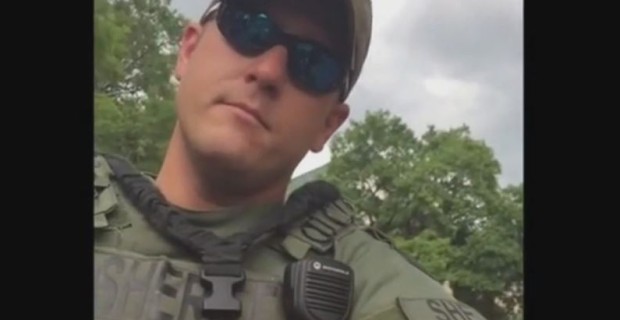 “I didn’t know we were in Iraq” 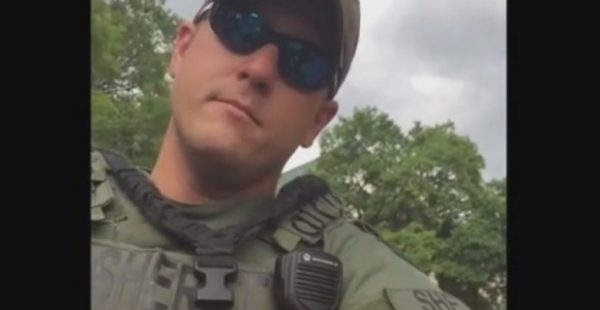 A video out of Gainesville, Florida shows a man being pulled over by camouflage-wearing cops driving an armored vehicle, a disturbing reminder that law enforcement in America is becoming increasingly militarized.

The driver, Lucas Jewell, was pulled over after he performed a rude hand gesture directed at the cops, but the issue is not about whether or not the Jewell should have been harassed for flipping the bird, or whether he was also engaged in a “sexual act” as another officer claimed.

The issue is why are police officers performing routine traffic patrols in armored vehicles that wouldn’t look out of place in occupied Afghanistan?

“I’m really getting pulled over by a tank right now?” Jewell, a Navy veteran, states, to which an Alachua County Sheriff’s Deputy responds “yes sir”.

Jewell refers to a U.S. Court of Appeals ruling which found that a “gesture of insult is not the basis for a reasonable suspicion of a traffic violation or impending criminal activity.”

However, the cop is not interested and instead demands to see the Jewell’s license before making him step out of the vehicle.

The officer then starts to get angry and threatens to arrest Jewell for “resisting” because he is not obeying orders quickly enough.

The cop claims that Jewell performed an “improper hand signal”. Jewell responds by expressing his shock that a “safe community” would need tanks patrolling the streets, stating, “I didn’t know we were in Iraq”.

Another cop then objects to being filmed, claiming that the phone camera could be a firearm, before Jewell is eventually allowed to leave.

“Deputies felt the need to dress up like soldiers because it was Orange and Blue Weekend, a three-day celebration of festivities highlighted by a scrimmage football game between Florida Gator teammates that was free and open to all ages,” reports Carlos Miller.

Concerns about the militarization of U.S. law enforcement have heightened since last year’s unrest in Ferguson, Missouri.

In December, we reported on comments made by a Spokane Sheriff’s Deputy defending the use of an MRAP armored vehicle by saying it was needed to deal with the threat posed by “constitutionalists”.

“I mean, we’ve got a lot of constitutionalists and a lot of people that stockpile weapons, lots of ammunition, they have weapons here locally,” the officer said.

During a New Hampshire city council meeting in 2013, former Marine Corps Colonel Peter Martino, who was stationed in Fallujah and trained Iraqi soldiers, asserted that the Department of Homeland Security was working with law enforcement to build a “domestic army,” because the federal government is afraid of its own citizens. Martino was responding to the city’s Police Chief, who justified the necessity for the acquisition of an armored ‘Bearcat’ vehicle by citing the “threat” posed by libertarians, sovereign citizen adherents, and Occupy activists in the region.

As we have exhaustively documented, the use of armored vehicles is just one sign of how law enforcement authorities are gearing up to deal with civil unrest in America.