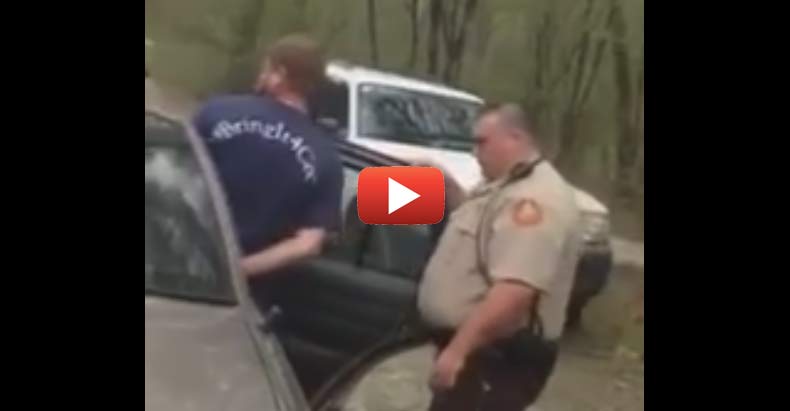 White County, GA– Two high school students were tragically killed last month after 18-year-old Taylor Swing lost control of his vehicle on a curve. The high school student’s car then careened over the edge of a bridge.  Swing, as well as his passenger, 16-year-old Cecily Hamilton, both drowned after the vehicle landed in the creek below.

There are currently barricades along the length of the bridge, but none at the entrance after the curve.  Had there been barricades, Hamilton’s father believes that the teenagers may still be alive today.

Since this tragic accident, the father of 16-year-old Cecily, Shannon Hamilton, has been attempting to get the county to construct barricades to prevent any more lives being lost. Unsatisfied with the county seeming to blow off the issue, the grieving father decided to take matters into his own hands to make his community a safer place.  Hamilton began constructing temporary safety features himself using materials donated by neighbors.

Sadly, Hamilton was arrested for interference with government property, but his proud son took to Facebook to share a video and express his support and love for his father.

“My dad, Shannon Hamilton, was arrested today for attempting to put up temporary barricades on the gene nix Rd. Bridge. White county wants to take their time in getting this accomplished so my dad did it for them. Unfortunately, White county wasn’t going to allow him. It’s a shame that because someone is concerned about the safety of others after losing his daughter that the law can arrest them. This video is what’s going to be the change to all this. I love you dad, you’re doing a great thing and I’m so proud of you! BRING IT FOR CEC EVERYONE! Spread the word about this video and let’s get it viral!” The Facebook post read.

The number one replies from people who are asked the question, “Why do we need government?” is “Who would build the roads, without government?” and “We need police to keep order.”

If ever there was a telling sign that these assertions of needing government to provide roads and police are solely based in fantasy, this video shows it. Irony anyone?