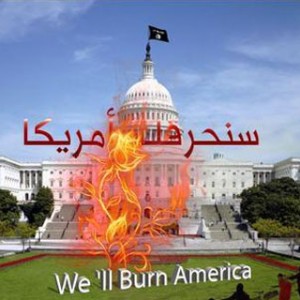 ISIS camps have now been discovered directly across the U.S. border with Mexico, ISIS operatives have been captured illegally entering the United States, and ISIS is threatening to conduct a massive campaign of terror against U.S. targets, and yet Barack Obama and his underlings continue to insist that “right-wing extremists” are the greatest terror threat that this nation is facing.  One recent survey found that 84 percent of all Americans believe that ISIS is a “direct threat to the USA”, but Obama refuses to secure our borders and he is even allowing dozens of American citizens that fought for ISIS overseas to come back into this country.  What in the world is Obama thinking?  Even though ISIS has promised to drown all of us in our own blood, the Obama administration has purged virtually all references to Islam out of government terror training materials.  Meanwhile, as you will see below, Obama’s political enemies have been regularly labeled as “potential terrorists” in official government documents during the Obama era.  This includes “patriots”, “conspiracy theorists”, “evangelical Christians” and “general right-wing extremists”.

This week, we learned that it has been confirmed that ISIS cells are operating in northern Mexico just a few miles from U.S. territory.  The following is an excerpt from a bombshell report that Judicial Watch just released…

ISIS is operating a camp just a few miles from El Paso, Texas, according to Judicial Watch sources that include a Mexican Army field grade officer and a Mexican Federal Police Inspector.

The exact location where the terrorist group has established its base is around eight miles from the U.S. border in an area known as “Anapra” situated just west of Ciudad Juárez in the Mexican state of Chihuahua. Another ISIS cell to the west of Ciudad Juárez, in Puerto Palomas, targets the New Mexico towns of Columbus and Deming for easy access to the United States, the same knowledgeable sources confirm.

The warning follows reports from Judicial Watch in recent months that Islamic terrorists have been captured in Texas after coming across the U.S. border from Mexico.

The organization said just last winter its sources within the Department of Homeland Security said several ISIS terror group members were arrested by federal authorities and the Texas Department of Public Safety in McAllen and Pharr.

Considering how porous our border security is at this point, how many more members of ISIS have been able to come across without getting caught?

And none of this should be catching anyone by surprise.  There have been warnings since the middle of last year that ISIS would be attempting to cross the southern border and attack targets inside the United States.  The following comes from a recent article by Kurt Nimmo…

Judicial Watch said in August ISIS was using Juárez as a staging area and planned to launch a car bomb attack against Fort Bliss, a U.S. Army base about fifteen minutes from the border.

In September, Infowars reporter Joe Biggs. traveled to the area andcrossed the Rio Grande dressed in an ISIS terrorist outfit. The stunt demonstrated how easy it would be for terrorists to enter the country.

But some members of ISIS don’t even have to try to come into the U.S. illegally.

If you can believe it, the Obama administration is actually welcoming back home many Americans that went overseas to fight for ISIS.  Just check out what Homeland Security Secretary Jeh Johnson recently told 60 Minutes…

It was in a televised chat with Lesley Stahl of “60 Minutes” that he admitted there may not be as much oversight of those who trained and fought with terrorists as some people would like.

Stahl asked: “As I understand it, of the 180 Americans who have gone overseas to fight in Iraq and Syria, 40 have come back. I assume you’re keeping close tabs on those 40?”

Said Johnson: “We have, in fact, kept close tabs on those who we believe have left and those who’ve come back. A number have been arrested or investigated, and we have systems in place to track these individuals.

“But you can’t know everything.”

All of this is happening despite the fact that ISIS is threatening a massive wave of terror attacks inside this country.

They even have a hashtag on Twitter for this campaign.  It is “#WeWillBurnUSAgain”, and it has already been used more than 15,000 times.

“America thinks it’s safe because of the geographical location,” its voiceover says. “Thus you see it invades Muslim lands, and thinks that the army of jihad won’t reach in their lands.

“But the dream of Americans to have safety became a mirage.”

If I was in the White House, I would be inclined to take this sort of thing quite seriously.

But instead, the Obama administration continues to be obsessed with the “threat” from “right-wing extremists”.  For example, a recent National Guard exercise featured role players that posed as “sovereign citizens” and chanted right-wing rhetoric…

The exercise, which Infowars reporters were barred from attending, took place in Richmond this past weekend and involved more than 200 soldiers, airmen, local law enforcement and firefighting personnel.

“Why in the course of a drill for a dirty bomb, would an actor claim to be a sovereign citizen?” asks Keith Johnson, who filmed the footage. “The San Francisco Bay Area is not known for it’s sovereign citizen militia population and hearing this shouted during a mock terrorist scenario was disturbing. Anybody familiar with Richmond will tell you it is not a rural ‘militia’ environment. Located in the East Bay Area near Oakland, it is a community with reduced circumstances. No one there is going to be proclaiming to be a sovereign citizen.”

And of course this is far from an isolated incident.

Since Barack Obama entered the White House, Obama’s enemies have been identified as “potential terrorists” in official government documents over and over and over.  This is something that I documented in a previous article entitled “72 Types Of Americans That Are Considered ‘Potential Terrorists’ In Official Government Documents“.  The list below is from that article.  If you would like to see the original document for each point, just click on the link.  And as you read this list over, ask yourself how many of these characteristics apply to you…

With each passing day, the potential threat posed by ISIS increases, and yet Obama remains fixated on “right-wing extremists”.

What is the future of this country going to look like if we continue to get this type of “leadership” from the White House?