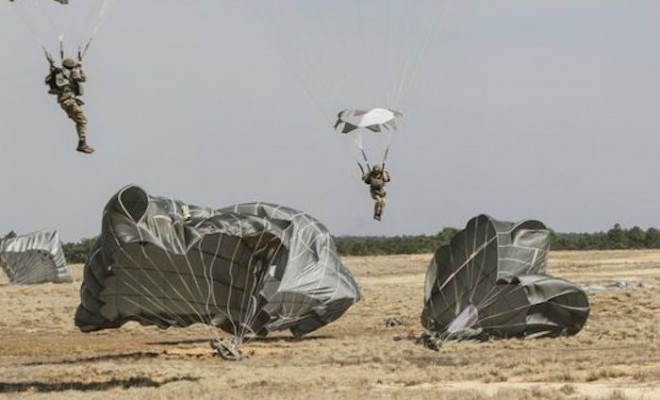 FORT BRAGG, NC (INTELLIHUB) — Foreign paratroopers from Britain are currently training with U.S. troops from the 82nd Airborne Division at Fort Bragg for what is being sold to the general public as a Combined Joint Operational Access Exercise dubbed CJOAX, the largest exercise of it’s like in 20 years.

Like a scene out of the Hollywood blockbuster movie Red Dawn, the multinational training session, which includes over 2100 personnel, is based on “short deployment” tactics (martial law-style deployment) and will continue to run through April 20th, paralleling training with the “3rd Special Forces Group and 2nd Marine Division at Camp Lejeune” in California, according to the Fay Observer.

During COJAX thousands of troops are dropped from various aircraft with heavy supply reinforcement over the duration of a few hours with night drops being the focus.

Monday things went wrong for some participants as approximately 50 paratroopers were taken to the hospital after sustaining various jump related injuries.

“A spokesperson for the 82nd Airborne Division said the injured paratroopers were part of a group of about 2,100, doing combat jumps with at least 100 pounds of gear on at night.”, reported WECT 6.

Brigade Commander Col. Joseph Ryan, also taking part in the exercise, noted that “future battlefields are going to be multinational”. And Ryan may be right as it appears that plans are even in the works to include countries such as Italy, Spain, Poland, France, Canada, and the Netherlands in future venues.

But more importantly I was personally informed by a former member of the 82nd that the current COJAX training is highly suspicious further fueling theories in my mind of coming martial law in America as the build-up to Jade Helm 15 continues.