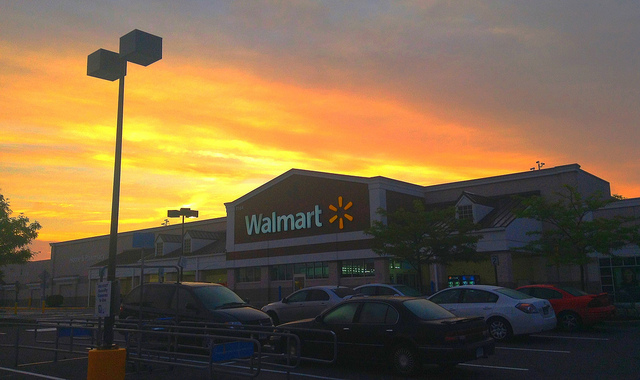 (INTELLIHUB) — At least five Walmart stores throughout the country have announced that they are closing for up to six months due to plumbing issues.

Stores in California, Texas, Florida, and Oklahoma closed Tuesday with little to no warning, in some cases without even letting the city know, leaving thousands of people without jobs (Walmart claims employees can move to another store) and sparking widespread theories as to the real reason for the abrupt closures.

The SGV Tribune in California reported:

Walmart announced Monday that it is temporarily closing its Pico Rivera supercenter on Washington Boulevard due to plumbing problems but City Manager Rene Bobadilla said a union official told him that all 530 employees have been laid off.

James Enriquez, the city’s public works director, said officials have not been notified of plumbing issues at the store. The company would be required to pull permits before undertaking extensive work.

“If I were a property owner I’d want to make sure my store was closed as little as possible,” Enriquez said. “I would want a permit to be in place the day I was going to close — but we haven’t received anything.”

An article in the Tampa Bay Tribune included a vague statement from Walmart that has already been disputed by local shoppers and contractors that have worked at Wal-Mart stores in the past.

Company officials would not describe the issue with the plumbing, but Wal-Mart spokeswoman Amanda Hennenberg issued a statement, saying:

“We will immediately begin the process to address these issues and intend to reopen the store as soon as all of the plumbing issues are resolved. Deciding to close a store is not a decision we make lightly, but after careful consideration, we felt it was necessary to make these repairs so we can better serve our customers and the community in the long run.”

Wal-Mart officials said the problem cropped up with clogs and leaks in plumbing that affected availability of water and drainage around the store.

Employees who work at the Brandon site can seek a transfer to another store if a similar job opening is available. Otherwise, they will be paid for 60 days of work, in accordance with state labor laws.

As noted in an Infowars.com article, an electrician who has done work in Walmart stores in the past questioned the vague reasons given by management for the closures.

“I’m an electrician and I used to work for a company that did repairs at Walmart’s, they make the contractors jump through hoops so they do not have to shut down or cause any inconvenience.”

“If it really was a plumbing issue, they would build completely new restrooms first then repair any issue afterwards. Also, knowing Walmart’s timelines, there is no way in hell any contractors would have 6 months to complete any repair project.”

Another comment posted in response to an article about the Walmart closure in Livingston, Texas disputed the reasoning for the closing. (Quote slightly edited for clarity)

“The thing that really makes no sense is corporate spent all that money putting in gas pumps and there going to close it down. Bentonville is not going to take that kind of loss.”

Reasons for the closures include Walmart’s official reason, major building code violations, and decontamination of radioactive food from Fukushima. Although some in alternative media have brushed aside possible connections to Jade Helm and martial law, the random closing of multiple massive stores at the same time as the run up to Jade Helm deserves, at the very least, closer examination.

The closures may end up being nothing more than simple plumbing issues but when you consider FEMA’s past statements and documented plans to use large, empty department stores as holding centers in the event of widespread social unrest or a massive influx of immigrants, they take on a more sinister meaning.

In a report published in July 2014 on Intellihub.com, Shepard Ambellas outlined a plan by the Department of Defense and FEMA to use, “abandoned or unused department stores, shopping malls and warehouses as camps to accommodate the mass human influx from South America.”

The guidelines include being “Within 50 miles of major city (Pop ~200K)/airport; available for lease; able to be fenced or have adequate security.” Showers and toilets are preferable, according to the guidelines, but not necessary—so long as there is outdoor space for “staging areas for shower/restroom/laundry/kitchen trailers, etc.”

Also preferred but not necessary, according to the email, is a kitchen, a cafeteria, recreational space, and classroom space. Suggestions for potentially workable locations? “Office space, warehouse, big box store, shopping mall with interior concourse, event venues, hotel or dorms, aircraft hangers”—provided that they are vacant and able to be leased.

Since the failures of Hurricane Katrina, faith in FEMA to adequately respond to large-scale crisis situations has remained shaky at best. These pleas for empty big box stores do not restore much confidence.

Although FEMA has used a massive influx of immigrants as the reason for needing detention centers, their power to control the entire country in the event of a martial law scenario could easily lead them to use the centers for American citizens.

Shepard also dug up a 2008 thread on the conspiracy website Above Top Secret that noted how Walmart had received at least 1 billion in government subsidies.

I started thinking the other day about the theories out there about the government building detention centers to hold citizens who might cause trouble when martial law is declared.

I then remembered seeing something about Wal-Mart closing down stores. I started to search around and have decided that there might be a possibility that these ideas are tied together. These are old figures but should be enough to get the discussion going.

CNN Money back on May 24, 2004 had an article about a watchdog group reporting Wal-Mart had received about 1 Billion dollars in government subsidies to expand their business, building stores, buying property and such.

That is a decent amount of money that Wal-Mart is getting to increase the number of stores across the country.

Wal-Mart also has a habit of closing down stores and then building new stores in other cities and towns. They still own these closed stores and usually put them up for lease or sale but very few actually get leased or sold because they are too big and cost too much for most businesses to use.

On average as of March 2005 Wal-Mart had about 350 empty stores across the U.S with a combined total area of about 26.7 million sq ft.

The fact that Wal-Mart has worked hand in hand with the Department of Homeland Security in the past is what lead many to question the store closings in the first place. This history includes the infamous see something say something campaign launched by the former Homeland Security secretary known affectionately as “Big Sis.”

DHS AND WALMART: PARTNERS IN PROMOTING “IF YOU SEE SOMETHING, SAY SOMETHING” CAMPAIGN

In December 2010, then Homeland Security Secretary Janet Napolitano made waves with her announcement of a partnership between DHS and Walmart. Comparing the announcement to 1984, many saw this as one of the largest retailers in the country joining with the government to promote spying on your neighbors.

A press release praising the partnership detailed how a DHS produced video would now play at the checkout lines of over 200 stores.

Secretary Napolitano has teamed up with the nation’s largest retailer, Walmart, to promote the “If You See Something, Say Something” campaign.

Beginning today, more than 230 Walmart stores will play this video at select checkout lanes. In the coming weeks, a total of 588 stores will show the video featuring Secretary Napolitano reminding shoppers to contact local law enforcement to report suspicious activity.

“Homeland security starts with hometown security, and each of us plays a critical role in keeping our country and communities safe” the Secretary said today, adding “I applaud Walmart for joining the ‘If You See Something, Say Something’ campaign. This partnership will help millions of shoppers across the nation identify and report indicators of terrorism, crime and other threats to law enforcement authorities.”

The “If You See Something, Say Something” campaign is our way of engaging and empowering the public and key front line employees to take an active role in identifying and reporting indicators of terrorism, crime, and threats.

As the busy holiday shopping season ramps up, this video will serve as a dynamic way to encourage the public to remain vigilant and play an active role in keeping our country safe.

Although clearly Walmart has been willing to work closely with the government in the past and FEMA absolutely does have the executive power to take over any store they want, many will undoubtedly consider this mere conspiracy theory or fear mongering due to lack of direct evidence. But is asking questions and putting together connections really a bad thing?

The planned use of large shopping centers as well as sports stadiums to house immigrants or citizens during a major crisis has a long, documented history. The only question that remains now is when or if their planned use will become a reality.