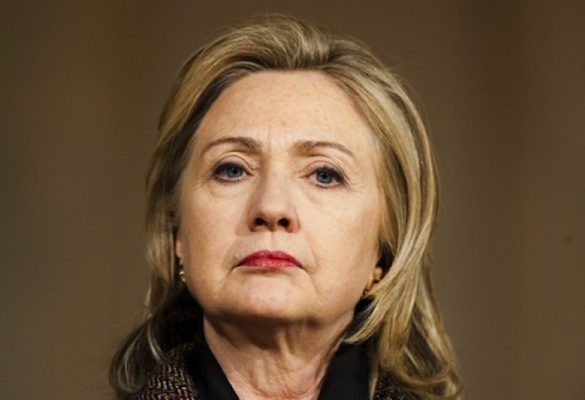 I left off on the last article with how Hillary Rodham Clinton wants a revolutionary change and the building of a new society founded on Marxist principles. Hillary Rodham Clinton is an evil individual who has been taught that the United States has to change to a more Socialistic/Marxist way. She was against the Vietnam War and led protests against it, showing her disregard for the military and what they were doing to try and hold Communism at bay in Vietnam. That did not matter to Hillary at all; her ideas were more like Stalin and Hitler than any of our ideas of the United States.

Hillary served as one of nine editors of the Yale Review of Law and Social Action, where she worked collaboratively with Mickey Kantor (who, more than two decades later, would serve as U.S. Trade Representative and U.S. Commerce Secretary under President Bill Clinton) and Robert Reich (who would serve as Bill Clinton’s Labor Secretary from 1993 to 1997). “For too long,” said the Yale Review, “legal issues have been defined and discussed in terms of academic doctrine rather than strategies for social change.” The publication was replete with articles by or about such radicals as William Kunstler, Charles Reich (author of The Greening of America); Jerry Rubin (who wrote a piece exhorting parents to “get high with our seven-year-olds,” and urging students to “kill our parents”); and Charles Garry (the civil rights attorney who defended Black Panther Party members accused of murder). The Fall and Winter 1970 editions of the Yale Review, on which Hillary worked as associate editor, focused heavily on the trials of Black Panthers who had been charged with murder. Numerous cartoons in those issues depicted police officers as hominid pigs.[3]

Hillary Rodham Clinton had a Yale professor named Thomas Emerson (known as “Tommy the Commie”), who introduced her to Charles Gary, and this is where it got really interesting, as she got personally involved with the defense of several Black Panthers who tortured an individual with boiling water, mutilated one of their own members, and committed other horrendous acts.

Though evidence of the defendants’ guilt was overwhelming, Hillary — as part of her coursework for Professor Emerson — attended the Panther trials and arranged for shifts of fellow students to likewise monitor court proceedings and report on any civil-rights abuses allegedly suffered by the defendants. (Those abuses could then be used, if the Panthers were to lose their case, as grounds for appeal.) Striving to neutralize what she considered the pervasive racism of the American legal system, “Hillary was,” as Barbara Olson observed in Hell to Pay, “a budding Leninist.”

Hillary left college being described as a budding Leninist, her ideology in line with the Communist party. Why would the United Sates want to have Hillary Rodham Clinton as the President of the United States when, according to her learning, the United States had to change from a free society into a Marxist or Communist society?

But it does get worse—much worse. As Hillary Rodham Clinton moved on through her college days, she became more aligned with the ideology that the United States was not good for her ideas or those of her mentors, one of whom she held a high regard (Saul Alinsky).

To show how much she despised the United States involvement in the Vietnam War, Hillary Rodham Clinton did the following:

In 1970, Hillary chaired a meeting where Yale Law School students voted in favor of joining a national strike against the Vietnam War.

Hillary Rodham Clinton would not feel very favorable towards the Vietnam veterans, and would not make a good commander in chief with this type of background. She also made sure some Veterans would be able to file as conscientious objectors. Hillary Rodham Clinton did this while working for the communist law firm to show where her heart really was.

Also in 1972, she went to Berkeley to work as an intern at her hand-picked law firm: Treuhaft, Walker, and Bernstein. Founded by current or former members of the Communist Party USA, this firm had long acted as a legal asset not only for the CPUSA but also for the Black Panthers and other Bay-area radicals. Founding partner Bob Treuhaft, head of the California Communist Party, had been labeled one of the nation’s most dangerously subversive lawyers. According to historian Stephen Schwartz, “Treuhaft is a man who dedicated his entire legal career to advancing the agenda of the Soviet Communist Party and the KGB.” Hillary did yeoman’s work while learning at the feet of Treuhaft and his fellow masters. Associates say that Hillary, during her tenure with the firm, helped draftees get themselves declared conscientious objectors so they could avoid serving in Vietnam; they also contend that Hillary served VA interns seeking to avoid taking a loyalty oath to the United States.

Also in the early 1970s, Hillary developed a close acquaintanceship with Robert Borosage, who would later become a major figure in such leftist organizations as the Institute for Policy Studies (IPS), the Campaign for America’s Future, and Institute for America’s Future. Hillary herself (along with Bill Clinton) would go on to develop close political ties with IPS; moreover, she would give that organization a great deal of money to further its cause.

Hillary Rodham Clinton did, in fact, get involved with some of the most left leaning groups out there, some even being considered as Communist front groups. In the 1970s, she began spreading her ideas that women, children, and minorities were being shunned by a white male-driven society.

Viewing America as an authoritarian, patriarchal, male-dominated society that tended to oppress women, children, and minorities, Hillary wrote a November 1973 article for the Harvard Educational Review advocating the liberation of children from “the empire of the father.” She claimed that the traditional nuclear family structure often undermined the best interests of children, who “consequently need social institutions specifically designed to safeguard their position.” “Along with the family,” she elaborated, “past and present examples of such arrangements include marriage, slavery, and the Indian Reservation system.” She added: “Decisions about motherhood and abortion, schooling, cosmetic surgery, treatment of venereal disease, or employment, and others where the decision or lack of one will significantly affect a child’s future should not be made unilaterally by parents.”

In today’s society, what Hillary Rodham Clinton stated back in 1973 seems like exactly what she states today. She calls for, “the liberation of children from the empire of the father.” Maybe this is why our families are falling apart today—because ideas like those of Hillary Rodham Clinton wish to demean the father figure in the home and make him seem like a ruling king? Hillary Rodham Clinton sounded like a pure Communist back then, and it would not seem too unrealistic to think she harbors those same ideas today.

But Hillary Rodham Clinton has not come to be on her own—she has had a lot of help and, in some cases, questionable placements to high positions. Take, for instance, her 1976 time when she got moved up the ladder only due to her then husband, Bill Clinton.

In 1976 Mrs. Clinton worked for Jimmy Carter‘s successful presidential campaign. Soon thereafter, she found employment as an attorney with the Rose Law Firm in Little Rock, Arkansas, where she would continue to work until 1992. According to political analyst and former Clinton advisor Dick Morris, “She [Hillary] had no job offers in Arkansas and only got hired by the University of Arkansas Law School at Fayetteville because Bill was already teaching there. She only joined the prestigious Rose Law Firm after Bill became Attorney General, and made partner only after he was elected governor.”

In the next article I will show a lot more of Hillary Rodham Clinton’s past and how it came to be under some very interesting circumstances. I may feature a 4th article to show her dealings with the many scandals surrounding her.