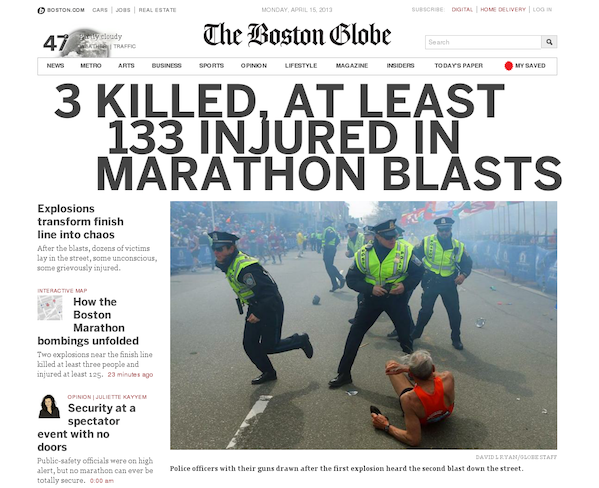 (Two years ago the Boston Marathon bombing event occurred. Major media still maintain that at least 260 individuals suffered injuries as a result of the incident, most recently as the implied rationale behind the curious prosecution and conviction of Dzhokhar Tsarnaev for the crime. This article originally appeared on May 11, 2013. Additional research and analysis of the Boston bombing is available here.-JFT)

Exactly how many people were injured as a result of the April 15 Boston Marathon Bombing (BMB)? An official tally from the Boston Public Health Commission puts the number at an incredible 282 injured and four killed, including MIT police officer Sean Collier. “Only two patients wounded in the Boston Marathon bombings remained in critical condition” on April 22, the Boston Globe reported, “but the count of injured people who were treated in area hospitals has risen sharply to 282, according to the Boston Public Health Commission. That is far higher than the initial estimate of 170.”

According to the Globe,

The number rose because dozens of victims delayed seeking medical care for minor wounds or symptoms that they thought would go away on their own, said Nick Martin, a spokesman for the health commission. He said the latest data … show patients were seen at 27 hospitals in Greater Boston.

The threshold for allegedly having sustained a bomb-related injury is not high.

“One of the best examples is hearing issues,” Martin said. “People might have first thought their hearing problems would be temporary.” Instead, hearing loss or continuous ringing or buzzing in their ears remained. Others sought delayed care for minor shrapnel wounds.[1]

On the same day Reuters reported 264 people injured.[2] Each of the exorbitant figures trumpeted by these organs differs sharply with the tallies provided by the New York Times-owned Boston Globe and listed on the popular Globe-owned website Boston.com. Here one finds only 55 victims out of the purported 268 (Reuters) or 286 (City of Boston and Boston Globe) injured and deceased.

“This is a list of confirmed deceased and injured victims of the Marathon explosions and their aftermath,” the website reads.

“We will continue to update this list. If you have some information, please click here … If you would like to donate to the victims of the Boston Marathon bombings, please visit onefundboston.org.

The 55 victims listed on Boston.com are categorized below by name, age, hometown, injury description, and the news source where initial reportage of their injuries or deaths appeared.[3]

As indicated in the above table, The Boston Globe and Boston.com are responsible for the initial and in many cases only reportage on 37 of the 55 victims, with Boston.com otherwise referring readers to either Boston College’s website, eight local or regional newspapers’ sites, and in one instance a donation page, for information on the remaining 18 injured.

The 231 added to the overall City of Boston count of April 23 appear to be phantom victims who might have sought care for modest injuries in the week following the incident but for which no records have been made publicly available. Even Boston.com’s list of 55 has numerous informational gaps. For example, eleven of the 55 have no age recorded, an especially glaring oversight for medical authorities administering care, while five have no injury listed.

Boston.com provides an online form for victims to submit a description of their injuries and the hospital where they are being treated. When I contacted Boston Globe newsroom via telephone on May 11, 2013 to clarify why the injury list had not been updated in accord with the City of Boston’s figures, or whether entire names and injury descriptions might still remain unpublished, a reporter identifying herself as Mary Covlu [4] responded that the website “is just for people with serious injuries.” When I inquired whether “temporary hearing loss,” listed as the medical condition of 32-year old Nicholas Yanni of Boston could be considered a “serious injury,” the reporter expressed astonishment and could not respond.

Repeated email inquiries by Memory Hole to Boston Globe’s chief and associate editors asking whether the newspapers have obtained autopsies or death certificates for the four decedents remain unanswered.

If temporary hearing loss can indeed be counted as a demonstrable injury and the figures provided by Boston’s Commission on Public Health are comprised primarily of those complaining of such minor problems, then roughly eighty percent of the BMB-related injuries might be negligible.

The 248/286 figures stand in even greater contrast with the original injury count in the immediate wake of the BMB, which was reported as a much less sensational 23 injured and two deaths—figures in rough accord with the number of individuals whose images were recorded on CCTV and surveillance cameras involved in and around the initial blast that exhibited ostensible injuries.

This estimate of injured also conforms with arguably excessive eyewitness accounts, such as those of Roupen Bastajian, an off-duty Rhode Island State Trooper who told the Associated Press that he just completed the race when he heard the first detonation. “I started running toward the blast. And there were people all over the floor,” Bastajian recalls. “We started grabbing tourniquets and started tying legs. A lot of people amputated. … At least 25 to 30 people have at least one leg missing, or an ankle missing, or two legs missing.”

Early reports lend further credence to the event’s drill-like qualities, with acknowledgment from “a senior U.S. intelligence official” who said “on condition of anonymity” that “two other explosive devices found nearby were being dismantled.” According to the AP,

A third explosion was heard about an hour after the first two after authorities warned spectators to expect a loud noise from a water cannon that police apparently were using to destroy one of the devices.[5]

This account closely conforms with reports in alternative media outlets that drills were being carried out around the Marathon.

In sum, the photos, videos, stories and figures comprising the mediated BMB do not add up and suggest elements of a manufactured event. The inflated injury count provided by the City of Boston is not readily supported by existing visual documentation of the two bombings, where at most several dozen individuals may have been seriously impacted. Nor are the calculations supported by the information made publicly available through the primary news outlet reporting on the event.

The Boston Globe has played an inordinately powerful and arguably suspect role in framing the BMB narrative. The outlet’s distribution of information concerning victims—information that remains inconsistent or sorely lacking in important details–clearly diverges from the dubious and unusually high “official” casualty counts so heavily propagated in corporate media.

[4] In a May 14 blog post, “FAU’s James Tracy’s Mistakenly Yells at Boston GlobeIntern,” a New Times writer rightly notes that the Boston Globe employee’s name is Mary Pavlu, yet erroneously posits that Pavlu is an intern. At the conclusion of my May 11 early afternoon conversation, correctly recounted above, I asked for the spelling of Pavlu’s name and repeated the spelling of the last name to her–c-o-v-l-u–which she confirmed before we concluded our conversation. Pavlu identified herself as a Boston Globe reporter at the outset of our conversation and again midway through. Indeed, Pavlu’s Twitter profiles, @GlobeMaryPavlu, and@MaryPavlu both indicate that she is a Globe reporter, as do numerous Globestories with Pavlu’s byline and job description.-JFT, 5-17-13.