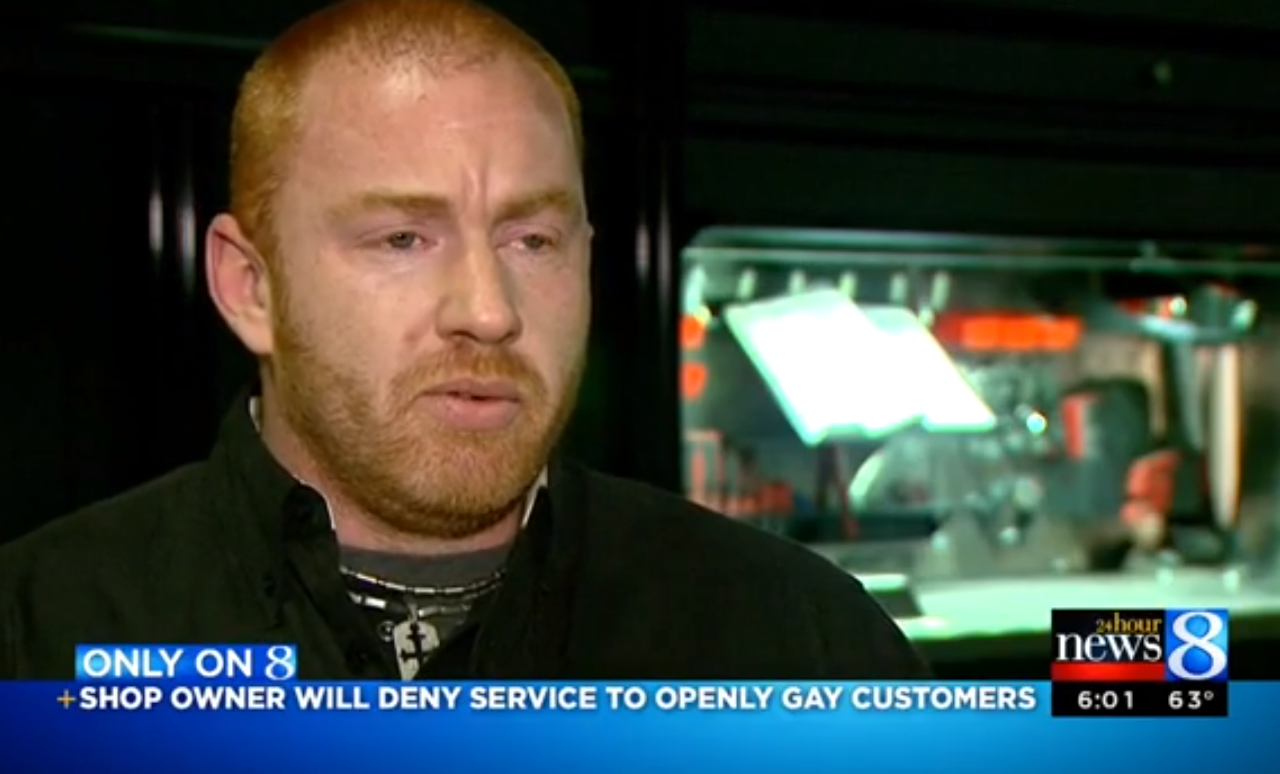 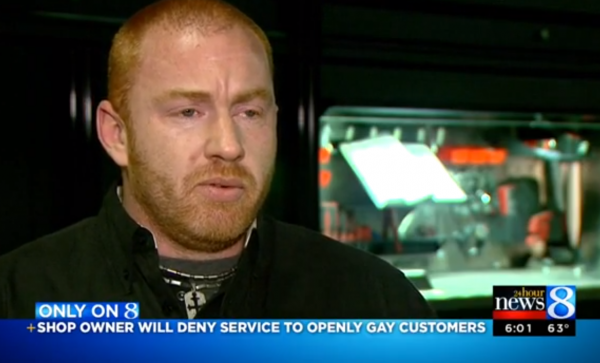 People are getting fed up in America with the growing tyranny both at the local, state and federal levels. While many Christians in America have resigned themselves to basically waiting on some unbiblical rapture scenario to pull them from God’s judgment upon a godless culture that they are unwilling to engage, some are not content to let the world go to Hell in a handbasket. Instead, they are ready and willing to stand for the Word of God in both words and deeds. Enter American Christian mechanic Brian Klawiter.

“There’s a set of behavior rules in my place of business,” said Brian Klawiter, owner of Dieseltec in Michigan. “I operate my life on Christian values and for me not to take that into my business, I think, would be hypocritical.”

Our rights as conservative Americans are being squashed more and more everyday. Apparently if you are white (or close to it), you have a job, go to church, and own a gun… That translates into racists, privileged, bigot, conspiracy theorist. Too many of us say nothing. Well, freedom of speech isn’t just for Liberals, THEY are the ones that need to learn to “co-exist”, THEY are the ones who need to WORK to be “equal”

Therefore, in the spirit of freedom (whats [sic] left of it) and MY right to operate MY business as I see fit:

Guns ARE allowed at DIESELTEC, so much so in fact that we will offer a discount if you bring in your gun. (“On duty” cops are excluded because thats not their gun, that’s [sic] my gun bought with my money, off duty absolutely!)

I am a Christian. My company will be run in a way that reflects that. Dishonesty, thievery, immoral behavior, etc. will not be welcomed at MY place of business. (I would not hesitate to refuse service to an openly gay person or persons. Homosexuality is wrong, period. If you want to argue this fact with me then I will put your vehicle together with all bolts and no nuts and you can see how that works.)

We, as a team, work hard for whats [sic] ours. We are not protected by unions or contracts. We absolutely MUST provide our customers with a service level that would make them come back or tell their friends about us. We don’t have a “right”, and we are not “entitled” to our pay. We must EARN it.

I am not racists, you are for assuming I am, however, I am really quick to judge… if it acts like a duck, and quacks like a duck…

It IS a free country and I support your right to your opinion, that being said, if you don’t like what I have to say I reserve that same right to tell you to go cry to your momma (cause your daddy would probably smack ya’, better yet, yes, go tell your dad.)

Of course, the sodomites and their “useful idiot” supporters (some even attempting to refer to themselves as “Christians“) went on the attack. Just look at the comments of this video report by USA Today.

Though the real haters, those that pull your hair and slap your face and cry victim (ie. The sodomites and their supporters), issued comments full of hate, Klawiter pointed out that his comments about sodomy were one of many immoral behaviors he listed.

“I did choose homosexuality as an example when I spoke about immoral behavior, but that’s definitely become the hot button issue,” he said. “I did speak about guns. They are welcome in my shop, so much so, that I’ve offered discounts for those that want to carry their weapon into my shop.”

“I spoke about racism,” he added. “Furthermore, on the immoral behavior, I spoke about dishonesty and thievery. These are all things that I talked about that are acceptable and not acceptable in my place of business.”

There was the minority voice of those who live immorally in America. However, he did receive over 3,000 likes and over 1,400 shares on Facebook.

“It’s not popular to go against the grain of what you see across the national media,” Klawiter said. “So, it’s an uncomfortable position to be in. But when presented with an opportunity to share my beliefs, I need to stand firm on those.”

He expressed that if people disagreed with his position, they shouldn’t attack him personally, but rather offer him their point of view.

Klawiter has never asked people if they practice sodomy, nor does he plan to do so. However, he does believe his business is, in fact, his business and should be allowed to be run in the manner he sees fit.

Why people can’t understand Brian’s position is beyond me. They would want the same authority to do what they believe, according to their values, in their place of business. But then again, we are dealing with some people who God has turned over to a reprobate mind (Rom. 1:28). The only thing those people will actually hear will be the Gospel of Jesus Christ… and only if God quickens them by His Holy Spirit to do so (Eph. 2:1-10).

We reached out to Brian for further comment, but obviously he is quite busy with his business. However, we did encourage him in his stand and believe every Christian in America, whether they own a business or not need to take a similar stand based upon the teachings of the Bible. May God bless this man and His business!

UPDATE: Brian responded to haters and death threats he has received from those who cry for “tolerance.”

Listen up folks, If you have an opposing view to mine that IS OK, what is NOT OK is threats to kill me, my family, and…