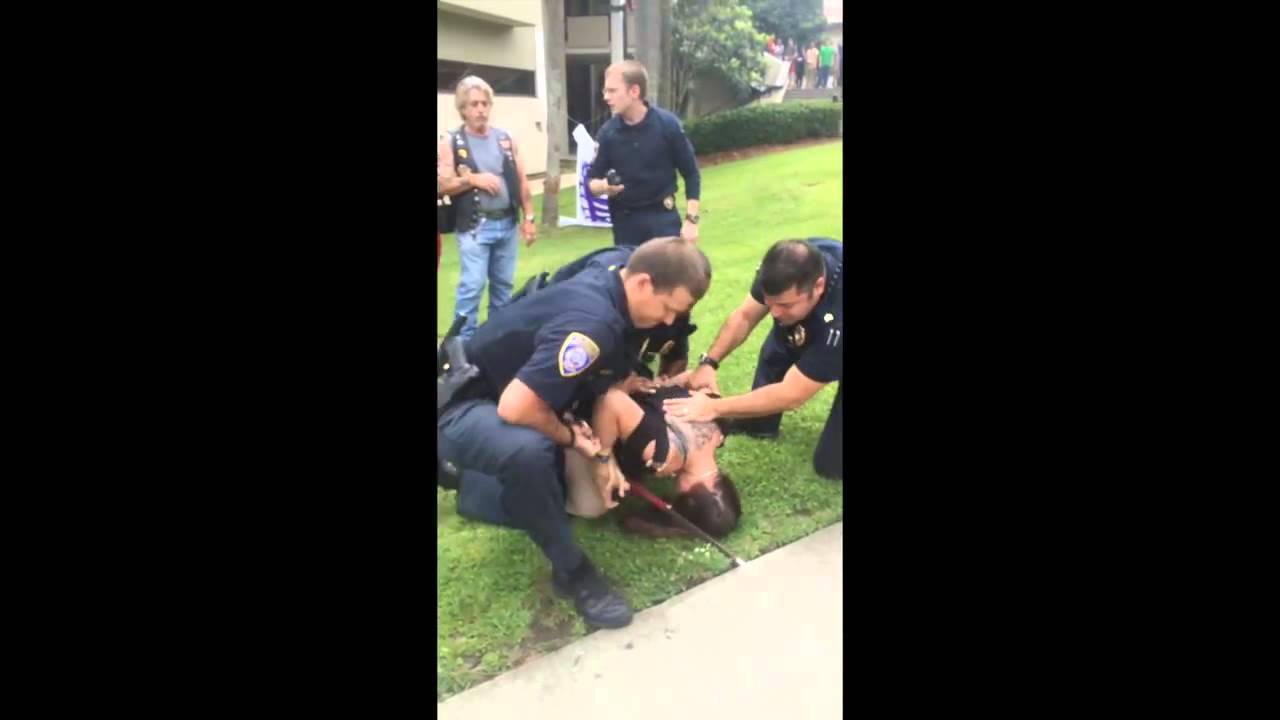 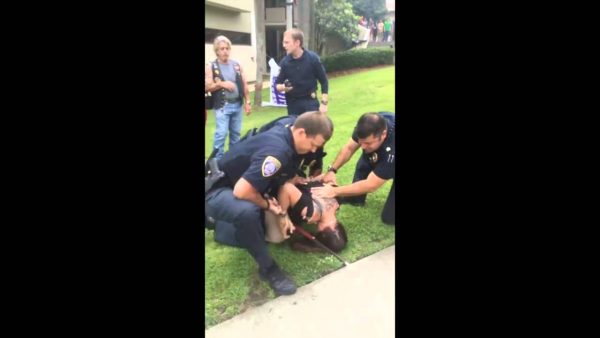 In a valiant display of patriotism, Michelle Manhart picked up an American flag that was being trampled on by a bunch of young university punks. Keep in mind that this had been going on for three days at Valdosta State University. When Michelle stood up and did what the campus and no one else was willing to do, she resisted turning the flag over to police and stood her ground, guarding the flag until she was overpowered by police and arrested.

Michelle told what happened in her Facebook post, which as of the writing of this article had nearly 27,000 shares:

This first picture is what was going on at Valdosta “State” University for 3 days…The campus refused to do anything about it … So we decided to get the flag and give it the respect it deserved…We just wanted to remove it and dispose of it properly…The American flag represents our Freedom why would you want to walk on that??? Please repost as much as possible make this go viral people need to see the truth…I wonder if “Donors” of VSU are ok with this blatant disrespect of the flag.

Manhart is an Air Force veteran, who said that she did not go with the intent to take the flag, but to confront what was taking place.

“I did not want anything like this, but I got a call from a student who told me that the flag was on the ground, and they were walking on it,” said Manhart. “I was just going over there to pick up the flag off the ground. I don’t know what their cause is, but I went to pick it up because it doesn’t deserve to be on the ground.”

Though she was arrested, neither the group nor the officers are pressing charges.

“If your cause is racism then find some white people and walk on them,” she told The Valdosta Daily Times. “But to walk on the flag is walking on our symbol of freedom. You have the freedom to do what you are doing because of it. I’m not fighting against them. I’m fighting against the way they are going about it.”

She hopes the group will issue her a letter of apology and that she will be able to receive the flag and dispose of it properly.

Though the group protesting could not be determined to be VSU students, Andy Clark, vice president for enrollment, marketing and communications, said they were allowed to protest on campus.

From the statements in the video by the demonstrators, they definitely have had some serious brainwashing when it comes to their freedom here in America. They have the mentality of Al Sharpton and Jesse Jackson, a victim mentality.

The Valdosta Daily Times also provide a statement from the Board of Regents regarding the incident.

“We respect the rights of people to peacefully assemble and voice their opinions. Our primary concern is the safety of our students, faculty and staff and our ability to carry out our responsibilities to all our students on campus. We are monitoring the situation.”

Interestingly enough, according to the US Code regarding desecration of the United States Flag, it reads:

(a)(1) Whoever knowingly mutilates, defaces, physically defiles, burns, maintains on the floor or ground, or tramples upon any flag of the United States shall be fined under this title or imprisoned for not more than one year, or both.

(2) This subsection does not prohibit any conduct consisting of the disposal of a flag when it has become worn or soiled.

(c) Nothing in this section shall be construed as indicating an intent on the part of Congress to deprive any State, territory, possession, or the Commonwealth of Puerto Rico of jurisdiction over any offense over which it would have jurisdiction in the absence of this section.

(d)(1) An appeal may be taken directly to the Supreme Court of the United States from any interlocutory or final judgment, decree, or order issued by a United States district court ruling upon the constitutionality of subsection (a).

(2) The Supreme Court shall, if it has not previously ruled on the question, accept jurisdiction over the appeal and advance on the docket and expedite to the greatest extent possible.

1989—Subsec. (a). Pub. L. 101–131, §2(a), amended subsec. (a) generally. Prior to amendment, subsec. (a) read as follows: “Whoever knowingly casts contempt upon any flag of the United States by publicly mutilating, defacing, defiling, burning, or trampling upon it shall be fined not more than $1,000 or imprisoned for not more than one year, or both.”

Apparently, those that were violating the code here were neither fined nor imprisoned. Yet, the one who stood up and sought to protect it from desecration was arrested. Go figure!

We reached out to Mrs. Manhart for comment. As of the writing of this article, she has not responded.

Should you wish to contact the Dean’s Office concerning their allowance of such actions by the group desecrating the flag, here’s their contact information: