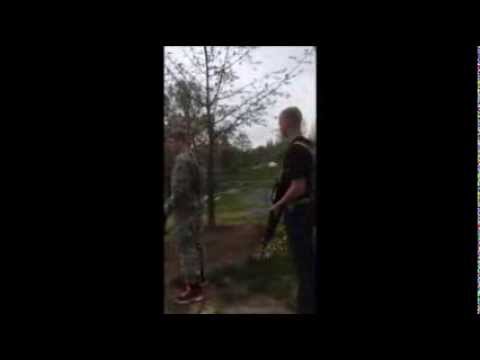 “This was a Sunday morning exercise. They appeared to be heading to carry out PT (physical training) at some other location,” the man who shot the video tells us. “This was in a city park and people were walking, jogging, and enjoying the playground with their children.”

“What struck me were the M1As or M16s they were carrying (whether real or plastic) I could not tell the difference. I drove up as close as possible to them as they turned to my left onto the sidewalk,” he adds.

One of the soldiers confirms that they are part of the 116th Infantry Brigade Combat Team, which is currently assigned to the Virginia Army National Guard and is based out of the Thomas Howie Memorial Armory in Staunton, Virginia. The troops were filmed at Gypsy Hill Park, which is situated next to the Armory.

The Guard troops behave in a friendly manner and are willing to engage in casual conversation, but some have expressed concerns about armed personnel conducting maneuvers in public, suggesting that such activity should be done on base.

Others insist that the activity is perfectly routine and nothing to be worried about.

Last week, we featured a video out of Ontario, California which showed National Guard troops marching down a residential street while chanting military cadence and performing traffic control drills. Some locals claimed that such public drills were not commonplace.

Concerns about military personnel operating in public places are heightened in anticipation of the nationwide Jade Helm military exercise, a drill which will revolve around soldiers operating “undetected amongst civilian populations,” to see if they can infiltrate without being noticed.