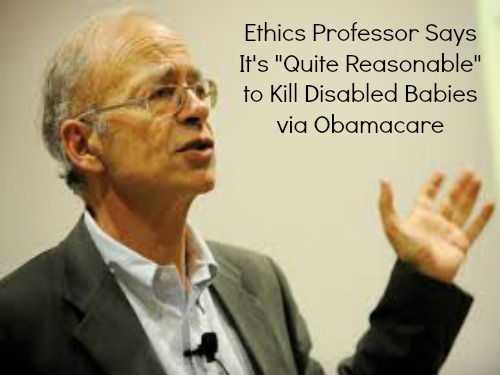 Has anyone else noticed that most professors of ethics aren’t exactly…ummm….ethical? At least the ones who get quoted, anyway.

A professor at the highly esteemed Princeton University doesn’t want his Obamacare premiums to increase because of caring for severely disabled babies. Dr. Pete Singer, who teaches ethics (but perhaps needs a little refresher on what the word “ethics” means) argued during a radio interview on Sunday that America should be more accepting of “intentionally ending the lives of severely disabled infants.”

Ethics:  that branch of philosophy dealing with values relating to human conduct, with respect to the rightness and wrongness of certain actions and to the goodness and badness of the motives and ends of such actions.

Singer, a longtime mouthpiece for eugenicists everywhere, has previously drawn fire for his belief that the right to life is directly related to a person’s intelligence and  ability to feel pleasure and pain, is back in the spotlight.  In 1993, he wrote a treatise called “Practical Ethics: Taking Life: Humans.”

Singer argued for the morality of “non-voluntary euthanasia” for human beings not capable of understanding the choice between life and death, including “severely disabled infants, and people who through accident, illness, or old age have permanently lost the capacity to understand the issue involved.”

For Singer, the wrongness of killing a human being is not based on the fact that the individual is alive and human. Instead, Singer argued it is “characteristics like rationality, autonomy, and self-consciousness that make a difference.” (source)

He clearly hasn’t changed his mind. During the interview he argued that it was “quite reasonable” to ration healthcare for disabled infants:

I think if you had a health-care system in which governments were trying to say, “Look, there are some things that don’t provide enough benefits given the costs of those treatments. And if we didn’t do them we would be able to do a lot more good for other people who have better prospects,” then yes.

Because I think most people, when they think about that, would say that’s quite reasonable. You know, I don’t want my health insurance premiums to be higher so that infants who can experience zero quality of life can have expensive treatments. (source)

Is anyone else chilled by the fact that people like Singer are the ones teaching the next generations about ethical behavior?