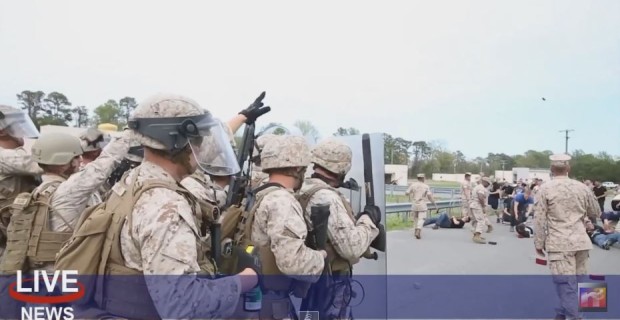 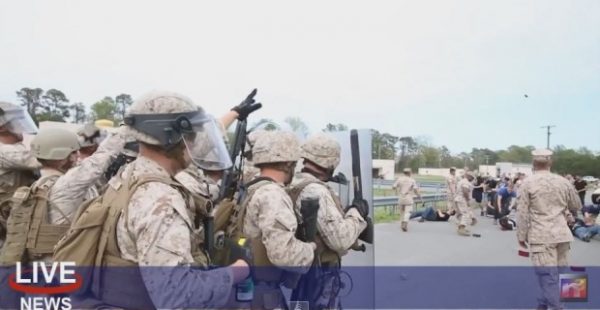 Video footage has emerged of Marines conducting riot control exercises at the Naval Weapons Station in Yorktown, Virginia during which angry protesters are kept at bay by armed troops.

The Marines, “Conducted an operational readiness exercise, which evaluates the team’s ability to perform riot control,” according to a description which accompanies the video. “The ORE determines of the marines are ready to take their final step in pre-deployment training. After completing and meeting the requirements of the ORE evaluation the Marines will go to Quantico, Virginia for their final phase of pre-deployment training.”

However, the video, which shows Marines taking on irate demonstrators with pepper spray, batons and rifles, will only serve to heighten concerns that the U.S. Army and the federal government are preparing for more civil unrest in America in the aftermath of the Ferguson, Missouri riots.

The fact that the training exercise has been presented for the consumption of the American public also raises questions as to its intended purpose.

In anticipation of Jade Helm, a nationwide military exercise set to begin in July during which troops will operate undercover amongst local populations, there have been numerous instances of troops and National Guard conducting martial law-style drills.

As we have exhaustively documented, there is a manifestly provable history of the federal government and the U.S. Army gearing up for domestic disorder, activity that is underpinned by publications such as a leaked 2012 US Army Military Police training manual, entitled “Civil Disturbance Operations,” which described how soldiers would be ordered to confiscate firearms and kill American “dissidents” on U.S. soil.