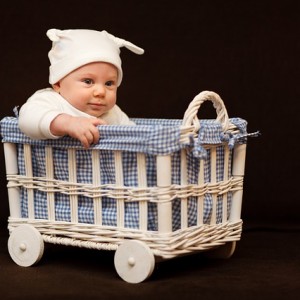 Every single day a tragedy greater than 9/11 takes place, but hardly anyone is talking about it anymore.  On September 11th, 2001 more than 3,000 Americans lost their lives when three giant steel frame skyscrapers were brought down in New York City.  That was a great evil, but so is the fact that we purposely kill more than 3,000 of our own babies every single day in this country.  The fact that society has generally accepted the practice of abortion does not lessen the evil that we have done one bit.  Today, the United States has the highest abortion rate in the entire western world, and hardly anyone makes a fuss about it anymore.  In fact, a lot of Americans laugh about it, and some even do comedy skits about it.  We are so casual about abortion these days that one university is actually recruiting teen girls to have abortions for a “scientific study” that is being conducted.  But someday we will be judged for what we have done.  We have killed more than 56 million of our own babies, and their blood is crying out for justice.  In the end, we will reap what we have sown.  The following are 19 statistics about abortion that every American show know.  Please share these numbers with everyone that you can…

#1 In a massacre that is almost unspeakable, more than 56 million American babies have been murdered in the United States since Roe v. Wade was decided in 1973.

#2 When you total up all forms of abortion, including those caused by the abortion drug RU 486, the grand total comes to more than a million abortions performed in the United States every single year.

#3 The number of American babies killed by abortion each year is roughly equal to the number of U.S. military deaths that have occurred in all of the wars that the United States has ever been involved in combined.

#4 Approximately 3,000 Americans lost their lives as a result of the destruction of the World Trade Center towers on 9/11.  Every single day, more than 3,000 American babies are killed by abortion.

#5 About one-third of all American women will have had an abortion by the age of 45.

#6 Approximately 47 percent of the women that get an abortion each year in the United States have also had a previous abortion.

#7 It has been reported that a staggering 41 percent of all New York City pregnancies end in abortion.

#8 Approximately 78 percent of all abortions in New York City are performed on African-American and Hispanic babies.

#9 According to Pastor Clenard Childress, approximately 52 percent of all African-American pregnancies now end in abortion.

#11 About 18 percent of all abortions in the United States each year are performed on teenagers.

#12 One very shocking study found that 86 percent of all abortions are done for the sake of convenience.

#13 According to the Guttmacher Institute, the average cost of a first trimester abortion at the ten week mark is $451.

#14 Many insurance companies now prefer abortion because the average cost of a vaginal birth with no complications in the United States is now over $9,000.

#18 Planned Parenthood gets more than 400 million dollars from the federal government each year.

#19 Overall, there have been well over a billion abortions performed around the world since 1980.

Every single year, both Democrats and Republicans vote to shower Planned Parenthood with hundreds of millions of dollars.

We are told that this must be done because of all the “good” the organization does.

But the truth is that this has been a despicably evil organization from the very beginning.  The founder of Planned Parenthood, Margaret Sanger, once said the following….

Does that sound “good” to you?

That is an unbelievably evil statement.  And yet this woman is constantly being showered with praise in our public schools, in the lecture halls of our colleges and universities, and even in the halls of the U.S. Congress.

Sometimes it takes a child to show us the foolishness of our ways.  I want to share with you a letter that an 11-year-old girl named Samantha sent to her state legislators.  It is written very simply, but it makes more sense than 95 percent of the stuff that is written about abortion by adults… 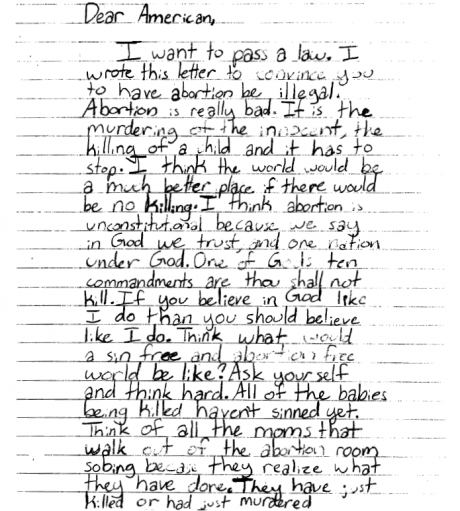 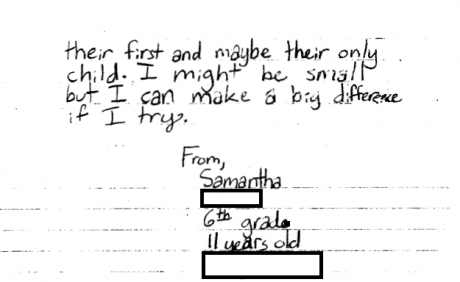 But you know what?

For writing such a letter, there is a good chance that Samantha will be labeled as a “potential terrorist”.

Yes, this is actually true.  A Department of Homeland Security report that was released in January 2012 states that anyone that is “anti-abortion” is a potential terrorist.  And since that time, there have been other government reports that have also identified “anti-abortion” protesters as potential threats to national security.

But despite all of the posturing and all of the rhetoric, everyone knows deep down that an abortion kills a living human being.

Even Barack Obama knows this.  Just consider a comment that he made during one recent speech…

“Too many women face unnecessary difficulties on the job, like the difficulty of being paid less than a man for doing the same work,” said Obama. “That’s a difficulty. Or being reprimanded or fired for taking too many bathroom breaks when you’re pregnant. Clearly that’s a man making that decision because they don’t have five pounds of kicks pressing down on their bladder.”

Yes, we all know that there is a little baby in there that moves and kicks and feels pain.

But we just keep killing our precious little babies anyway.

So what does a nation that kills 56 million of its own people deserve?

What kind of judgment would fit such a crime?