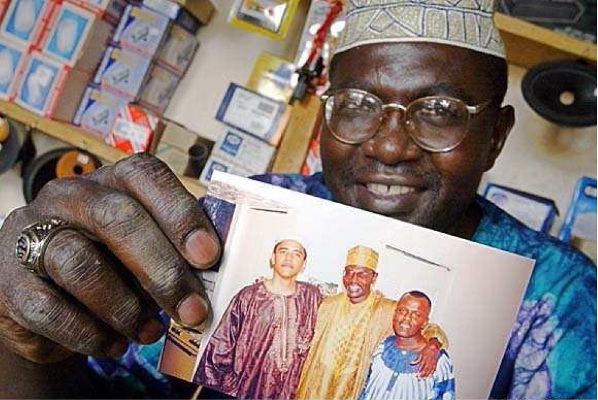 Joel Gilbert, the man who produced the film Dreams from My Real Father, which suggested that Obama’s Communist mentor, Frank Marshall Davis, may be his real father, has just released a bombshell interview with Obama’s brother Malik.

The interview, which took place on April 10, 2015, is bound to stir up more suspicion about the true identity of the usurper-in-chief in the White House.

Malik told Gilbert, “Well, the way that he’s turned and become a different person with the family is the same way that I see him behaving politically. He says one thing and then he does another. He’s not been an honest man, as far as I’m concerned, in who he is and what he says and how he treats people.”

When asked how that made him feel as the oldest brother in the family, Malik said, “Disappointed, disappointed, used, used and also betrayed. In the beginning, I didn’t think that he was a schemer. His real character, his real personality, the real him, is coming out now.”

Malik also confirmed that other family members think the same way about Obama. He said though they put on a “good face,” they are disappointed, upset and angry.

Consider that the first time that Malik met Barack was in 1988, and that was only after Malik convinced Obama to come to Kenya.

Later on, both men were the “best man” at each other’s wedding.

The two began to speak about Barack Obama’s book, Dreams from My Father. Malik claims to have had an original manuscript and said the original title was Where My Father Lies Buried.

“He changed it to Claims of Inheritance, and then I think that’s when he finally changed it to what it is, Dreams of…,” he said. “And he felt like as a representative of his dad, his only elder brother, I should go through the book just to make sure that everything was OK. It was a tedious process and so I just did the best I could.”

When asked if the book was accurate or if there was a lot of embellishment, Malik said, “Well, some of it like my grandfather being detained and all that, I’m very close to my grandmother and I never heard that before, and some of the things weren’t correct especially what my sister had to say.”

Malik also said that he and his Aunt Zeituni made the journey to the US to attend the Inauguration, but did not feel like they were welcome nor were they treated well. However, not only was that the case then, but he went on to say, “Even up till now, it’s like that. If I need to see him, then I have to really make an effort and when I go, I do go, then I go in through the back door or at night. This last visit when I went my aunt died in Boston, I really was crushed and broken.”

When Zeituni died, Malik appealed to Obama for funds to help bury her.

“I told him that she’s our aunt, she’s your father’s sister, she loved you very much and we need to do something for her,” he told Gilbert. “We need around twenty thousand dollars and he said that was too much and that it seemed like she deserved what she got. And I was saying in my mind, ‘what kind of person is this?’ And I told him, ‘you say you’re your brother’s keeper, I don’t feel it, and I don’t see you living up to what you say.’ She had really been good to him when he came. I felt really sad that he would just abandon her like that. I just left. She was stuck there for a month. People were trying to raise money and we finally got her back.”

The conditions in Kenya, and Africa in general are pretty poor. Malik says that there is “extreme hardship, poverty.” He also points out their technology suffers as a result as their infrastructure is poor and they have no electricity. Yet, the man who claims to be his “brother’s keeper” (a completely twisted view of what the Bible speaks of) hasn’t listed a finger or provided anything for the village Malik lives in.

Not sensing any respect from Obama, Malik said it all has made him feel “hurt, crushed.”

“I don’t understand how somebody who claims to be a relative or a brother can behave the way that he’s behaving, be so cold and ruthless, and just turn his back on the people he said were his family,” he said.

Gilbert had sent a copy of his film to Malik to view. Obviously, I question how he viewed it with no electricity, but I’m sure there are areas, especially in government where electricity is readily available.

According to Malik, “There’s a great resemblance. I think Frank Marshall Davis and Barack, they look alike. Some kind of moles I see on his face and Frank, he has those too. There’s a resemblance.”

However, when he was asked if Obama resembled his father, Malik said, “Not really, I don’t. They talk, they say about the years, but no. No. Your movie definitely puts a lot of questions in my mind.”

“I would be willing to do that. I don’t know how I’d deal with it, if it really came out that he really is a fraud or a con,” said Malik.

Gilbert said, “It might be the reason why he made such a big deal about you politically, but personally he doesn’t feel the bond.”

Malik agreed. “Yeah, I agree with that because it’s hard to understand how somebody can make such an about turn and make a big play about where he comes from and then once he gets what he gets, wants nothing to do with that place anymore. We need an explanation and if you can provide the explanation, it would be better for all of us so we won’t be hanging, hoping for nothing. That’s what I really feel for my people is ’cause they keep hoping. Maybe they’re hoping for nothing. Cause he doesn’t mention it any more where he comes from or who his relatives are. He doesn’t say any of those things any more. It’s really disappointing, Joel, but that’s life. We live with it and move on and we wait for the truth to come out.”

“”I’d like to see him be for real, not be so deceptive,” Malik said. “He should live up to his word and be the leader that we expected him to be,” he said. “If he truly is my father’s son, then he needs to behave in a way that if my father was back, was alive, he would be proud of him, because although my dad went through what he went through, he would never abandon his family.”

Well Malik, the problem is that Barack Hussein Obama is a narcissist. That’s why he will never be a good leader. It’s why he has become a tyrant. True leaders have the respect and love of the people they serve. Those that don’t believe they must use the heavy hand of government to force people to do what they want them to. This is Barack Obama.

While some of that makes me feel some sympathy towards Malik and his family, there are other aspects of his dealings that give me pause. You can check some of those aspects out by clicking here.